Tokyo – The importance of good nutrition in the early development of children has been recognized for many decades. Nutritional experiences in early life can have profound and long-lasting effects on body weight in later life. For instance, malnutrition in early life as a result of poor nutrition during
pregnancy and/or the lactation period may be stored on the offspring genome as epigenetic memory and persist into adulthood, thereby increasing the susceptibility to metabolic diseases such as obesity in later life. This area of epigenetics has become one of the fastest-growing and most complex areas of biological science.

A team of researchers led by Tokyo Medical and Dental University (TMDU) previously found that upon the onset of lactation after birth, milk lipids serve as a ligand to activate the nuclear receptor peroxisome proliferator-activated receptor (PPAR)α, which is a key transcriptional regulator of liver fat metabolism. They also demonstrated that administration of a synthetic PPARα ligand to mouse dams during the perinatal period induces enhanced reductions in DNA methylation of fatty-acid β-oxidation genes in the liver of the offspring. DNA methylation is an epigenetic mechanism used by cells to control gene expression.

These findings prompted the researchers to explore whether DNA methylation status of PPARα target genes, which is modulated and established in a PPARα-dependent manner in early life, persists into adulthood.

“In the current study, using a genome-wide analysis of DNA methylation, we identified a few PPARα target genes that underwent ligand-activated PPARα-dependent DNA demethylation during the perinatal period and whose DNA methylation status persists into adulthood,” explains a corresponding author Koshi Hashimoto . “We provide the first evidence that the PPARα-dependent gene Fgf21 demethylation occurs in the postnatal mouse liver, and once established it persists into adulthood and exerts long-term effects on the magnitude of gene expression response to environmental cues, which may account in part for the attenuation of diet-induced obesity (Figure).” 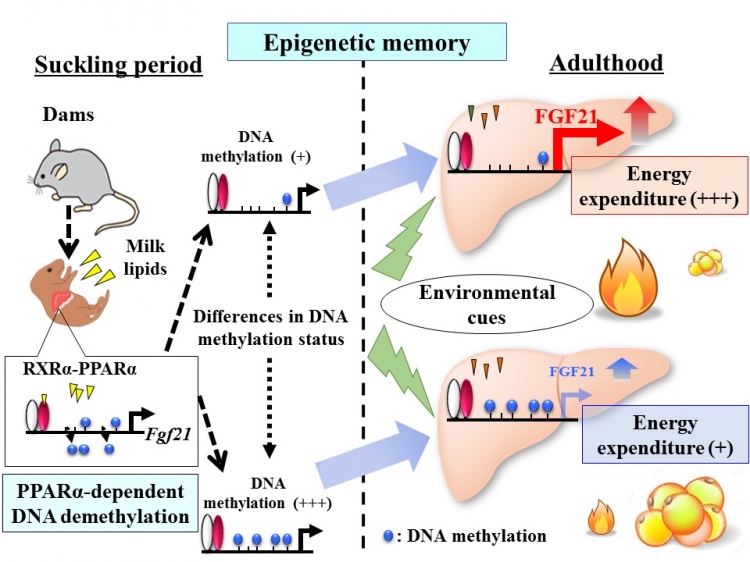 This study represents the first detailed analysis of DNA methylation status of a particular gene throughout life, and the results were recently published in Nature Communications.

“Given that PPARα may act as a sensor of milk lipids during the suckling period, it is likely that the suckling period provides a critical time window for PPARα-dependent Fgf21 demethylation in response to the maternal environment,” adds senior author Yoshihiro Ogawa. “We propose that Fgf21 methylation represents a form of epigenetic memory that persists into adulthood, and it may have a role in the developmental programming of obesity.”

The article, “Epigenetic modulation of Fgf21 in the perinatal mouse liver ameliorates diet-induced obesity in adulthood”, was published in Nature Communications at DOI: 10.1038/s41467-018-03038-w

The nutritional environment in early life can lead to epigenetic changes in the genome that influence the risk of obesity in later life. In a new study, Tokyo Medical and Dental University (TMDU) researchers showed that the Fgf21gene undergoes PPARα–dependent DNA demethylation in the liver during the postnatal period and its status may persist into adulthood. Fgf21 methylation represents a form of epigenetic memory, and may play a role in the developmental programming of obesity.