A research team led by Tokyo Medical and Dental University (TMDU) identified a role for autophagy in determining centrosome number via degradation of the centrosomal protein Cep63.

Tokyo, Japan – Centrosomes play an essential role in cell division by organizing the protein framework on which chromosomes assemble and then separate prior to division into daughter cells. Centrosomes are made up of a pair of centrioles, which are themselves composed of different proteins such as centrosomal protein 63 (Cep63) and polo-like kinase 4. These proteins are thought to regulate the number of centrioles, and thus centrosomes as well, using the ubiquitin–proteasome breakdown pathway that first adds a molecular tag to the protein to be degraded. However, researchers centered at Tokyo Medical and Dental University observed that mouse cells lacking a protein involved in autophagy (a lysosome-based degradation process involving hydrolytic enzymes) contained multiple centrosomes. Their work showed that autophagy is another method of regulating centrosome number. The study was reported in Nature Communications.

Selective autophagy has been shown to break down specific cargos, including proteins and organelles, by delivering them to the lysozyme for digestion. The research team found that cells deficient in autophagy carry extra centrosomes, which was confirmed by the use of autophagy inhibitors in normal cells.

Multiple dots of Cep63 were also visible in cells not undergoing autophagy. Silencing of Cep63 reduced the population of cells with multiple centrosomes while its upregulation increased the centrosome number, thus confirming a role for Cep63 in centrosome number regulation. “Protein staining showed that the Cep63 dots co-localize and directly associate with the p62 protein, which plays a role as a cargo receptor in selective autophagy”, first author Yuichiro Watanabe says. “This revealed that p62 is involved in the autophagic degradation of Cep63.” In normal cells, most Cep63 dots undergo autophagy to regulate the centrosome number. However, in the absence of autophagy, the Cep63 dots persist and interact with p62 or lead to the generation of additional centrosomes. 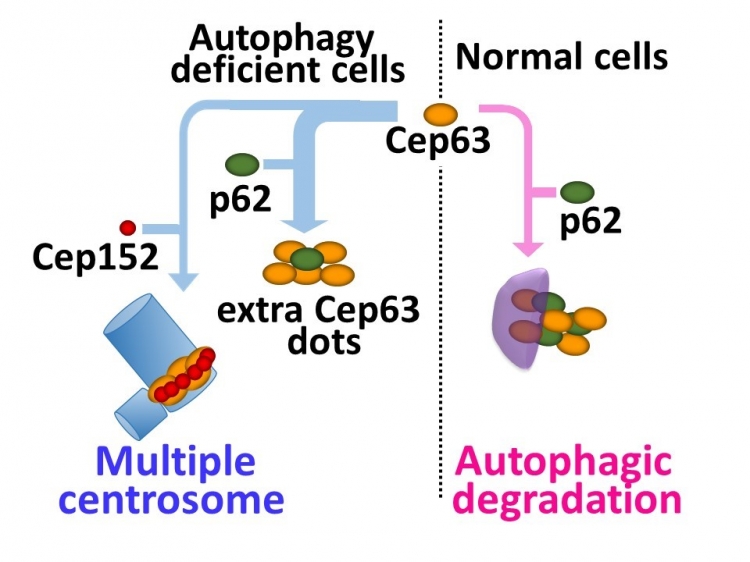 “Mice lacking the expression of p62 and those in which autophagy was inhibited were also found to have more centrosomes than wild-type mice,” corresponding author Shigeomi Shimizu says. “This suggests a key role for autophagy in preventing genomic instability.”

The article “Autophagy controls centrosome number by degrading Cep63” was published in Nature Communications at doi:10.1038/ncomms13508.

Tokyo Medical and Dental University (TMDU)-led researchers identified a role for the cellular degradation process autophagy in controlling centrosome number and ensuring genomic stability. This autophagic regulation was found to be dependent on the Cep63 protein, a centrosome component, which interacts with the p62 protein prior to degradation.