The Placenta - the Smoking Gun in Cardiovascular Disease

Tokyo, Japan – Cardiovascular diseases are the leading cause of death worldwide. Although the development of these disorders is most commonly associated with lifestyle factors like obesity, increasing evidence suggests that events much earlier in one’s life can also play a role. In a recent article published in BMC Medicine, a team led by researchers at Tokyo Medical and Dental University (TMDU) investigated how low birth weight and fetal growth restriction may result from the mother having certain variants of hypertension-related genes. Interestingly, these consequences can occur despite the mother not having high blood pressure during the course of the pregnancy.

Genetic factors from the mother can affect her child through directly passing down certain alleles, but they can also do so indirectly via the intrauterine environment. Studies examining such phenomena have recently suggested that women having genes related to hypertension risk are more likely to give birth to children with low birth weight. Researchers and clinicians therefore assumed that mothers with higher systolic blood pressure would have lower weight newborns. However, no such association was observed. This caused the TMDU group to believe that the intrauterine environment plays more of a role in this case. They hypothesized that all of these observations were caused by effects on the placenta.

“We focused on the placenta because it is an extremely vascular organ. Placental weight also frequently correlates with birth weight,” says Noriko Sato, Associate Professor in the Department of Molecular Epidemiology, who led the study. “Genome-wide association studies have shown that many blood pressure-related genes are involved in vascular system development and function.”

The researchers examined fetal growth in a cohort of Japanese individuals. They used a person’s genetic risk of developing hypertension over a lifetime, called a polygenic risk score, to examine how maternal genetic score influenced placental weight and birth weight. Then the mediating role of the placenta regarding influence on birth weight was formally verified by the method, called a causal mediation analysis.

“We also focused on genetic variants of vascular-related blood pressure genes to see if the impact on birth weight could be ultimately through influence on placental growth,” explains senior author Naoyuki Miyasaka, Professor in Comprehensive Reproductive Medicine. “Nearly 100% of the effect of “vasculature-related” genetic score on birth weight was indeed mediated by placental weight.”

The team also found an inverse association between maternal systolic blood pressure genetic risk score and the rate of fetal growth towards the end of pregnancy, specifically around 36 weeks of gestation.

“Our findings suggest that the maternal blood pressure-related genes are associated with undesirable fetal growth deceleration by affecting the placental growth,” explains Sato. “The intrauterine environment constructed by the placental vasculature is the primarily relevant factor here rather than the mother’s blood pressure at the time of pregnancy.”

This study provides strong evidence that maternal genes that are associated with hypertension risk can indirectly affect fetal growth and cause long-term impacts on a child via effects on the placenta. Fetal growth restriction in late pregnancy occurs in more than a few percent of pregnancies, and it is mostly of unknown cause and difficult to predict. However, incorporating maternal genetic risk information into clinical practice could enable screening and improved perinatal management for mother–child health. Furthermore, the results contribute to the development of new therapeutic targets for the treatment and prevention of hypertension and cardiovascular diseases. These results are fascinating, because they provide data that can help prevent the development of disease decades before potential onset. 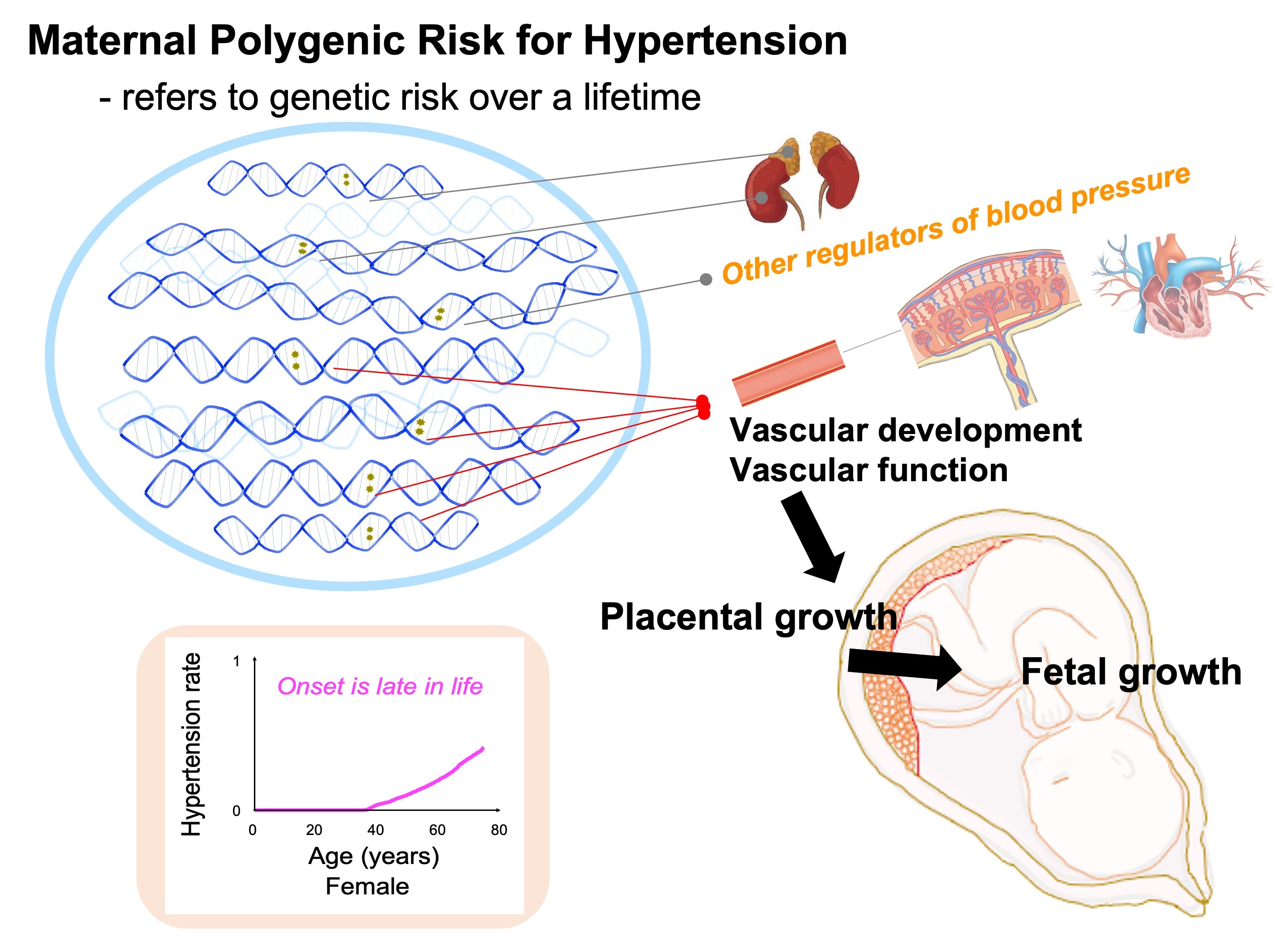 Schematic summarizing the major findings of this study
The collective activity of massive genes, known as polygenic activity, is involved in the development of hypertension. Some genes are expressed in the kidneys and adrenal glands to regulate blood pressure, but most are related to the development and function of the vascular system. The expression and function of these genes vary from person to person because of differences in the nucleotide sequence (single nucleotide polymorphisms (SNPs) marked with asterisks) that may be associated with disease. The sum of these differences is assessed by the polygenic risk score (PRS). This represents an individual's genetic risk of developing hypertension over their lifetime.
Although maternal hypertension PRS is inversely corelated with offspring birth weight, the actual blood pressure of pregnant women had no such relationship with birth weight. Hypertension develops at an older age in women. This study revealed that it is not blood pressure, but the placenta, a vascular organ, that mediates the relationship between maternal hypertension PRS and birth weight. A higher maternal genetic risk of hypertension results in reduced growth of the placenta, which in turn hinders fetal growth.

###
The article, “Placenta mediates the effect of maternal hypertension polygenic score on offspring birth weight: a study of birth cohort with fetal growth velocity data,” was published in BMC Medicine at DOI: 10.1186/s12916-021-02131-0

Researchers from Tokyo Medical and Dental University (TMDU) examined fetal growth in a cohort of Japanese individuals to understand any effects of maternal high blood pressure-related genes. Variants of these genes had significant impacts on the placental weight as well as birth weight, but little on maternal blood pressure. The group concluded that the maternal genetic risk of hypertension influences infant birth weight by affecting the placental growth. Such changes in intrauterine environment could indirectly increase risk of long-term cardiovascular disease in a child.