"Degrader of Proteins Required for the Origin of Early Cancerous Lesions"

"Degrader of Proteins Required for the Origin of Early Cancerous Lesions"

Tokyo – Pancreatic cancer is a particularly deadly form of human cancer, usually diagnosed at a late stage, resistant to treatment, and with a consequently high mortality rate. Early carcinogenesis in the pancreas involves a cellular change from acinar to ductal cells typically caused by inflammation, but which is transient in the absence of mutations in the KRAS gene. The presence of KRAS mutations causes the altered cells to form precancerous lesions (PanIN). Advanced cancers such as pancreatic cancer also have an increased activity of specific proteins known as proteasomes, which break down other proteins that are damaged or unwanted. However, the role of proteasomes in the beginning of such cancers has not been clear. Researchers needed a means of studying proteasome activity in vivo at the start of cancer development.

In a study reported in Scientific Reports, a research team led by Tokyo Medical and Dental University (TMDU) establishes a transgenic mouse model carrying a proteasome reporter system linked to a green fluorescent protein. This system had previously been used in living cells and in mice carrying human primary tumor tissue implants, but never before in a transgenic mouse. 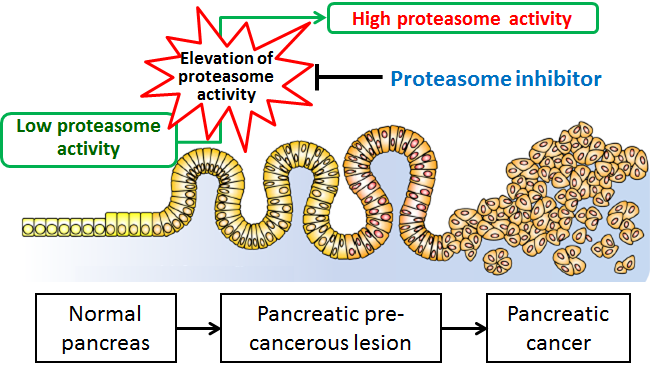 The model showed that normal acinar cells in the pancreas have low proteasome activity and that this is elevated in PanIN lesions. Treatment of the transgenic mice with a peptide that causes pancreatic inflammation increased proteasome activity and lesion formation for a brief period in the absence of KRAS mutations and continuously in their presence.

“Use of a proteasome inhibitor reduced PanIN development without affecting the formation of earlier, smaller lesions”, study corresponding author Shinji Tanaka says. “Existing PanIN lesions were also not affected by inhibiting proteasome activity, suggesting that the early lesion–PanIN sequence is an irreversible process.” These findings highlighted the importance of proteasomes in PanIN initiation but not continuation.

The team also investigated the expression of proteins involved in signaling pathways common to many cancers by staining pancreatic tissues of the transgenic mice. “Pathway components were active in PanIN lesions, but their expression was reduced following proteasome inhibition,” first author Takaki Furuyama says. “This suggests that proteasome activity controls the expression of pathway factors associated with inflammation and the cell cycle.”

The article, “Proteasome activity is required for the initiation of precancerous lesions” was published in the Nature journal Scientific Reports at DOI:10.1038/srep27044

Tokyo Medical and Dental University-led researchers generated transgenic mice as a model to study the role of proteasomes (protein degraders) in early pancreatic cancer development. The team showed that proteasome activity is needed for initiation but not maintenance of precancerous pancreatic lesions. This knowledge may help develop early detection methods for cancer and more effective treatments.