Tokyo, Japan – What does hematopoietic cell transplantation (HCT)—where stem cells that can differentiate into different types of blood cells are taken from a donor individual and transplanted into a recipient individual—have to do with bacteria in the digestive tract, commonly known as the gut microbiota? Although they might seem unrelated, researchers in Japan have recently uncovered a link between the two.

X-linked inhibitor of apoptosis protein (XIAP) deficiency is a rare immunodeficiency disorder that presents in infancy or early childhood. It is often accompanied by severe inflammatory bowel disease (IBD) that doesn’t respond well to drugs, but patients can be cured by HCT. In a study published last month in The Journal of Allergy and Clinical Immunology: In Practice, researchers from Tokyo Medical and Dental University (TMDU) have revealed that, as well as improving symptoms, HCT normalizes the gut microbiota of patients with IBD associated with XIAP deficiency.

To do this, the researchers examined the gut microbiota of patients before they underwent HCT, and then looked at the microbiota again after HCT. They then compared the makeup and diversity of each patient’s microbiota with those of close relatives of the patients, who were used as healthy controls.

“As expected, almost all patients achieved remission from IBD,” explains Hirokazu Kanegane, senior author. “We also found that the gut microbiota of patients went from being very different to that of their family members before HCT, to very similar after HCT.”

In particular, the gut microbiota of each patient pre- HCT was less diverse and contained fewer bacteria from the Bacteroidetes group, which have been linked to diabetes, obesity, and irritable bowel syndrome. After HCT, both microbiota diversity and makeup were very similar to those of close relatives.

“Our findings indicate that HCT decreases gut inflammation and restores the gut microbiota in patients with XIAP deficiency,” says Kanegane. 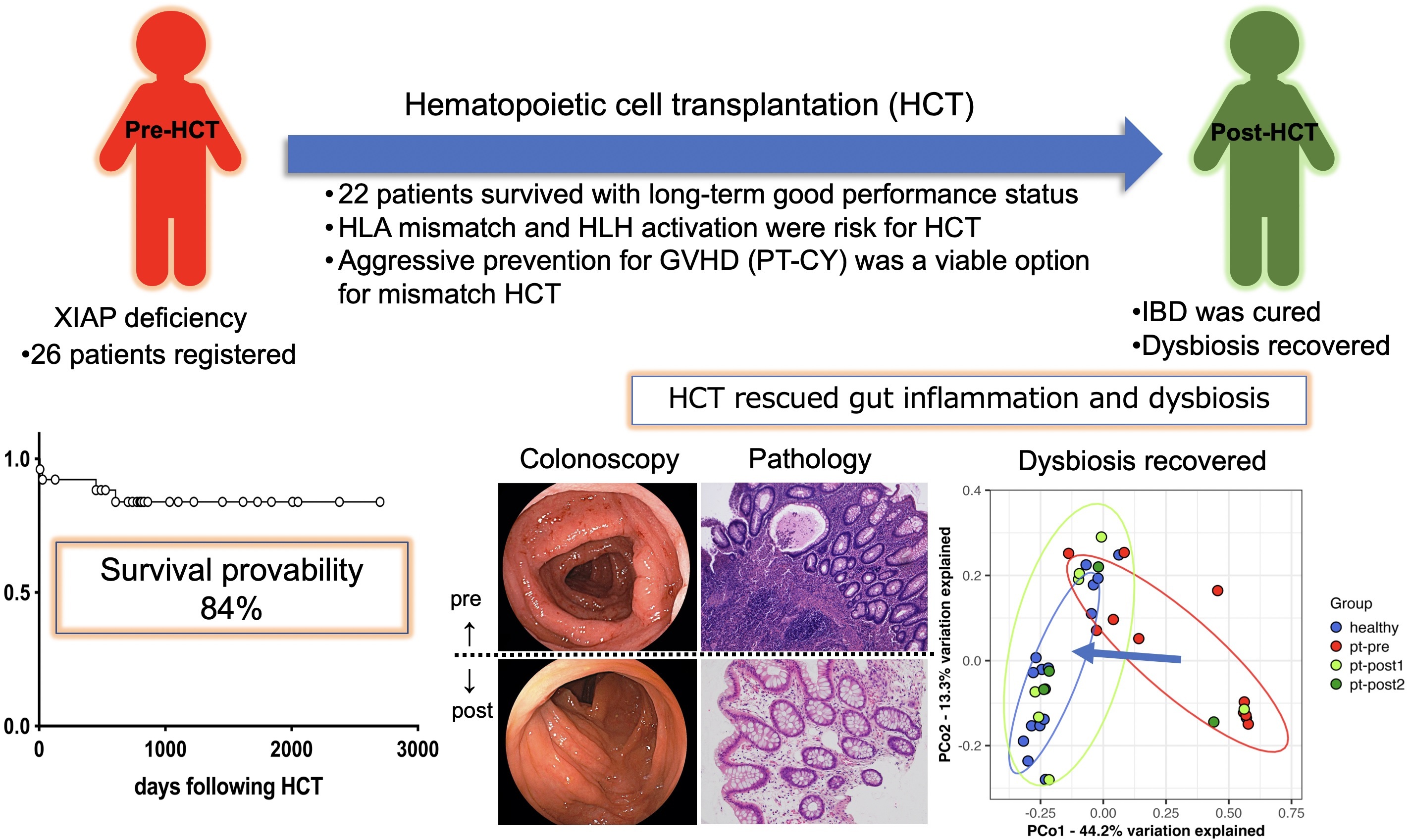 The article, “Hematopoietic cell transplantation rescues inflammatory bowel disease and dysbiosis of gut microbiota in XIAP deficiency,” was published in The Journal of Allergy and Clinical Immunology: In Practice at DOI: 10.1016/j.jaip.2021.05.045

Researchers from Tokyo Medical and Dental University (TMDU) have found that patients with inflammatory bowel disease (IBD) associated with X-linked inhibitor of apoptosis protein (XIAP) deficiency have altered gut microbiota, which is normalized by hematopoietic cell transplantation (HCT). If the survival rate of this technique can be improved, HCT will become an even better option for the treatment of IBD associated with XIAP deficiency, which has poor outcomes when left untreated.

JOURNAL：The Journal of Allergy and Clinical Immunology: In Practice