“Discovery of a novel source of dendritic cells, the control tower of the immune system”

“Discovery of a novel source of dendritic cells, the control tower of the immune system”

– A new avenue for vaccine development and autoimmune disease treatment –

Our research group, led by Prof. Toshiaki Ohteki at the Department of Biodefense Research, Medical Research Institute, Tokyo Medical and Dental University, has discovered a novel source of dendritic cells (DCs), considered the “control tower” of the immune system. DCs consist of conventional DCs (cDCs) and plasmacytoid DCs (pDCs), both of which play critical regulatory roles in the immune system. In particular, pDCs are characterized by their capacity to produce large amounts of type I interferons (IFNs). This function could be important in medical applications for treating viral infections and autoimmune diseases. In 2007, in collaboration with a research group in Switzerland, we identified progenitor cells committed to the DC lineage for the first time. However, these progenitors gave rise to many more cDCs than pDCs, implying that there must be another unidentified type of DC progenitor that serves as a major source of pDCs. This time, we successfully identified a DC progenitor with prominent pDC differentiation potential. Our findings provide insight into the DC differentiation pathways and may lead to progenitor-based therapies for viral infections and autoimmune diseases. The study was supported by a research grant from JST, CREST, and was published online in Immunity on April 25, 2013.

Main findings and significance of this study

We focused on finding progenitor cells that serve as a major source of pDCs and that were closely related to the previously identified ones. After a long search, we identified a new type of DC progenitors with prominent pDC developmental potential. The number of pDCs generated from each of the new DC progenitor cells is several times higher than that from the previously reported DC progenitor (Figure 1). Importantly, the new DC progenitor highly expresses E2-2, an essential transcription factor for pDC development (Figure 2). In addition, this progenitor never gives rise to cells outside the DC lineage. Since both the previous and newly identified DC progenitors strictly give rise to DCs, we designate them together by the term, common DC progenitors (CDPs). We further found that the CDPs appear to be directly derived from lymphoid-primed multi-potent progenitors (LMPPs) (Figure 3). DCs have recently received much attention as a potential target for vaccine development against infectious diseases and cancer. The identification of DC progenitors that produce 500-1,000 DCs and no other hematopoietic cells may be valuable in the development of therapeutic applications for infectious diseases, cancers, and autoimmune diseases. 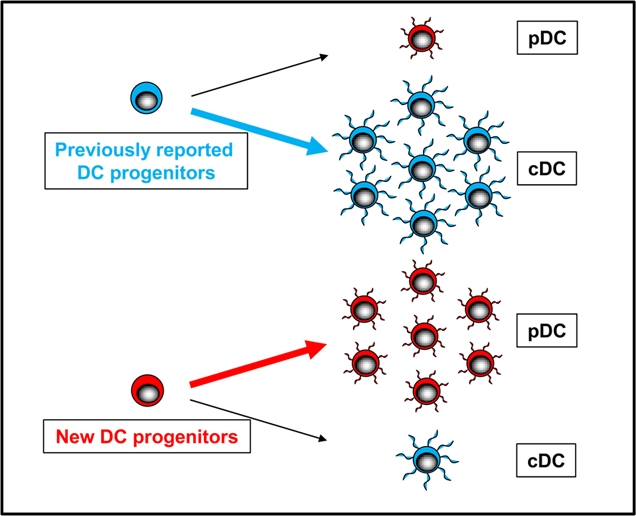 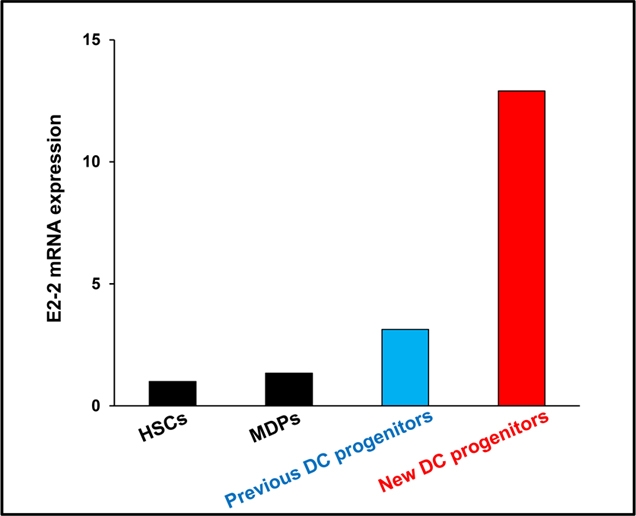 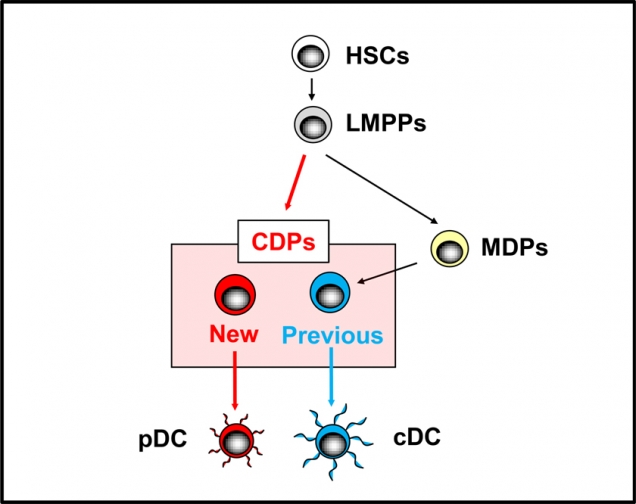