Living for Today: Exposure to Disaster May Cause Impatience in Children

Living for Today: Exposure to Disaster May Cause Impatience in Children

Tokyo – Living through a tragic event might make us more inclined to live for the moment, but not always in a good way. Research is looking into the psychological after-effects among children who survived the 2011 Great East Japan Earthquake, and a recent study may have made a connection: the children may forgo greater long-term reward for short-term pleasure.

Among the traumatic experiences in the quake and subsequent tsunami that killed almost 16,000 people, some survivors witnessed people washed away and had their houses destroyed. A study from Tokyo Medical and Dental University (TMDU) analyzed data collected in 2012–2014 on 3- to 5-year-old survivors of the disaster.

The researchers found that some of the children tended toward what's called “delay discounting behavior”, or favoring smaller short-term rewards over larger rewards given later. The findings were published in PLOS ONE. 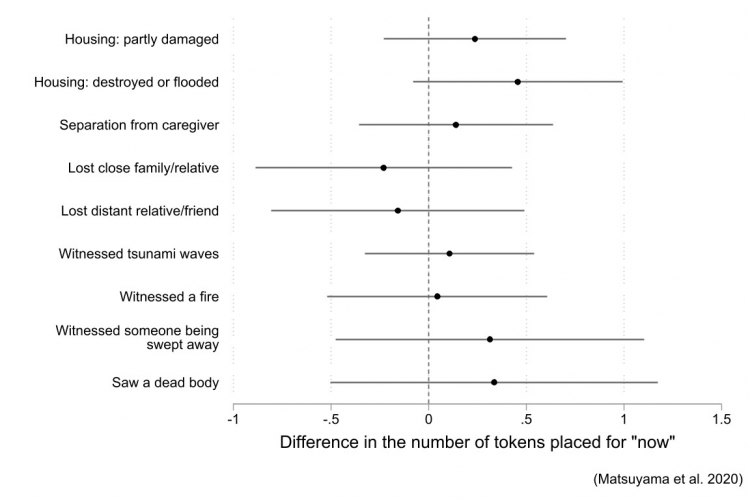 Figure. Association between traumatic experiences and delay discounting of children. Every traumatic experience was separately included. Models were adjusted for child’s age, sex, maternal education, household subjective economic status before the disaster, and household income at the follow－up survey. Children whose house was destroyed or flooded showed a higher delay discounting although the association was not statistically significant.

"The shock of being in a disaster can change our trust in the world, and this may lead to impatient behavior," study co-author Takeo Fujiwara says. "But we don't know a great deal about children who go through this process."

The children in the study were interviewed to uncover what trauma(s) they had experienced. They later took part in a time-investment exercise to gauge their ability to delay gratification. They were offered five tokens: one token equaled one candy now or two a month later. They were asked to assign each of the five to “now” or “one month later.”

Among the various forms of trauma, which included losing a caregiver, witnessing the tsunami waves or fires, or seeing a dead body, the children whose had lost their housing had higher delay discounting. In other words, they assigned more tokens to "now," showing preference for smaller reward in the short term.

Interestingly, the researchers found no association between delay discounting and other traumas. So, why this association with housing loss?

“Children who lose their housing may have their lives disrupted for a long time, as they live in temporary or other housing” first author Yusuke Matsuyama says. “That may differ from witnessing a life-threatening event, which is traumatic but children may recover after they go through a grieving period.”

After having experienced a disaster, there may be prolonged periods of recovery and instability. Being without housing in this period may induce stress or sadness, which may lead to impatience. The TMDU study offers specific insight into the emotions of children who survive this trauma.

The article, “Delay discounting in children exposed to disaster,” was published in PLOS ONE at https://doi.org/10.1371/journal.pone.0243994

A Tokyo Medical and Dental University study on children sought a connection between impatience and living through a disaster: the 2011 Great East Japan Earthquake. A game simulating ability to delay reward showed that, among traumas, children who lost their housing were more likely to seek immediate gratification. Those experiencing other traumas did not show this tendency. This stress and instability of a child losing their home may increase impatience.