Revealing the function of Mkx in periodontal ligament homeostasis

In molecular biology, transcription is the process of copying a segment of DNA into RNA, whereas a transcription factor (or TF) is a protein that controls the rate of copying this segment. The segments of DNA transcribed into RNA molecules that can encode proteins are said to produce messenger RNA (mRNA). The work of TFs is to turn genes on or off in order to ensure that they are expressed in the correct cells in the right amount, at the right time and in the right place.

New research at TMDU into the homeobox TF called Mohawk (Mkx) on the peridontal ligament (PDL) continues to reveal the TF’s importance in the development and maintenance of the PDL. Mkx itself is a transcription factor that is essential for the development and homeostasis of tendon and ligament. However, the exact functions of Mkx in the cell populations comprising the PDL have not yet been made clear.

The PDL is basically the soft tissue between teeth and bone and it is this that actually holds your teeth in place. This tissue allows the tooth to function under the duress of chewing and also absorbs the pressure produced by clenching and grinding. In the case of gum disease, the loss of the PDL can result in the teeth having no support. The PDL is also prone to inflammation and cannot be restored once lost, thus chronic inflammation, induced by oral bacteria, can also be the cause of metabolic diseases which can have a critical effect on health.

The abovementioned new research conducted at TMDU using single cell RNA sequencing shows that Mkx plays an important role in maintaining PDL homeostasis (the balance between the independent physiological processes) by regulating specific cell populations and gene expression in the PDL. The present study aims to shed light on the effects of a Mkx deficiency on PDL cellular heterogeneity and also differences between gene expression in PDL tissues using single-cell RNA sequencing. It was found that rats deficient in Mkx show increased ossification in PDL and it is thought that Mkx and Scx (Scx being another key transcription factor of PDL) might play similar roles in homeostasis by maintaining the ligament-like properties of the PDL. 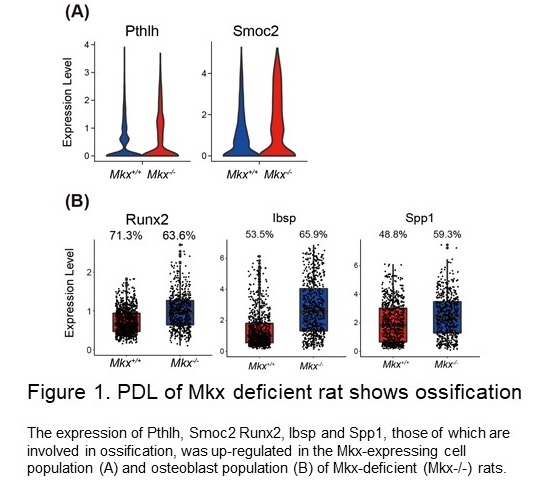 This being said however, while the loss of Mkx promotes ossification in the PDL, conversely a significant increase in Scx-expressing cell population and the decreased expression of genes involved in ossification in the Mkx-expressing cell population suggested that the loss of Mkx promotes compensatory mechanisms to maintain PDL homeostasis via Scx. It was found that few cells expressed both Mkx and Scx among the mesenchymal stromal cells together. These results suggested that cells expressing Scx are greater among cell populations that produce collagen, whereas those expressing Mkx are found among populations that produce oxytalan fibers and proteoglycan. The present study using scRNA-Seq revealed that Mkx and Scx expressions are mutually exclusive, which suggests that cells expressing Mkx and Scx are localized to different regions in the PDL and play different roles in PDL development and homeostasis. 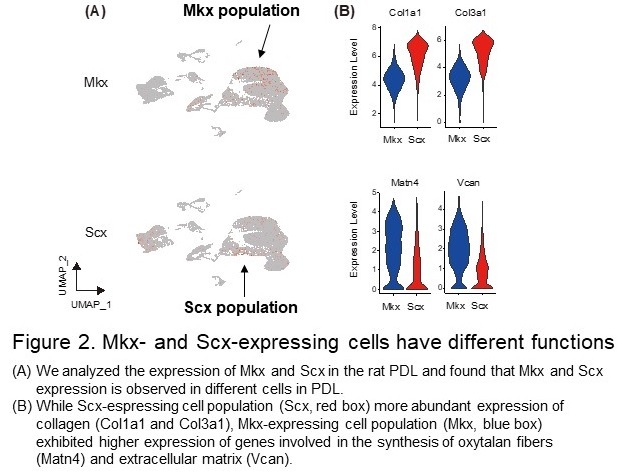 This expression of Mkx and Scx suggests that these two TFs actually play different roles in the development and maintenance of the PDL. In addition, the expression of genes involved in ossification in mesenchymal cells and osteoblasts and the inflammatory responses of macrophages was increased in Mkx-/- PDLs, which could lead to hypoplastic PDL formations. These results suggest that Mkx is involved in ankylosis (which is an abnormal stiffening and immobility of a joint due to fusion of the bones) and also gum disease, which is an extremely common illness afflicting millions of patients.

JOURNAL：Frontiers in Cell and Developmental Biology