Tokyo Medical and Dental University (TMDU)-led researchers identify a protein critical to the early stages of infection of cells by HIV, offering a potential target for anti-HIV treatment

Tokyo, Japan – When a virus enters a cell, one of the first steps in the process of infecting that cell is removal of the protein coat that surrounds the virus’s genetic material. The virus can then produce DNA from its own genes and insert it into the cell’s genome. This allows the virus to hijack the host cell’s machinery, forcing the cell to make copies of the virus.

HIV-1 is the most common form of HIV, the virus that causes AIDS. Now, a team led by researchers at Tokyo Medical and Dental University (TMDU) have identified a protein produced by the host cell that is necessary for correct removal of the protein coat of HIV-1. The study was published in PLOS Pathogens.

In their search for factors involved in HIV-1 infection, the team interfered with the activity of over 15,000 host cell genes to identify those whose suppression allowed the cells to survive exposure to the virus. This led them to focus on a protein called maternal embryonic leucine-zipper kinase (MELK).

“Depleting cells of MELK reduced HIV-1 infectivity,” lead and corresponding author Hiroaki Takeuchi says. “The virus entered the MELK-depleted cell normally, but its protein coat was not removed correctly so it was unable to efficiently produce DNA from its own genetic material. When we restored MELK, the infection process was also restored.”

The researchers went on to investigate how MELK interferes with the protein coat removal step of infection. They discovered that MELK alters the coat by attaching a biologically active modification at a specific location. This in turn ensures correct removal of the coat. When the team engineered a mutated version of HIV-1 that was already modified at this location, they found that MELK was no longer needed for coat removal. 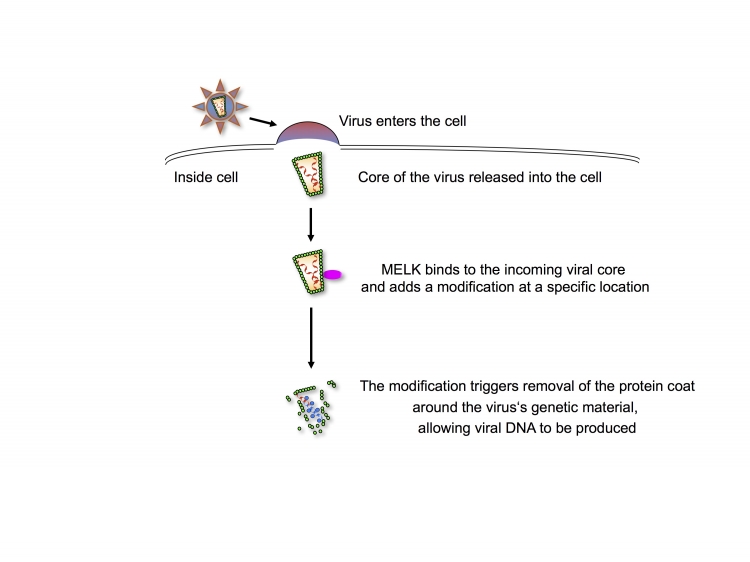 Fig: Modification of the viral protein coat by MELK regulates its removal to allow viral DNA synthesis
Shortly after HIV-1 entry, MELK produced by the target cell regulates removal of the protein coat (the capsid, CA, which is an important part of the core of the virus) by adding a modification at a specific location. This regulated coat removal promotes optimal production of viral DNA, allowing the infection process to proceed efficiently.

“Our results reveal a previously unrecognized mechanism involved in removal of the protein coat of HIV-1 and contribute to our understanding of the early stages of the viral life-cycle,” corresponding authors Hiroaki Takeuchi and Shoji Yamaoka say. “Furthermore, our findings suggest that MELK is a potential target for anti-HIV-1 therapy.”

The article, “Phosphorylation of the HIV-1 capsid by MELK triggers uncoating to promote viral cDNA synthesis”, was published in PLOS Pathogens at DOI: 10.1371/journal.ppat.1006441.

A Tokyo Medical and Dental University (TMDU) -led research team identified a protein, MELK, required for the HIV-1 virus to efficiently infect its target cells. MELK, produced by the cell, is necessary for removal of the protein coat around the HIV-1 virus, which is essential for the infection process. The team further revealed that MELK modifies the protein coat at a specific location to promote its removal. These findings offer a potential new target for anti-HIV treatment.