Fujitsu and TMDU applied this technology to gene expression level (2) data obtained from cancer cell lines in order to analyze drug resistance (3) against anticancer drugs, and succeeded in extracting a new causal mechanism of a previously unknown gene that suggests a cause of resistance to lung cancer drugs. The new technology is expected to contribute to the acceleration of drug discovery and the realization of cancer therapies individualized for each patient.

The technology was developed under the theme of "elucidation of the cause and diversity of cancer using large-scale data analysis and AI technology," an initiative supported by TMDU, Kyoto University and Fujitsu as part of the supercomputer Fugaku achievement acceleration program (4).

Background
Even if a patient receives a targeted cancer drug (5) therapy, the appearance of drug-resistant cancer cells represents an ongoing threat to full remission. The mechanism for how certain cancers become drug resistant remains unclear, however, and researchers continue to work on new methods of analysis that shed light on how cells that have multiple driver mutations (6) acquire drug resistance. In drug development and clinical trials involving drug repositioning (7), it is important to identify patients for whom drugs are anticipated to have an effect. However, the effectiveness of drugs may differ depending on the organ and the individual and variations in gene expression, and the number of patterns combining expression levels of multiple genes exceeds 1,000 trillion (8). A comprehensive search of all 20,000 genes in the human genome would thus take more than 4,000 years with a conventional computer and finding ways to accelerate the process represents a major challenge.

Newly developed technology
Fujitsu implemented parallel conditional and causal algorithms to maximize computational performance with the supercomputer Fugaku to analyze the human genome within a timeframe needed for practical research. By utilizing Fujitsu’s “Wide Learning” (9) AI technology to extract combinations of potential genes relating to the emergence of drug resistance based on statistical information, Fujitsu developed a novel technology that makes it possible to conduct a comprehensive search within a day.

Results
As a result of running data of the Dependency Map (DepMap) (10) portal using this technology on the supercomputer Fugaku, Fujitsu and TMDU were able to search the entire human genome for conditions and causality within a single day and determine the genes that cause resistance to drugs used to treat lung cancer (11).

Comment from Prof. Seiji Ogawa, Graduate School of Medicine, Kyoto University
Promising technologies like Fujitsu’s AI technology for scientific discovery (“Wide Learning”) may one day contribute to the discovery of biomarkers, which represent an area of growing interest in drug development. The key to the success of new drug development is to identify patients who are expected to benefit from new drugs and conduct clinical trials. If the marker that predicts who will benefit from the drug is known, the cost of clinical trials can significantly be reduced and the probability of success by conducting individual clinical trials can be increased. From this point of view, pharmaceutical manufacturers and others are expected to be very interested in this technology. The fact that it has been implemented using Fugaku has also raised expectations.

Future Plans
Moving forward, Fujitsu and TMDU will conduct a multilayered and comprehensive analysis that combines various data including time axis and location data with the aim of accelerating medical research, including in the field of drug efficacy, as well as to shed light on the causes of cancer.
Fujitsu and TMDU will also collaborate in experimental research in the fields of drug discovery and medicine. TMDU will further utilize the technology developed in this research to promote research on strategies for intractable diseases such as cancer.
In addition to medical care, Fujitsu will utilize the new technology to resolve challenges in a variety of fields, including marketing, system operations and manufacturing.

Acknowledgements
This research was conducted as part of Ministry of Education, Culture, Sports, Science and Technology's Fugaku Achievement Acceleration Program “Understanding the Origin and Diversity of Cancer through Large-scale Data Analysis and Artificial Intelligence Technologies” (JPMXP 1020200102). A part of the research was conducted with the computational resources of supercomputer Fugaku (Issue #: hp 200138, hp 210167).

Notes
(1) Supercomputer "Fugaku": A computer installed at RIKEN as a successor to the supercomputer "K." From June 2020 to November 3, it ranked first in 4 categories in the supercomputer rankings for 4 consecutive years. Full operation started on March 9, 2021.
(2) Gene expression level: Amount of RNA copied from DNA (the same nucleic acid as DNA synthesized by transcription using some DNA sequences as templates).
(3) Drug resistance: A phenomenon in which the effect of a drug weakens while the drug is being administered.
(4) Supercomputer Fugaku Achievement Acceleration Program: Program started in May 2020 by the Ministry of Education, Culture, Sports, Science and Technology with the aim to achieve early results.
(5) Targeted drug: A drug designed to act only on the molecule (protein, gene, etc.) that is causing the disease.
(6) Driver mutations: A genetic mutation that directly causes the development or progression of cancer.
(7) Drug repositioning: The application of existing drugs developed and approved for the treatment of one disease to the treatment of another disease.
(8) More than 1,000 trillion: Even if the expression level of each gene is restricted to a combination of 50 major genes known to be related to cancer and the expression level of each gene is classified into 2 categories (e.g., "high" or "low" gene expression), the condition number is 2 to the power of 50, which exceeds 1,000 trillion.
(9) Wide Learning: Official site "Hello, Wide Learning!" (https://widelearning.labs.fujitsu.com/en/index.html)
(10) Dependency Map (DepMap): Data on the sensitivity and resistance of approximately 4,500 drugs to approximately 600 different cancer cell lines, provided by the American Broad Institute. Mutation information of cancer cell lines and expression data of all genes are included. (https://depmap.org/portal/)
(11) Fujitsu and TMDU analyzed gene expression data from DepMap of approximately 300 cancer cell lines, sensitivity and resistance data of Gefitinib (molecularly targeted drug used to treat lung cancer and other cancer types), and comprehensively searched for conditions and mechanisms of cancer cell lines that do not respond to Gefitinib. Fujitsu and TMDU identified conditions under which the expression levels of three transcription factors (genes that control gene transcription (synthesis of RNA)), ZNF516, E2F6, and EMX1, were low. In lung cancer cell lines that meet these conditions, a mechanism triggered by the transcription factors SP7 and PRRX1 was discovered as further potential causes of drug resistance in cancer cells (see reference image). 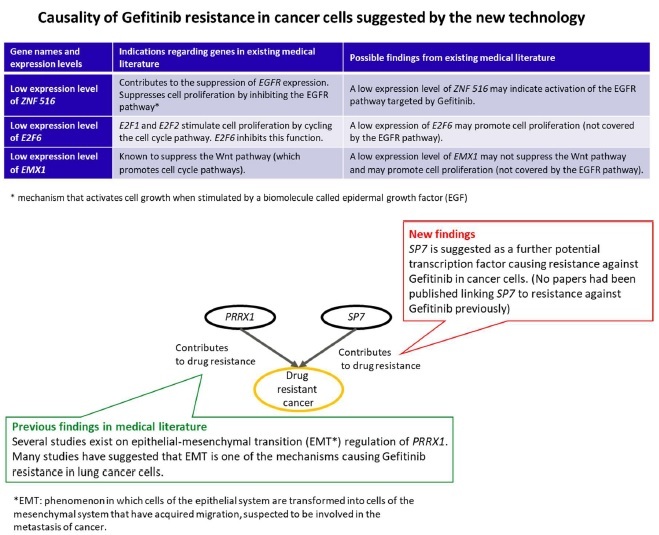 About Fujitsu
Fujitsu is the leading Japanese information and communication technology (ICT) company offering a full range of technology products, solutions and services. Approximately 126,000 Fujitsu people support customers in more than 100 countries. We use our experience and the power of ICT to shape the future of society with our customers. Fujitsu Limited (TSE:6702) reported consolidated revenues of 3.6 trillion yen (US$34 billion) for the fiscal year ended March 31, 2021. For more information, please see www.fujitsu.com.

About Tokyo Medical and Dental University
Tokyo Medical and Dental University (TMDU) is Japan’s only comprehensive medical university and graduate school, and has provided advanced medical treatment through a fusion of the medical and dental fields and worked to cultivate “professionals with knowledge and humanity.” TMDU contributes to human health and the well-being of society by fostering outstanding healthcare professionals with a humane and global outlook.