Researchers at Tokyo Medical and Dental University (TMDU) identified two new molecules of the microRNA class that stop or reverse a transition of cell type associated with cancer cell migration and invasion; these molecules increased the effect of the widely used chemotherapy drug gemcitabine on pancreatic cancer.

Tokyo, Japan – Pancreatic cancer is a particularly devastating disease because of the difficulty of identifying it at an early stage, and the difficulty of treating it when discovered at a late stage. Although various treatment options such as surgery, radiotherapy, and chemotherapy are available, the mortality rate remains extremely high, so efforts are increasingly being targeted at improving its detection and treatment.

In a study reported recently in the journal Scientific Reports, a team centered at Tokyo Medical and Dental University (TMDU) identified two molecules that can improve the response of pancreatic cancer to a common chemotherapy drug and also predict the prognosis of pancreatic cancer patients. These findings could pave the way to novel combined treatments for this disease.
Tumors can develop and spread via various processes, one of which is the epithelial–mesenchymal transition (EMT). In this transition, cells lose the ability to adhere strongly to each other, enabling them to disperse and invade tissues, where they can become established and multiply. In this new study, researchers employed a cell-based reporter system to screen a collection of over 1000 gene-regulatory factors called microRNAs for the ability to influence this transition and identified some with particularly potent effects.

“Our system is based around a molecule called E-cadherin, which suppresses tumor growth in part by maintaining cells in an epithelial rather than a mesenchymal state,” Tomoki Muramatsu of TMDU says. “Using this system, we can visualize the expression of a fluorescent protein and monitor the transcriptional activity from the E-cadherin promoter region as fluorescent intensity, allowing the screening of EMT-suppressive miRNAs.” (Figure 1). 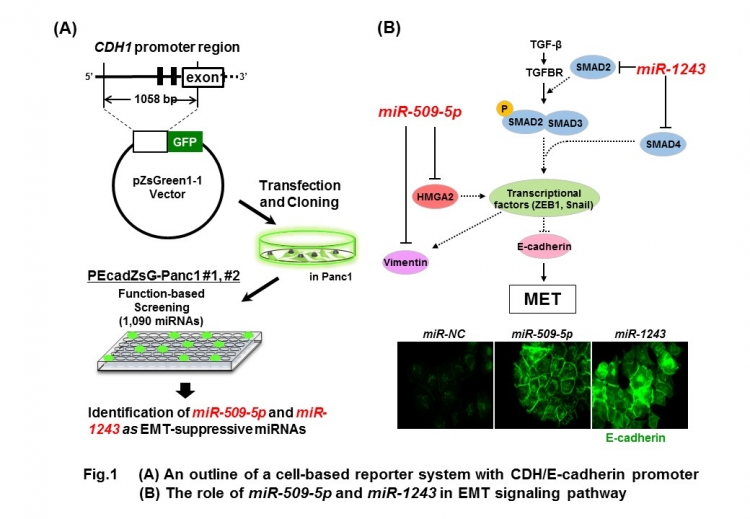 “When we analyzed these microRNAs in more detail, we found that they reduced cancer cell migration and invasion by targeting genes related to EMT, essentially preventing or reversing this,” Johji Inazawa says. “This effect was particularly interesting when it was observed alongside the effect of the chemotherapy drug gemcitabine. When these microRNAs were administered, gemcitabine was much more effective at killing cancer cells.” 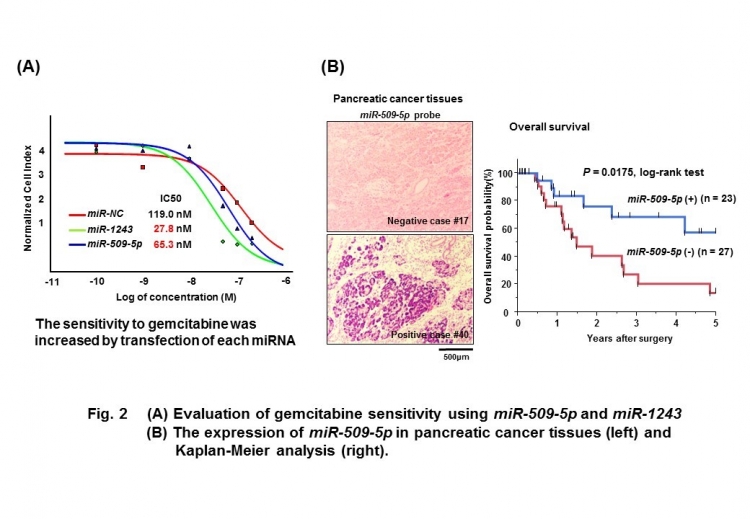 The findings suggest that therapies combining these microRNAs and gemcitabine could improve our ability to treat pancreatic cancer, and measurement of microRNA levels could also provide a guide to the prognosis in such cases.

The article “miR-509-5p and miR-1243 increase the sensitivity to gemcitabine by inhibiting epithelial-mesenchymal transition in pancreatic cancer” was published in Scientific Reports at doi: 10.1038/s41598-017-04191-w.

TMDU researchers revealed that, in pancreatic cancer, the microRNAs miR-509-5p and miR-1243 can promote E-cadherin expression and thereby reduce the likelihood of cells undergoing epithelial–mesenchymal transition, or indeed reverse this transition. This ability to stop cells from adopting a phenotype linked to high migration and invasiveness was also shown to synergistically increase the cancer cell-killing efficacy of gemcitabine, which is promising for developing more effective combinatorial treatments for pancreatic cancer.