July 20, 2022
Researchers at Tokyo Medical and Dental University (TMDU) demonstrate an enzyme-based biosensor in the form of an electrospun polymer mesh that can detect volatile organic compounds, which may help healthcare providers more rapidly disease screening and metabolism assessment.
Tokyo, Japan – Scientists from the Tokyo Medical and Dental University (TMDU) introduce an easy method for manufacturing biosensors made from electrospun polymers. By embedding enzymes inside the polymer string, the enzymes were operational even in a dry state. These biosensors can be used to screen certain diseases, as well as to monitor environments for specific chemical compounds in the air.

Enzymes are biological catalysts that allow many chemical reactions vital for life to progress much faster than they normally would. One of the remarkable features of some enzymes is their strong specificity, in which the reaction will work with certain target molecules, but not with even very similar ones. Scientists have known for a long time that these properties can be utilized to create highly sensitive and accurate biosensors for specific substances, including those associated with the disease. However, most conventional biosensors require keeping the enzyme in a wet condition so that they do not become denatured and lose their ability to catalyze reactions.

Now, a collaborative team of researchers from TMDU and Waseda University led by Professors Kohji Mitsubayashi and Naoya Takeda created a non-invasive biosensor for volatile organic compounds in the form of a solid mesh. A solution of polyvinyl alcohol was first combined with the enzyme alcohol dehydrogenase and the coenzyme nicotinamide adenine. The mixture was forced through a nozzle at a high voltage. Thin fibers of polymer accumulated on the collector plate, with the enzyme embedded inside, until a solid mesh was obtained. The presence of ethanol vapor could be detected based on a significant increase in fluorescent activity.

“We found that immobilizing the enzymes inside the mesh preserved their activity, even under ambient conditions,” author Misa Nakaya says. The researchers performed tests to determine the optimal pH conditions and evaluated the relationship between fluorescence intensity and applied ethanol quantity. They also found that the biosensor’s fluorescence was not triggered when exposed to other volatile compounds, such as acetone or methanol, so specificity was maintained.

“Our dry-form biosensor for detecting chemicals in the air will have a much better chance at obtaining widespread commercial adoption because of its ease of fabrication,” says author Kohji Mitsubayashi. Having the capacity to produce solid biosensors quickly and cheaply may enable new point-of-care diagnostics and environmental monitoring systems for use in the field. 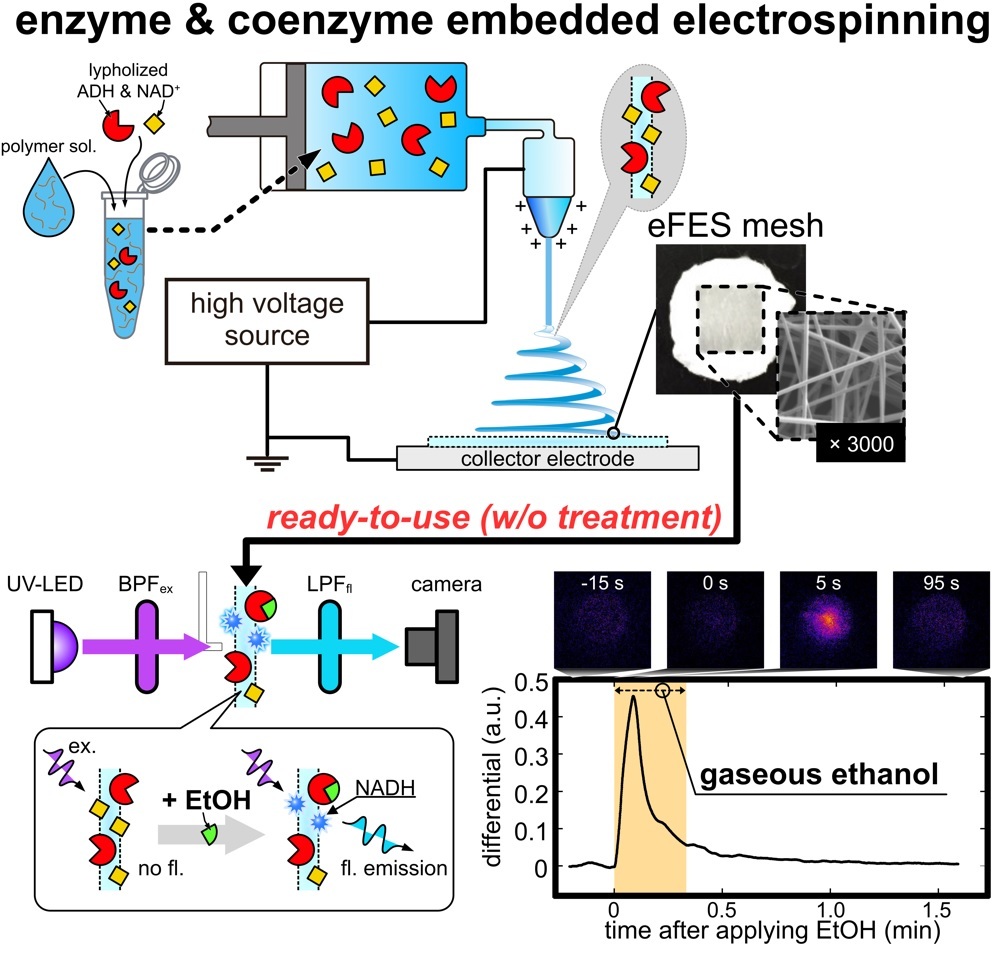 The electrospinning enzyme string was made with enzyme and coenzyme containing water-soluble polymer solution (top). The fabricated electrospinning fluorometric enzyme string (eFES) mesh was set on fluorescence imaging system without pretreatment (bottom-left). The images and numerical values of enzyme reaction rate when applying ethanol vapor to the eFES mesh (bottom-right). The picture is reused by permission of Elsevier.

The research is published in Biosensors and Bioelectronics as “Enzyme-embedded electrospun fiber sensor of hydrophilic polymer for fluorometric ethanol gas imaging in vapor phase” (DOI:10.1016/j.bios.2022.114453).

TDMU and Waseda University researchers embedded enzymes directly into polymer fibers to easily create biosensors for volatile compounds. They found that the fluorescence increased when exposed to target molecules, which can make point-of-care diagnostics and in situ environmental monitoring systems more widespread.