Move over muscles, it’s time for tendons to be in the spotlight

June 2, 2022
Researchers at Tokyo Medical and Dental University (TMDU),Scripps Research, and others found that tendons, not muscles, are the crucial site where increased expression of a mechanosensitive ion channels translates to better running and jumping capabilities
Tokyo, Japan—A gene (PIEZO1) for ion channels that govern cellular responses to mechanical stimuli may be a potential target for therapies for musculoskeletal disorders. Cells that are activated by mechanical stress (i.e., mechanosensitive) allow, for example, the sensation of touch at the fingertips. In bones, muscles, and tendons, mechanosensitive cells also play an important role—by initiating the production or breakdown of tissue in response to physical demands. New findings show that a significant biomechanical advantage is imparted by increased mechanosensitivity in tendons.

In a comprehensive study published this month in Science Translational Medicine, researchers at TMDU, Scripps Research, and others found that a genetic variant (R2482H Piezo1) in mice, which is analogous to one (E756del PIEZO1) in humans, produced cellular changes in tendons that translated to altered tissue properties and physical characteristics, which in turn translated to better athletic ability.

Both the human genetic variant and the mouse genetic variant were known to impart resistance to malaria (by altering the shape of red blood cells) and were associated with better tendon properties in mice and better jumping ability in humans. However, the link between genetic expression and physical performance was unclear.

The research team compared four groups of mice: wild-type mice (with no modifications to gene expression) and mice with tendon-specific, muscle-specific, or whole-body expression of the genetic variant. “Tendons were able to stretch more easily and store larger amounts of energy, which allowed for greater flexion and greater instantaneous power produced by the ankle, whether alterations were innate or introduced after mice matured,” explains senior author Hiroshi Asahara. “Muscle-specific alterations, however, did not result in improved physical performance.”

High expression of the calcium-ion channel mechanoreceptor coincided with high expression of two transcription factors, found only in tendon cells, that regulate genes for collagen and proteoglycan production.

Lead author Ryo Nakamichi explains, “Given these findings, we looked at tendon structure and composition more closely. Increased mechanosensitivity, from either tendon-specific or whole-body alterations, resulted in wider tendons composed of collagen fibrils with larger diameters.”

To put the findings from mice into human context, the research team replicated the effect of PIEZO1 activation on expression of the same two transcription factors in human tendon and, in addition, compared the frequency of the E756del PIEZO1 genetic variant in elite sprinters with that of nonathletes in Jamaica (because the variant occurs in a larger proportion in populations of African descent). The frequency of E756del PIEZO1 was significantly higher in the sprinters.

This finding that the specific variant of PIEZO1 gene can potentiate physical activity may eventually allow for new treatments for individuals with tendinopathy or other tendon-related disorders to be developed. 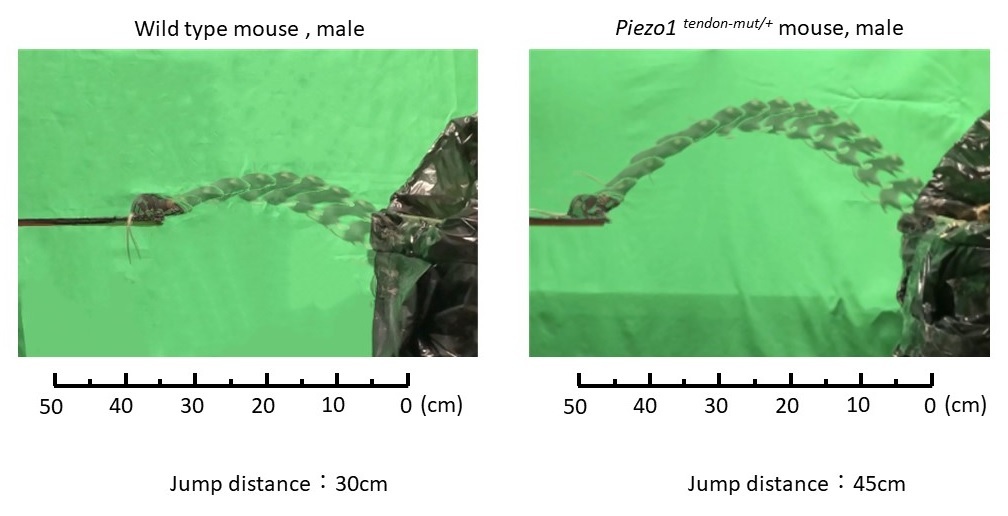 ###
The article, “The mechanosensitive ion channel PIEZO1 is expressed in tendons and regulates physical performance,” was published in Science Translational Medicine at DOI: 10.1126/scitranslmed.abj5557

Researchers at Tokyo Medical and Dental University (TMDU), Scripps Resarch, and others  found that a genetic variant in mice enhances the response of tendon cells to mechanical stimulation. This causes the development of wider tendons with compositions that allow for more elastic potential energy to be stored and more instantaneous power to be generated when running and jumping. These findings provide insight into the mechanisms of a similar genetic variant found in humans.