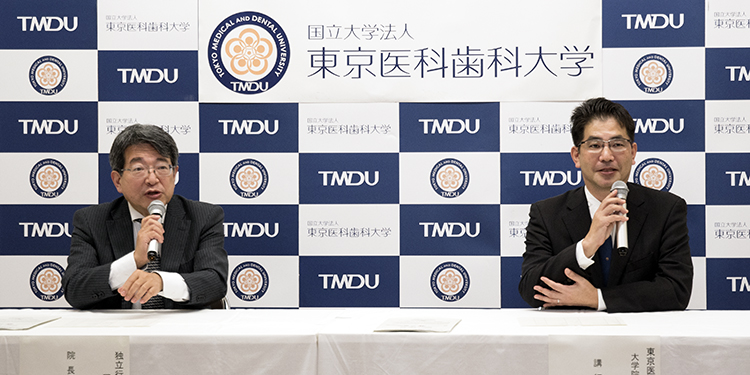 Tokyo, Japan – Recently there have been significant advances on several fronts in the ongoing war against cancer of the alimentary tract. Now, Japanese researchers report the development of another weapon: Linked Color Imaging (LCI), a novel endoscopic technique that improves detection of cancer by viewing the upper digestive tract mucosa under illumination that combines specific wavelengths of light to intensify subtle color variations indicative of neoplastic change. 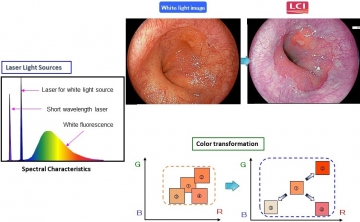 Principles of LCI
Left. The spectral characteristics of white fluorescence excited by a laser for white light and the short-wavelength laser. LCI expands and reduces color information simultaneously to intensify shades of red and white. Right. LCI enhances the contrast of red and white colors compared with a white light image.
Upper gastrointestinal (GI) endoscopy is routinely performed to detect tumorous changes or neoplasia in the pharynx, esophagus, and stomach and is conventionally done under White Light Imaging (WLI). Using the innovative LASEREO system developed by the Fujifilm Corporation, LCI technology balances white light with narrow-band short wavelength light in a specific ratio that deepens and enhances the contrast of red and white hues, thus intensifying nuances of mucosal transformation.

Though earlier studies have described the role of LCI in histological diagnosis of upper GI tract tumors, the research team felt the need for a large-scale, broad-based comparative study to assess its efficacy in neoplasm detection. “Our research was conducted in 19 hospitals across Japan involving 1502 patients with known past or current gastrointestinal cancer, representing a high-risk population” explains Dr Shoko Ono, lead author. “Patients underwent upper GI endoscopy under both WLI and LCI protocols wherein they were grouped according to which modality was performed first. Ingeniously, our study design ensured diagnostic accuracy; not only did each modality serve as a backup and crosscheck on the other, this was further followed by histopathological confirmation.” 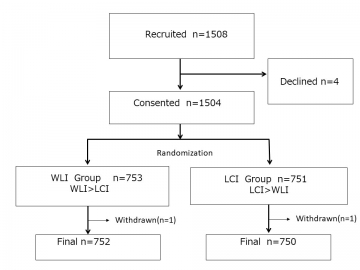 Trial profile
Among 1508 patients invited to participate in this study between November 2016 and July 2018, 1504 were enrolled after giving consent: 753 were assigned to the WLI group and 751 to the LCI group. Two patients, one in each group, were excluded because of a large amount of residue (WLI group) and stenosis caused by pharyngeal neoplasm (LCI group). In all 752 patients in the WLI group and 750 patients in the LCI group were included in the analyses
Dr Kenro Kawada, co-lead author, describes the results. “With LCI, lesions were detected in 8% of the patients but the detection rate was only 4.8% with WLI. Conversely, with WLI 3.5% of patients had a lesion overlooked but this rate was only 0.67% with LCI. This shows a clear superiority of LCI over conventionally illuminated endoscopic screening for discerning mucosal changes related to upper GIT neoplasia as it detected neoplasia 1.67 times more frequently.” 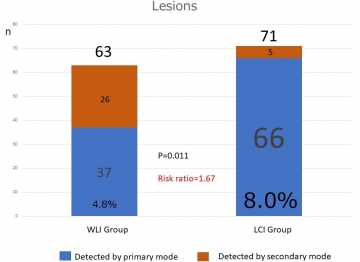 Patient-Based Results: Neoplastic Lesions Detected Using WLI and LCI in the primary and Secondary Modes
The percentage of patients diagnosed with a neoplastic lesion in the first examination by LCI (60 [66 lesions] of 750 patients or 8.0% [95% CI, 6.2% to 10.2%]) was higher than that by WLI (36 [37 lesions] of 752 patients or 4.8% [CI, 3.4% to 6.6%]) with a relative detection ratio of 1.67 (CI, 1.12 to 2.50; P = 0.011). The combined number of patients diagnosed with neoplastic lesions in the first and second examinations was 65 (71 lesions) in the LCI group and 60 (63 lesions) in the WLI group, with no difference between groups
Professor Mototsugu Kato, senior and corresponding author, explains the implications of their research. “Combined with previous studies that show the efficacy of LCI in detecting large intestinal neoplasia, our findings make a strong case for wider adoption of this modality in surveillance of the entire endoscopically accessible digestive tract. However, we need further research to confirm its efficacy in the hands of general clinicians for upper GI screening of an average population.”
###
The article, “Linked Color Imaging Focused on Imaging for Neoplasm Detection in Upper Gastrointestinal Tract (LCI-FIND): a randomized trial” was published in Annals of Internal Medicine. at DOI: 10.7326/M19-2561

Researchers from Tokyo Medical and Dental University (TMDU) report the use of Linked Color Imaging, an innovative modality that specifically combines selected wavelengths of light for illumination in upper gastrointestinal endoscopy. This method, by enhancing the subtle variations in red and white hues that indicate mucosal transformation, greatly improves the early detection of upper gastrointestinal tract neoplasms as compared with conventional white light illumination.