Taking Out the Trash is Essential for Brain Health

Taking Out the Trash is Essential for Brain Health

A research team at Tokyo Medical and Dental University (TMDU) find that Wipi3, a protein involved in cellular waste disposal, is crucial for neuronal health

Tokyo, Japan – A little mess never killed anyone, right? Wrong. Researchers at Tokyo Medical and Dental University (TMDU) have recently shown that a build-up of cellular “trash” in the brain can actually cause neurodegeneration, and even death.

Reporting their findings in Nature Communications, the researchers describe how defects in a cellular waste disposal mechanism, called “alternative autophagy”, can lead to a lethal build-up of iron and protein in brain cells.

“Cells are constantly clearing out dysfunctional or unnecessary components, which are then degraded and recycled,” explains study lead author Hirofumi Yamaguchi. “Autophagy is the process whereby unwanted cellular components and proteins are contained within a spherical doubled-membraned vesicle called an autophagosome, which fuses with an enzyme-filled lysosome to form an autolysosome. The waste material is then broken down and reused by the cell.”

Mice containing a brain-specific deletion of Wipi3 demonstrated growth and motor defects most commonly seen in patients with neurodegeneration, with the researchers also noting an accumulation of iron and the iron-metabolizing protein ceruloplasmin in the brain cells of affected mice.

“Iron deposition has been flagged as a possible trigger in various neurodegenerative disorders, and is usually associated with the abnormal accumulation of iron-binding proteins,” explains study senior author Shigeomi Shimizu. “Our findings are strong evidence that alternative autophagy, and Wipi3 specifically, may be essential for preventing this toxic build-up of iron.” 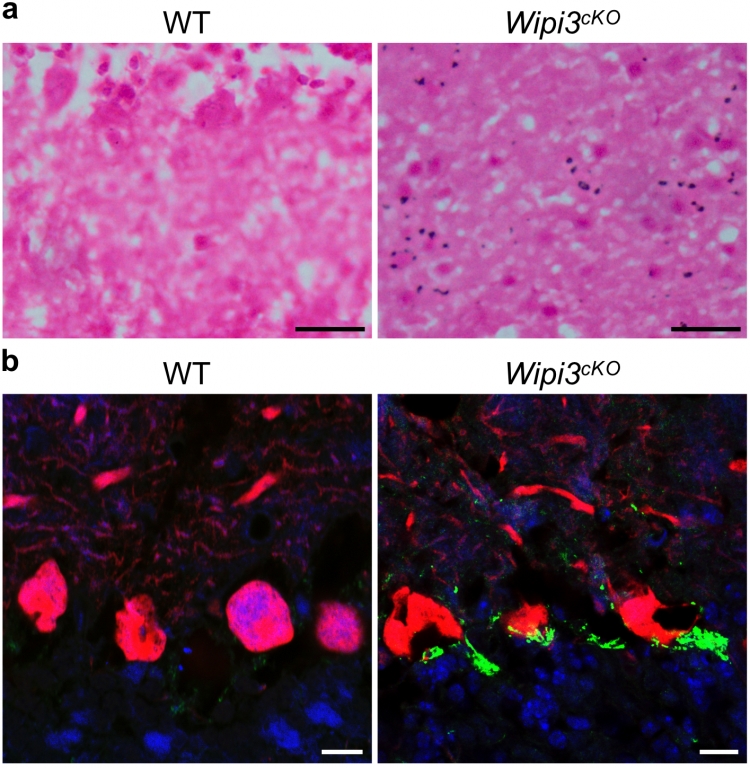 Accumulation of iron and ceruloplasmin in neuron-specific Wipi3cKO mice
Cryosections of the cerebellum from Wipi3cKO mice and WT mice were stained with Prussian blue (a) and were immunostained with anti-ceruloplasmin (green) and anti-calbindin (red) antibodies (b). Blue puncta indicate iron deposition in (a). 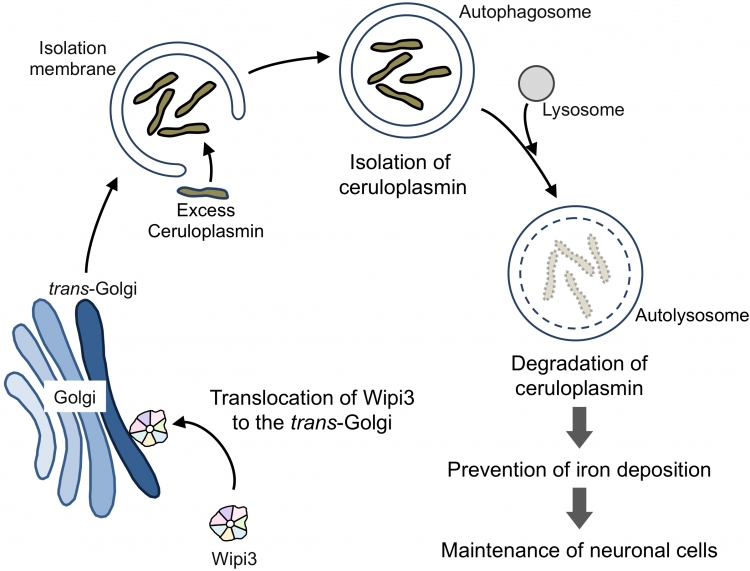 The researchers are hopeful that this research could lead to the development of neuroprotective drugs. Preliminary tests indicate that over-expression of Dram1, another alternative autophagy-associated protein, can reverse the effects of Wipi3 deletion, and may form the basis of future therapies for various neurodegenerative diseases. The article, “Wipi3 is essential for alternative autophagy and its loss causes neurodegeneration,” was published in Nature Communications (DOI: 10.1038/s41467-020-18892-w).

Researchers at Tokyo Medical and Dental University (TMDU) have identified a protein called Wipi3 that is essential for cellular waste disposal via the alternative autophagy system. Deletion of Wipi3 in the brains of mice causes growth and motor defects attributed to neuronal accumulation of iron, resulting in neurodegeneration. However, over-expression of another alternative autophagy protein, Dram1, reverses the effects in Wipi3 deficiency, and may represent a novel treatment for neurodegenerative diseases.