Researchers from Tokyo Medical and Dental University (TMDU) identify the protein APRIL as a cause for antibody deficiency in humans, and as a key regulator of plasmacyte maintenance and immunoglobulin production. 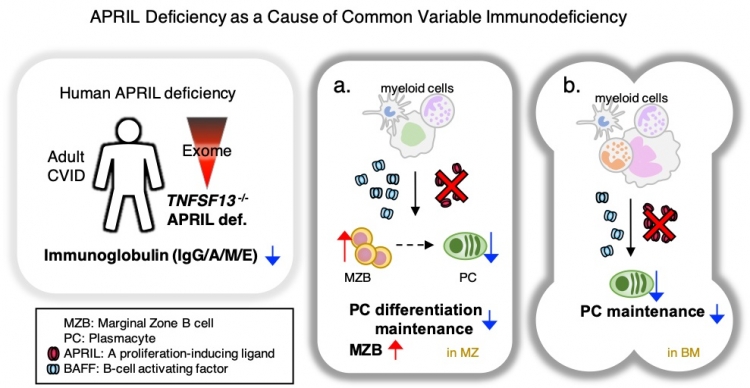 The first APRIL deficiency was found in an adult common variable immunodeficiency patient. We performed whole exome sequencing in the patient and found the homozygous deletion mutation in TNFSF13. Based on the findings in the APRIL-deficient patient, APRIL is critical for life-long maintenance of plasmacytes to produce immunoglobulins in humans. We assumed that the functional defect in B cells due to APRIL deficiency occurs at a) plasmacyte differentiation from memory/MZ B cells, and b) life-long maintenance in the bone marrow.

Tokyo, Japan – The immune system depends on a complex interaction between various cells for proper functioning. In a new study, researchers from Tokyo Medical and Dental University (TMDU) discovered that an absence of the protein APRIL in humans results in the underdevelopment of antibody-producing plasmacytes causing common variable immunodeficiency (CVID), a condition which is characterized by increased susceptibility to infections of affected patients.

Plasmacytes, whose lifelong task is to keep producing immunoglobulins, are a key component of the immune system. They develop when B cells, a type of immune cell, are activated by T cells and other blood cells, called myeloid cells, and switch from producing low-quality to high-quality antibodies. Because each plasmacyte produces one specific antibody, their development is closely regulated and thus depends on a complex interaction between B cells and myeloid cells. A protein that is part of this process is APRIL (A PRoliferation-Inducing Ligand), which is produced by myeloid cells to induce the development of plasmacytes from B cells. Could defects in APRIL result in immunodeficiency in humans? Until now this was unknown.

“There are countless components within the complex immune system machinery,” says corresponding author Kohsuke Imai. “Disrupting one of them can severely decrease the immune system’s ability to fight infections. The goal of our study was to understand how a deficiency of APRIL affects the human immune system.”

“These findings suggest that a deficiency of APRIL disrupts the development of immunoglobulin-producing plasmacytes,” says lead author Tzu-Wen Yeh. “Our next goal was to determine if APRIL not only correlates with, but also causes immunodeficiency.”

“These are striking results that show how APRIL has an essential function in the proper functioning of the immune system,” says Kohsuke Imai. “Our findings provide new insights into plasmacyte maintenance and immunoglobulin production. To our knowledge, our study provides the first report to show that deficiency in APRIL is linked to common variable immunodeficiency in humans. Substitution of recombinant APRIL in congenital or acquired APRIL deficiency might even be a potential novel treatment for the immunodeficiency due to hypogammaglobulinemia.”

The article, “APRIL-dependent lifelong plasmacyte maintenance and immunoglobulin production in humans,” was published in The Journal of Allergy and Clinical Immunology at DOI: 10.1016/j.jaci.2020.03.025

Researchers from Tokyo Medical and Dental University (TMDU) identified the protein APRIL as a key regulator of plasmacyte maintenance and immunoglobulin production in humans. They showed in a patient with common variable immunodeficiency and a mutation in the gene encoding APRIL that a lack of APRIL reduces levels of plasmacytes and immunoglobulins. These findings help us understand how APRIL regulates the immune system and suggest the novel treatment by recombinant APRIL for immunodeficient conditions.