Getting You Moving Again: A Possible New Treatment for Joint Issues

Tokyo, Japan – Osteoarthritis (OA) is a debilitating joint disease that affects millions of individuals worldwide. Common in the older adult population, OA is associated with loss of cartilage over time. Because joint replacement and treatment of symptoms are the only current options, efforts have been made to identify mechanisms governing OA to find new therapeutic methods. In a recent study published in Nature Communications, a team led by researchers at Tokyo Medical and Dental University (TMDU) identified a small regulatory RNA molecule known as a microRNA (miRNA or miR) that participates in the balance between cartilage production and degeneration. They examined the miR-455 parent molecule that is an unusual one in that it creates two different strands of functional miRNA, 5p and 3p.

Individual miRNAs target a repertoire of genes that contain their specific binding sequence in the gene message. Because of this, they can regulate numerous genes simultaneously. When binding to a gene message, the miRNA can block it from being converted into protein or cause the message to be degraded entirely. A previous study has shown that deleting the miR-455-3p strand in mice causes degeneration of the mouse knee cartilage but the details, and the effect of the 5p strand, remained unclear.

“miR-455 clearly plays a significant role in cartilage regulation, but we do not fully understand the mechanism controlling it,” says lead author of the study Yoshiaki Ito. “Our interest in the topic was aroused by this lack of information and reinforced by the exceptionality of miR-455 in generating two distinct strands of miRNA that both have biological effects.”

The researchers examined miR-455 levels in human cartilage samples and found that individuals with OA had significantly lower amounts of this miRNA. They then generated miR-455 knockout mice and confirmed OA-like cartilage degeneration in the knee joints once the mice were six months old.

“We became interested in which specific genes were overexpressed in these mice because of the absence of miR-455-mediated regulation,” states Hiroshi Asahara, senior author. “We performed a detailed genetic screening and found that the gene message for a protein called hypoxia-inducible factor-2α (HIF-2α) was amongst the targets of miR-455.”

HIF-2α is a protein that is involved in the breakdown of cartilage. Therefore, the team injected synthetic versions of miR-455-3p and 5p into OA-model mice knee joints and identified inhibited degeneration of the cartilage. HIF-2α expression also significantly decreased following miR-455 treatment.

“Our findings not only help us better understand the biology of cartilage regulation and OA pathogenesis, but also show that miR-455 has the potential to be developed into a novel therapeutic method for treating OA,” explains Ito.

Considerable research is ongoing to utilize miRNAs as targeted therapies for a wide variety of diseases. This study provides strong support for using both strands of miR-455 in such a manner for OA. 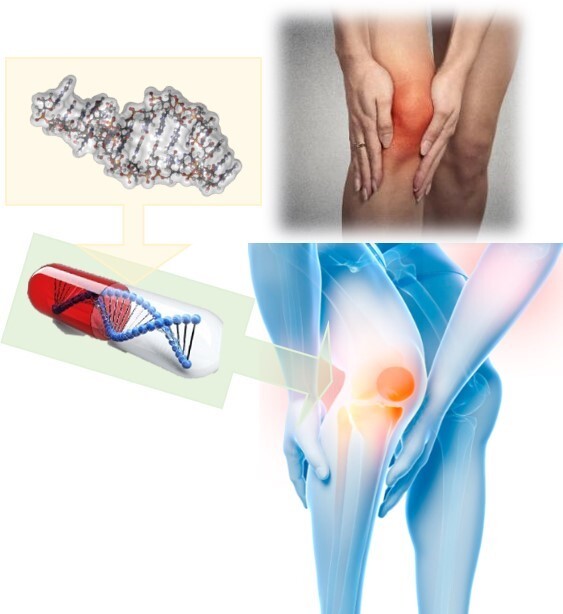 Treatment of osteoarthritis by miRNA introduction
＃＃＃
The article, “Both microRNA-455-5p and -3p repress hypoxia-inducible factor-2α expression and coordinately regulate cartilage homeostasis,” was published in Nature Communications at DOI: 10.1038/s41467-021-24460-7