Blue Is The Clue To Evaluating Diabetic Retinopathy

Researchers from Tokyo Medical and Dental University (TMDU) demonstrate a thorough and non-invasive imaging technique to identify areas of the eye affected by diabetic retinopathy, a progressive eye disease associated with diabetes

Tokyo, Japan – Just as bright light can illuminate the depths of a darkened room, researchers in Japan have found that blue light can be used to probe the depths of the eye and uncover areas affected by diabetic retinopathy (DR), a leading cause of blindness.

In a new study published in Asia Pacific Journal of Ophthalmology, researchers from Tokyo Medical and Dental University (TMDU) have revealed that blue images obtained by multicolor widefield scanning laser ophthalmoscopy (SLO) may be used to identify areas of DR-induced damage in a more extensive portion of the eye compared with previous methods.

Current eye imaging methods include fluorescein angiogram, which involves the injection of dye into the eye. SLO is a non-invasive approach that does not require dye, and multicolor widefield SLO represents an advancement of this technique in which red, blue, and green lasers are used to simultaneously capture images of a wide portion of the eye. Previous research has shown that blue images captured by conventional SLO may reveal hyporeflective areas in the eye indicative of damage associated with DR. Researchers at TMDU sought to further evaluate this finding using widefield SLO.

In this retrospective study, the researchers compared blue widefield SLO images and fluorescein angiogram images taken in people with diabetes. The morphology of the retina was also evaluated in some individuals with DR.

“We found that the hyporeflective areas in the blue widefield SLO images appeared to correspond with areas of ischemia in the fluorescein angiogram images of patients with DR,” explains Kyoko Ohno-Matsui, senior author. “We were pleased to find that the rate of concordance was high.”

Further evaluation of patient images showed that ischemic areas (i.e., areas of reduced blood flow) appeared to correspond with parts of the retina that were thin and partially disorganized.

“It’s possible that the blue wavelength of light can pass more easily through these thinned areas of the retina, which presents as hyporeflective areas in the SLO images,” says Horie.

This study confirms the utility of blue widefield SLO as a simple and non-invasive tool for the detection of DR-associated damage in the eye. This technique may serve as an important means of screening and monitoring disease progression in individuals with DR. 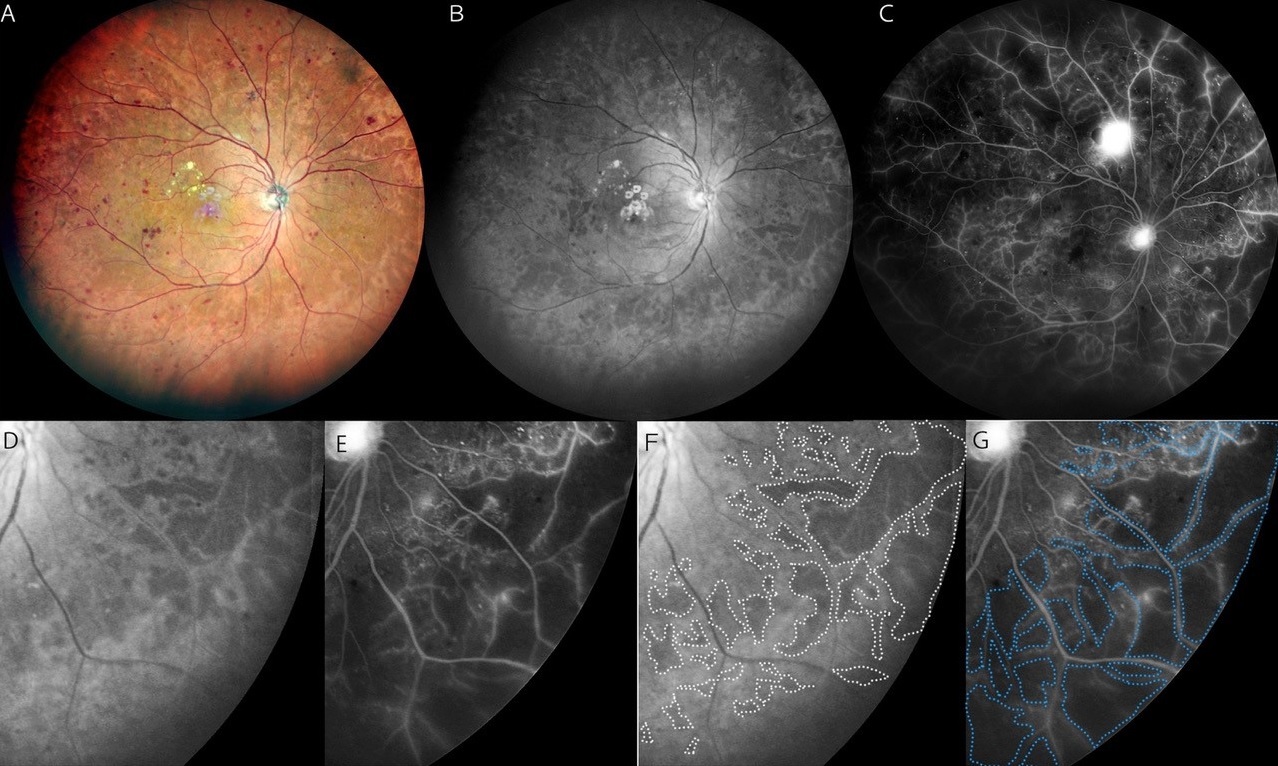 Concordance of hyporeflective areas in the blue widefield scanning laser ophthalmoscope images and non perfused areas in fluorescein angiography image in proliferative DR (PDR)
A: Multicolor widefield SLO image of the right fundus of a 65-year-old man with PDR showing multiple hemorrhages in a wide area of the fundus. B: Blue SLO image shows a hyporeflective area in the mid-periphery to periphery of the fundus. C: Widefield FA image shows widespread NPAs in the mid-periphery to periphery. Neovascularization is also seen in the superior pole of the eye. D: Magnified image of image B shows hyporeflective areas in the lower temporal quadrant. E: Magnified FA image of image C shows NPAs in the same quadrant of image D. F: The hyporeflective areas in image D are outlined by white dots. G: The NPAs in image E are outlined by blue dots. The outline of white dots in image F is located inside the outline of blue dots image G.
(Horie S, Ohno-Matsui K et al. Asia Pac J Ophthalmol (Phila). 2021 Aug 27; 10(5):478-485)
###
The article, “Blue widefield images of scanning laser ophthalmoscope can detect retinal ischemic areas in eyes with diabetic retinopathy,” was published in Asia Pacific Journal of Ophthalmology at DOI: 10.1097/APO.0000000000000432

In a retrospective imaging study, researchers from Tokyo Medical and Dental University (TMDU) have found that blue widefield scanning laser ophthalmoscopy may be used to identify areas of damage in eyes with diabetic retinopathy. Images captured with this technique corresponded with areas of ischemia identified by fluorescein angiogram, which is a more invasive technique. Blue widefield scanning laser ophthalmoscopy is non-invasive and offers the advantage of capturing a larger portion of the eye than previous techniques.