Tokyo, Japan – Hematopoiesis can be affected by biological stresses, such as infection, inflammation and certain medications. In a new study, researchers from Tokyo Medical and Dental University (TMDU) identified a novel cell surface marker that enables the accurate analysis of hematopoietic responses to biological stress.

“Accurate analysis of hematopoiesis is crucial to our understanding of the pathogenesis of various diseases,” says corresponding author of the study Toshiaki Ohteki. “The goal of our study was to identify an alternative, stable marker that can be reliably used to study hematopoietic responses to stress situations.”

To achieve their goal, Masashi Kanayama, a main contributor of this project, injected a bacterial toxin into mice to induce systemic bacterial infection and detected an increase of Sca-1-positive hematopoietic progenitor cells, suggesting that Sca-1-negative cells started expressing the protein as a response to infection. To identify a superior marker to Sca-1, he screened 180 cell surface proteins and identified the protein CD86 as a novel candidate marker. In contrast to Sca-1, CD86 expression did not increase significantly upon systemic bacterial infection (Figure 1), confirming its potential to distinguish early and late hematopoietic progenitor cells under stress conditions.

But could CD86 help understand how biological stress affects hematopoietic responses? To investigate this, the researchers focused on erythropoiesis, the production of red blood cells, in mice injected with the bacterial toxin. CD86-based analysis identified an early activation phase of erythropoiesis in the bone marrow within 18-24 hours after toxin injection, while Sca-1-based analysis did not. Further analysis showed that the number of red blood cells in the bone marrow peaked at 18 hours to then decreased to basal levels by 72 hours. Conversely, the number of red blood cells in the blood began to increase by 24 hours. Intriguingly, the researchers found that the newly produced cells had the morphological characteristics of mature red blood cells, that is, a smaller cell size and the absence of a nucleus, confirming that the cells were not red blood cell precursors.

“These are striking results that show how CD86 can rectify the shortcomings of Sca-1 in the analysis of hematopoiesis,” says Ohteki. “Our findings provide new insights into the use of CD86 as an alternative marker to Sca-1 for assessing bona fide hematopoietic responses under stress conditions.” 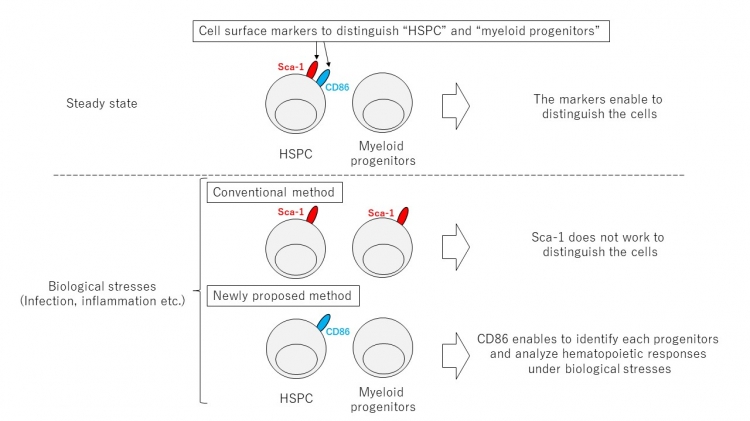