February 24, 2022
Researchers from Tokyo Medical and Dental University (TMDU) find that different parts of simian immunodeficiency virus viral protein U are needed to interact with the same host protein in monkeys versus humans
Tokyo, Japan - In the epic battle between hosts and viruses, viruses are constantly evolving to be more infectious. Now, researchers from Japan have found that human genes also evolve to help protect our bodies from invasion by life-threatening viruses.

In a study published in December in Journal of Virology, researchers from Tokyo Medical and Dental University (TMDU) have revealed that a monkey variant of human immunodeficiency virus (HIV) can counteract a human protein that defends against viral infection in a different way than it counteracts the same protein in monkeys.

Simian immunodeficiency virus (SIV) is closely related to HIV, and both viruses tend to use similar strategies to escape their hosts’ defenses, which also tend to be very similar. One of these defenses is a protein called tetherin (also known as BST-2 or CD317). If a cell is invaded by the virus, tetherin prevents the virus from leaving the cell and infecting other nearby cells. To counter this measure, HIV and SIV make a protein called viral protein U (Vpu) that attaches to tetherin and blocks its effects.

“Because viruses adapt to their hosts, HIV Vpu is most effective against human tetherin, while SIV Vpu is most effective against monkey tetherin,” explains Dr. Takeshi Yoshida, senior author of the study. “But in at least one unusual case, a strain of SIV that typically infects the greater spot-nosed monkey can also overcome human defenses, which suggests that SIV potentially infects humans.”

To explore how SIV Vpu affects human tetherin, the researchers mutated different parts of the protein and looked at how well it blocked tetherin’s normal activities and effects.

The researchers pinpointed seven specific amino acids (the basic building blocks of proteins) that are needed for SIV to block human tetherin. Importantly, these seven amino acids were not essential for the virus to block monkey tetherin.

“What this tells us is that SIV Vpu may use a totally distinct mechanisms to counteract the effects of monkey and human tetherin,” says Yoshida.

Given the different approaches that this viral protein uses to neutralize monkey and human tetherin, it seems likely that the gene encoding human tetherin faced different pressures over the course of evolution than the gene encoding monkey tetherin. The results from this study could help us better understand the evolution of host genes as a result of host-pathogen interactions.

Fig 1. Antagonism of a human anti-viral protein by a virus isolated from a wild monkey 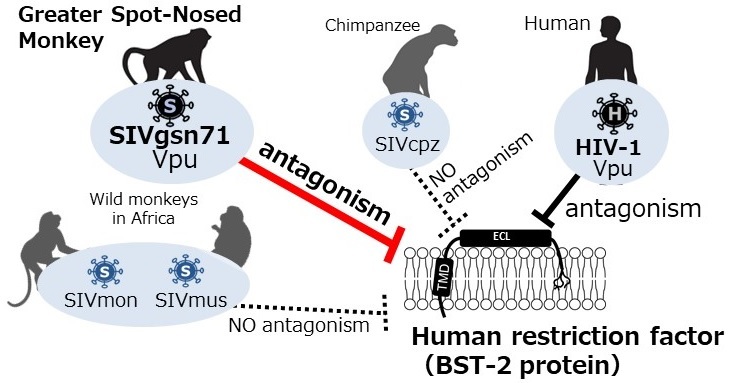 Caption: Vpu from the SIV employs different amino acids to antagonize human and monkey BST2. It suggests that the virus has acquired an ability potentially facilitating zoonosis apart from an ability to overcome a restriction factor of its own host.

Researchers from Tokyo Medical and Dental University (TMDU) have found that different parts of viral protein U expressed by simian immunodeficiency virus are required to bind to and block tetherin, an antiviral protein, in monkey cells versus in human cells. This suggests that the virus uses two different mechanistic strategies to evade this host defense and sheds new light on host-pathogen coevolution.