Integrating Data to Find a Cure

Tokyo, Japan – Abnormal gene expression is ultimately what fuels cancer. Certain expression profiles or signatures can help physicians diagnose an individual with a specific type of cancer. However, gene expression analysis can also be used to identify new targets for anti-cancer therapeutics.

In a recent study published in Cancer Science, a team led by researchers at Tokyo Medical and Dental University (TMDU) performed several analyses on esophageal squamous cell carcinoma (ESCC) tumors from Japanese patients. They identified specific variations and alterations in genes commonly found in ESCC patients. Identifying the genes that promote the development and progression of ESCC is one step towards improving our understanding of how to treat this disease.

ESCC is the predominant form of esophageal cancer in Asia and remains a deadly disease in need of innovative treatment methods. An effective targeted therapy for ESCC has yet to be developed. Previous studies have identified specific genetic variants associated with ESCC. Scientists have also examined DNA methylation patterns, which are a form of epigenetic modification. When certain regions of a DNA molecule become methylated, gene expression levels can change. Yet these patterns have mostly been used as biomarkers to identify ESCC subtypes. Because of this, the TMDU group aimed to integrate epigenetic data with DNA sequencing and gene expression trends to better understand ESCC.

The analysis suggested that many ESCC tumors displayed variants of certain cancer-related genes, such as members of the NOTCH family and the tumor suppressor gene TP53. A variant of TP53 was detected in 84% of the tumor samples. Additionally, some of these genes showed copy number amplification.

“We also examined cancer-related genes that display allelic expression imbalances (AEIs), meaning one allele is predominantly expressed,” states Johji Inazawa, senior author. The team discovered that many ESCC patients had AEI in gene members of the FAT family. Some cases had highly expressed alleles with variants, which could support tumor growth. “Humans have two alleles for each gene, one inherited from their mother and another from their father. AEIs can affect the expression balance between these alleles.” 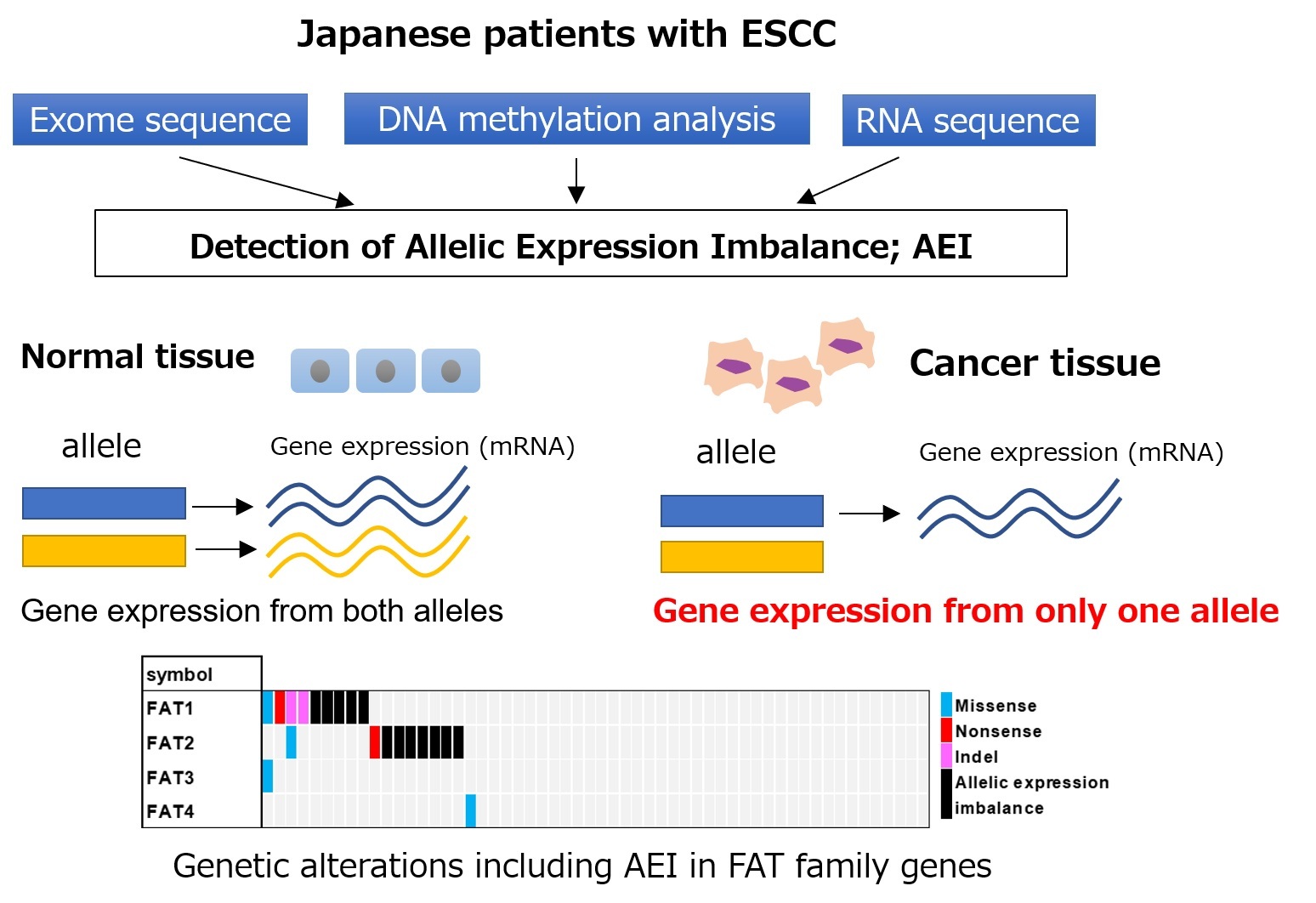 Figure. AEI occurring in ESCC
In previous studies, several cancer related genes were found to be involved in AEIs, which expressed predominantly only one allele of two.
Our integrated analyses revealed genome-wide profiles of AEIs in ESCCs.
In addition, approximately 30% of ESCC cases with nonsynonymous SNVs or AEI in FAT1 and FAT2 genes, which are well-known to be mutated in cancer, tended to be detected in a mutually exclusive manner.

The intriguing results generated by this team provide a more comprehensive view of ESCC tumors. This work will be key for discovering new targets and developing effective therapies for this deadly disease.
###
The article, “Integrative genome-wide analyses reveal the transcriptional aberrations in Japanese esophageal squamous cell carcinoma,” was published in Cancer Science at DOI: 10.1111/cas.15063.