Tokyo – Graves’ disease is an autoimmune disorder that leads to overproduction of thyroid hormone. This most common form of hyperthyroidism can cause anxiety, tremors, rapid heartbeat, and, in some patients, a bulging appearance in the eyes. Patients are typically given an anti-thyroid drug for 12–18 months to bring their hormone levels back to normal, but many relapse and experience a hormonal uptick after stopping treatment. Currently, there is no biomarker—a reliable and measurable indicator of disease—that can identify risk of relapse in these patients.

Researchers have now found a gene whose expression is significantly higher in relapsing patients. The gene, SIGLEC1, has the potential to become the first biomarker to predict relapse in Graves’ disease.

In a multicenter study centered at Tokyo Medical and Dental University (TMDU) and recently reported in the journal Thyroid, researchers examined over 400 patients with Graves’ disease, with the hope of finding a marker to predict relapse. At first, however, the investigation began with just two patients.

“We started by looking at differences in gene expression between two patients: one who was in long-term remission and one who suffered from frequent relapses after stopping treatment,” lead author Koshi Hashimoto explains. “We found the relapsing patient exhibited much higher expression of SIGLEC1, a gene known to be involved in autoimmune disorders and possibly in thyroid gland proliferation.”

By initially focusing on only two patients, the researchers were able to conduct a thorough search for potential biomarkers, in this case focusing on gene expression. They used a microarray, which is a chip containing short sequences of DNA that act as microscopic probes, to compare the expression of thousands of genes between the two individuals. SIGLEC1expression was markedly higher in immune cells of the relapsing patient, identifying the gene as a prime biomarker candidate.

Armed with this presumed marker, the research team conducted a cross-sectional study of patients with Graves’ disease who were treated between 2008 and 2015. Compared with those in remission, patients who had previously relapsed showed elevated SIGLEC1 expression at the time of the study (Fig.A). These data allowed the team to group patients as either positive or negative for SIGLEC1—creating a diagnostic cutoff that could theoretically be used to predict future relapse. 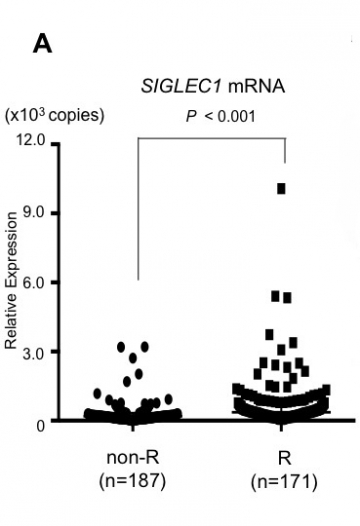 To test the diagnostic utility of this cutoff, the researchers measured SIGLEC1 in a second group of patients after they had just discontinued anti-thyroid treatment. They then followed up on these patients to see whether they would eventually experience a relapse. The results were notable: patients who were SIGLEC1-positive at the time they stopped treatment were 7.5 times likelier to undergo a relapse than SIGLEC1-negative patients (Fig.B). 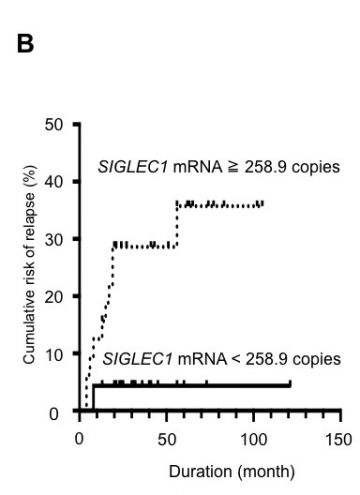 The study suggests the likelihood of relapse in Graves’ disease may someday be predicted using a simple binary test for SIGLEC1. This simplicity may help physicians to identify potential relapse cases at the outset of treatment.

“The risk of relapse in Graves’ disease is quite high—around 40%–50% in Europe, and 70%–80% in the United States,” co-author Masanobu Yamada notes. “Our finding may give us a tool to find at-risk patients at an earlier stage, and more effectively tailor their treatment options.”

The article, “Sialic acid-binding immunoglobulin-like lectin1 as a Novel Predictive Biomarker for Relapse in Graves' Disease -A multicenter study-” was published in Thyroid at DOI: 10.1089/thy.2017.0244.

Patients with Graves’ disease often experience relapse after discontinuing treatment. However, no reliable method exists for identifying patients at risk of relapse. A multicenter team of researchers in Tokyo identified the SIGLEC1 gene as a potential biomarker for relapsing GD. Patients categorized as SIGLEC1-positive were found to be substantially more likely to suffer a relapse compared with SIGLEC1-negative patients. SIGLEC1 may serve as a biomarker for relapse in GD.