Tokyo, Japan – Signaling pathways involving JNK proteins and their activators MKK7 and MMK4 control several biological processes in response to environmental stimuli, growth factors, and hormones. Previous work has identified particular roles for these pathways in the development of the nervous system, but their effect on the nervous systems of mature animals was unknown. Cell culture studies that inhibited JNK or MKK7 expression increased the lengths of the molecular cycle of gene expression, so-called circadian transcription. However, the function of MKK7–JNK signaling on circadian rhythms in whole animals had not been investigated.

An international partnership between Tokyo Medical and Dental University (TMDU) scientists and colleagues from California, Austria, and other parts of Japan found that MKK7–JNK signaling is essential for control of the mouse circadian clock and the maintenance of nerve function and movement in adult animals.

Because MMK7 and MKK4 regulate all three forms of JNK proteins, removal of either MMK7 or MKK4 expression or that of both proteins can be used to study JNK function. The researchers bred mice in which MKK7 expression was specifically knocked out in nerve cells (neurons) but not the glial cells surrounding and supporting the neurons.

The MMK7 knock-out (KO) mice had greatly enlarged brains compared with control animals because of a larger area of white matter and more junctions between the nerve cells. They also had differences in their behavioral rhythms. “We compared KO mice kept in light–dark conditions to mimic day and night with those kept in constant darkness,” co-author Tokiwa Yamasaki says. “Mice kept in the dark tended to have longer behavioral rhythms which were controlled by their internal circadian clock, while those in light–dark conditions showed typical 24-hour patterns that were regulated by the light.” KO mice were also less active than controls.

Progressive reductions in movement were observed in KO mice. Co-author Norie Deki-Arima says, “That began as reduced reflexes in 8-month-old mice and developed into an unusual gait and hind limb paralysis at 20 months of age.” This was shown to be caused by the degeneration of muscle in the lower leg and a breakdown of nerve cell projections (axons). 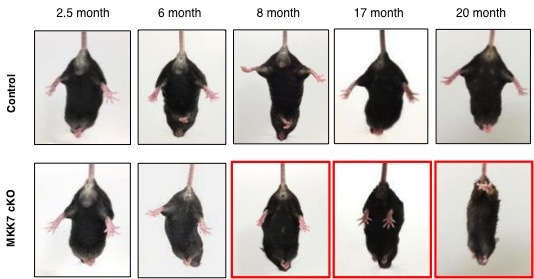 “To understand why loss of movement occurred in KO mice at the molecular level, we examined their brains and spinal cords,” corresponding author Hiroshi Nishina says. “We noticed increased levels of proteins that transport molecules through axons in KO mice, which may interfere with neural function.”
These changes in circadian rhythms and behavioral activity are also seen in some human psychiatric diseases, suggesting that restoring normal MKK7–JNK signaling could help treat such disorders.
The article “Age-dependent motor dysfunction due to neuron-specific disruption of stress-activated protein kinase MKK7” will be published shortly.

An international Tokyo Medical and Dental University (TMDU) collaboration identified a role for the MKK7–JNK protein signaling pathway in maintaining the adult mouse nervous system and movement. Mice lacking the JNK activator MKK7 had elongated behavioral rhythms in the absence of light control, and showed progressive muscle weakness. These findings help understand the control of the adult nervous system and could aid the treatment of psychiatric disorders showing similar symptoms to MKK7 knock-out mice.