Tokyo –The intestine encounters more foreign substances, and potential toxins, than other parts of the body, so it is not surprising that a healthy gut is maintained by the tight control of immune responses. These protect against harmful pathogens but tolerate harmless bacteria. However, an inappropriate immune response can lead to chronic inflammation and the development of inflammatory bowel disease (IBD).

Macrophages are white blood cells that engulf pathogens and scavenge dying cells. They differentiate from another type of white blood cell, monocytes, and together these cells contribute to IBD pathology in the colon. However, the mechanisms underlying this differentiation, and how macrophages acquire properties to induce inflammation of the colon were unclear.

A team of Japanese researchers led by Tokyo Medical and Dental University (TMDU) used a chemically induced mouse model of IBD to show that a protein signaling pathway is crucial to the generation of macrophages that cause colonic inflammation. The signaling pathway enhances access to the promoters of genes encoding inflammatory mediators, thus increasing their expression. The study results were recently published in Mucosal Immunology.

Inflammatory monocytes and macrophages in the colons of IBD mice showed increased expression of proteins that promote inflammatory responses compared with other cell populations. They also expressed more Stat1, which is a transcription factor that upregulates gene expression in response to stimulation by IFNγ, a signaling molecule released in the presence of pathogens.

As well as contributing to the differentiation of inflammatory monocytes into macrophages capable of inducing colonic inflammation, the team also found that IFNγ signaling was required to maintain this macrophage population in the inflamed colon.

“We already knew that the response to pathogenic bacteria in the gut involves remodeling of the DNA–protein package known as chromatin, enabling access for the expression of genes involved in inflammation,” corresponding author Toshiaki Ohteki says. “This led us to investigate the role of IFNγ in a similar context, and we found that IFNγ loosened the chromatin structure around the promoters of two genes encoding inflammatory mediators, leading to an increase in their expression.” 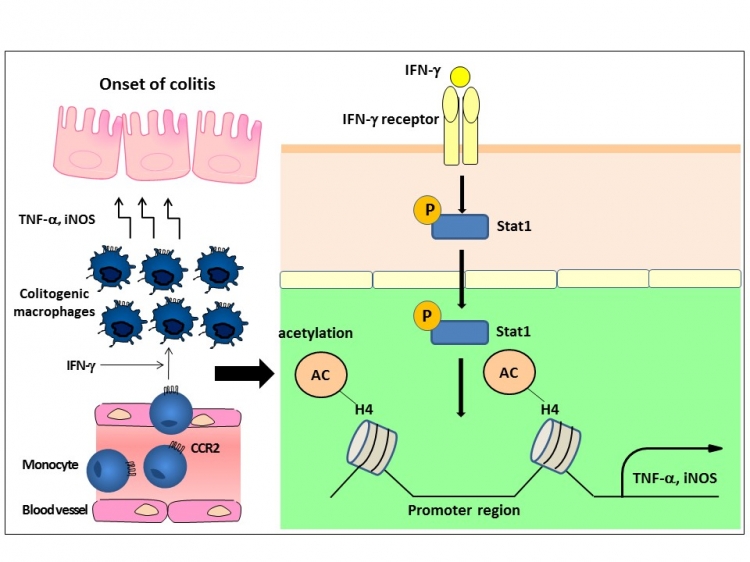 This new understanding of how dysregulated macrophages develop in the colon during inflammation may lead to the identification of novel targets for IBD therapy.

Inflammatory bowel disease (IBD) develops because of an uncontrolled immune response in the colon. Japanese research led by Tokyo Medical and Dental University (TMDU) showed that a signaling pathway underlies the differentiation of white blood cells into a population capable of inducing inflammation. This signaling pathway also enhanced the expression of genes encoding inflammatory mediators, opening up the possibility of developing drugs to target these mechanisms in IBD therapy.