Nothing but the Truth in the Fight Against Cancer

Nothing but the Truth in the Fight Against Cancer

Tokyo, Japan – The development and progression of cancer is a complicated process that occurs when cells in the body grow out of control. Many different mechanisms and pathways that directly affect cell proliferation have been uncovered. Researchers from Tokyo Medical and Dental University (TMDU) have made an additional discovery; a unique anti-cancer function for an enzyme previously believed to only influence RNA molecule structure.

In a report published in The EMBO Journal, a group of researchers from TMDU detail the identification of the protein TruB1 as a regulator of the microRNA (miRNA) let-7, which has significant implications for the fight against various cancers.

MiRNAs are small RNA molecules that serve as a sort of molecular brakes. They work by blocking certain gene expression messages from being formed into proteins. Let-7 was one of the first of over 1,500 miRNAs to be discovered and is present in the cells of many species, including humans. Previous work has shown that many tumor cells have fewer let-7 molecules than normal cells, and therefore this miRNA may be important in cancer development. Because of this, the researchers at TMDU were curious if there were any cellular proteins that could help increase the amount of let-7 present in cells.

“Let-7 is a very important miRNA in human cells that can affect many processes from development to tumor suppression,” says lead author of the study Ryota Kurimoto. “However, it is still unclear how levels of let-7 in cells are controlled, so we wanted to investigate this further.”

To do this, the researchers performed a cell-based screening of proteins that can bind to RNA molecules. They did this with a system called a luciferase assay, which helped them identify proteins that could assist with increasing let-7 levels.

“Our main finding was quite unexpected,” describes Hiroshi Asahara, senior author. “The protein TruB1 significantly promoted maturation of let-7 in our experiments.”

The results were mainly surprising because TruB1 had previously only been characterized as a protein that participates in a process called RNA modification.

“When binding to let-7, TruB1 didn’t perform the modification it had always been known for,” says Kurimoto. “In fact, TruB1 helped other proteins bind to let-7, which enhanced expression levels of this miRNA.”

Additionally, through regulation of let-7, TruB1 could suppress growth and division of cells. This is quite significant because it implies that TruB1 has an anti-cancer role in cells. This study provides crucial information that will be critical for the development of novel cancer therapeutics. 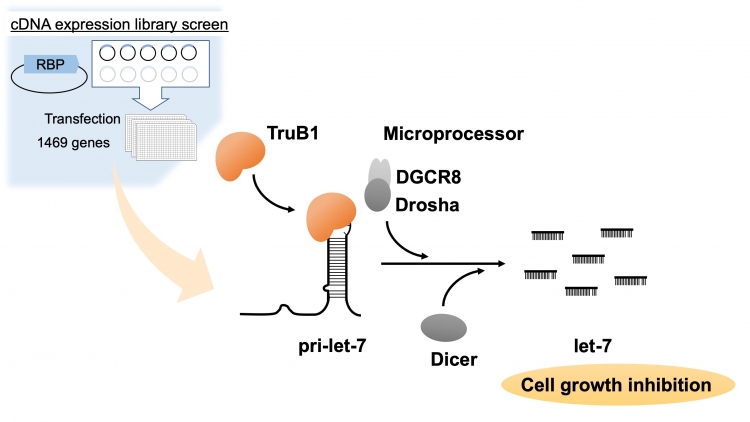 Researchers from Tokyo Medical and Dental University (TMDU) have found that TruB1, a protein known to be involved in RNA modification, can directly bind to and promote the maturation of the microRNA let-7. This novel function of TruB1 can also reduce rates of cell proliferation. This unique anti-cancer role of this protein is crucial information that will assist with the development of novel cancer therapeutics.