Tau and PQBP1: Protein Interaction Induces Inflammation in the Brain

Tokyo, Japan – Just as a home security system can alert a homeowner to the presence of an intruder, a protein called polyglutamine binding protein-1 (PQBP1) found in brain cells can alert the body to the presence of “intruding” viruses like human immunodeficiency virus (HIV). Now, researchers in Japan have shed new light on the role of PQBP1 in the detection of dysfunctional proteins associated with neurodegenerative disorders.

In a new study published in Nature Communications, researchers from Tokyo Medical and Dental University (TMDU) have revealed the role of intracellular receptor PQBP1 in response to Tau, a protein found primarily in neurons that plays a key role in the progression of neurodegenerative disorders like Alzheimer’s disease.

PQBP1 has been previously shown to sense and bind HIV DNA and trigger an immune pathway known as the cGAS-STING pathway to initiate an inflammatory response. While PQBP1 has also been shown to interact with dysfunctional proteins such as those implicated in the neurodegenerative disorder Huntington’s disease, the specific role of PQBP1 in neurodegenerative inflammatory responses was unclear. To better understand this relationship, researchers from TMDU set out to clarify the nature of the interaction between PQBP1 and Tau.

“By characterizing the relationship between PQBP1 and Tau, we were able to clarify a mechanism of inflammation in the brain that functions in both viral infection and neurodegenerative disease,” says senior author of the study, Hitoshi Okazawa (Figure 1). 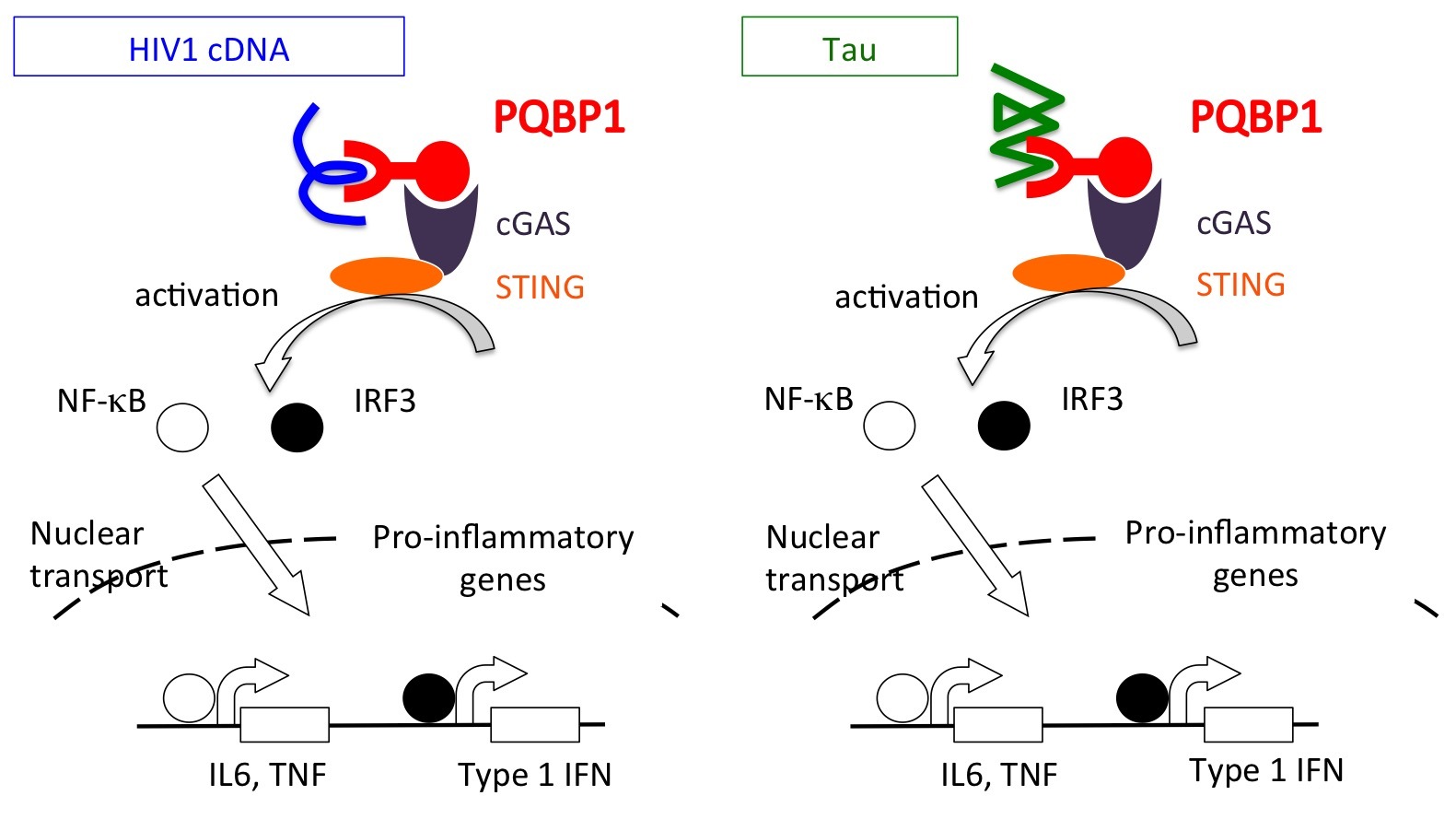 Figure 1
PQBP1, a new intracellular receptor for viral infection and neurodegeneration.
PQBP1 functions in brain microglia, which corresponds to dendritic cells or a part of macrophage regulating innate immune system, as an intracellular receptor for HIV cDNA and Tau proteins similarly.
The researchers performed in vitro analyses using microglia, which are PQBP1-expressing immune cells found in the brain, to demonstrate that Tau interacts with PQBP1 and that this interaction drives an immune response via activation of the cGAS-STING pathway. Their study revealed that the PQBP1-cGAS-STING pathway functions in parallel with TREM2-mediated pathway, whose mutation is known to associate with Alzheimer’s disease genetically (Figure 2).

They went on to use a mouse model in which PQBP1 was conditionally inactivated in microglia to show that expression of PQBP1 is necessary for a Tau-induced inflammatory response in vivo.

“We were pleased to find that inactivating PQBP1 in microglia in the mouse model reduced brain inflammation in response to the injection of Tau into the brain,” says Okazawa.

The team further found that mutations in the PQBP1-binding regions of Tau reduced the inflammation in the brain in response to Tau injection. These findings indicate that PQBP1 may represent a potential target for the development of therapeutics for the treatment of Tau-mediated neurodegenerative diseases.

Researchers from Tokyo Medical and Dental University (TMDU) clarified the relationship between the intracellular receptor PQBP1 and the structural protein Tau, which is dysregulated in neurodegenerative diseases such as Alzheimer’s disease. Tau was found to interact with PQBP1 in immune cells of the brain, which led to activation of the inflammatory cGAS-STING pathway. PQBP1 may represent a potential target for the development of therapeutics to treat Tau-mediated neurodegenerative diseases.