Food for thought: Eating soft foods may alter the brain’s control of chewing

Tokyo, Japan – Incoming sensory information can affect the brain’s structure, which may in turn affect the body’s motor output. However, the specifics of this process are not always well understood. In a recent study published in Scientific Reports, researchers from Tokyo Medical and Dental University (TMDU) found that when young rats were fed a diet of either soft or regular food, these different sensory inputs led to differences in muscle control and electrical activity of the jaw when a specific chewing-related brain region was stimulated.

Chewing is mainly controlled by the brainstem, a brain region that controls many automatic activities such as breathing and swallowing. For chewing, the brainstem is also influenced by signaling that comes from higher brain regions, including the cortical masticatory area (CMA), which can be split into the front (anterior) and back (posterior) parts. When the anterior CMA is stimulated, signals travel through the brainstem and reach the jaw muscles, causing chewing to occur. However, it remains unknown whether incoming sensory information affects chewing under the control of the anterior CMA, something researchers at Tokyo Medical and Dental University decided to address.

“In the developing brain, changes in sensory information can greatly affect the brain’s structure,” says senior author of the study Takashi Ono. “We fed 2-week-old rats either a soft diet or a regular diet, and then investigated a range of different neuromuscular outcomes in response to stimulation of the anterior CMA.”

After rats had been fed the soft or regular diet for 3 to 9 weeks, electrodes were used to stimulate the anterior CMA while the rats’ jaw movements were measured, along with the electrical activity of the jaw muscles. In response to anterior CMA stimulation, rats in the soft diet group had altered movement and electrical activity in the jaw muscles compared with the regular diet group.

“Our findings suggest that the anterior CMA strongly influences the regulation of chewing, and is affected by sensory inputs during development. As such, reduced chewing function during growth should be corrected as soon as possible to avoid any potential adverse effects on jaw muscle development and chewing ability,” says Ono.

Given the importance of chewing for obtaining nutrients, the results of this study could be vital for monitoring and improving chewing ability in young children with chewing difficulties, as well as in adults after trauma or disease. The results of this study suggest that the brain’s control of chewing may be influenced by simply increasing chewing difficulty. 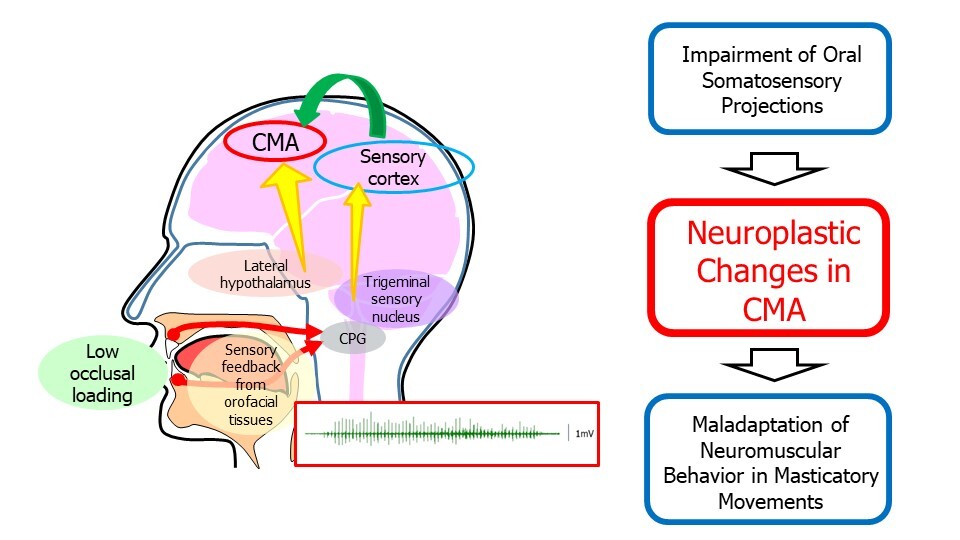 Consequences of low occlusal loading on mastication
Low occlusal loading in malocclusion elicits neuroplastic changes in CMA and causes maladaptation of neuromuscular behavior in masticatory movements.
Inset: A typical example of electromyographic activity with jaw movement patterns elicited by electrical stimulation of the anterior part of the cortical masticatory area in an 11-week-old experimental animal.

###
The article, “Effects of low occlusal loading on the neuromuscular behavioral development of cortically-elicited jaw movements in growing rats,” was published in Scientific Reports at DOI: 10.1038/s41598-021-86581-9

Researchers from Tokyo Medical and Dental University (TMDU) have found that eating a soft diet during development leads to altered electrical activity and movement in the jaw muscles of rats in response to stimulation of the anterior cortical masticatory area. Their findings suggest that reduced chewing function may be at least partly improved by simple treatments that involve increasing the difficulty of chewing, thus improving the brain’s control of jaw movements.