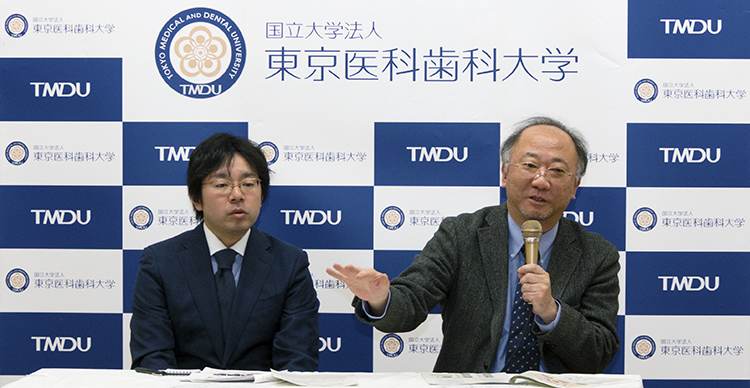 Tokyo – Frontotemporal lobar degeneration (FTLD) is one of the most common causes of early-onset dementia, and can lead to personality changes, impaired speaking, and motor dysfunction. While most cases occur sporadically, several inherited forms of FTLD have been linked to genetic mutations, which can offer clues to the cause of the disease and potential approaches to treatment. In a study published in Nature Communications, researchers have now uncovered several key events that occur in a common form of familial FTLD linked to mutations in the PGRN gene.

FTLD is a neurodegenerative disease caused in part by the build-up of protein aggregates in neurons. Different forms of FTLD—including the two major hereditary forms of the disease, FTLD-tau and FTLD-TDP—are associated with the build-up of different proteins. The hallmark of FTLD-tau is accumulated tau protein, a well-known player in neurological disorders such as Alzheimer’s disease. The hallmark of FTLD-TDP (the form linked to defective PGRN) is the accumulation of TDP43, whose role in the disease is poorly understood.

“One of the reasons less is known about FTLD-TDP is that the current disease models in mice look don’t precisely mimic the way PGRN is mutated in patients,” lead author Kyota Fujita of Tokyo Medical and Dental University(TMDU) explains. “We developed a new model by introducing a mutation in PGRN gene associated with FTLD-TDP. In contrast to the earlier models, the mice in our study exhibit behavioral and cognitive symptoms that very closely mirror the disease pathology seen in humans.”

Using this model, the researchers set out to understand what differentiates PGRN-mutant mice from their healthy counterparts. They focused their search on phosphorylation, a process that is normally involved in cell signaling but is often implicated in neurodegenerative diseases. Phosphorylated proteins have an additional chemical charge that can alter their behavior. In patients with FTLD-tau, as well as in Alzheimer’s disease, phosphorylation of tau is thought drive its accumulation in neurons.

The research team performed a comprehensive search for proteins that are phosphorylated when PGRN is mutated. Notably, they discovered that tau is phosphorylated and specifically localized to synapse in the mutant mice. This was a surprising find, given that tau does not accumulate and have not been implicated in the TDP form of the disease (FTLD-TDP). Nevertheless, they found that phosphorylated tau causes synapse loss, and may disrupt communication between neurons. The toxic tau was seen as early as 4 weeks in mice, while TDP43 did not appear until 24 weeks—suggesting that tau may play a more important role early in the disease.

“Our study shows that tau phosphorylation (but not tau aggregation) is central to the pathology of both forms of FTLD as well as of Alzheimer’s disease,” corresponding author Hitoshi Okazawa concludes. “In the case of FTLD-TDP, phosphorylated tau appears to drive early synapse changes long before TDP43 protein aggregates appear. The therapeutic implications of the study are clear, as the findings suggest that targeting tau phosphorylation may be an effective way to treat the disease at its earliest stages.”

Over the course of the study, the team uncovered a number of molecular events that cause mutated PGRN to lead to tau phosphorylation. With many of the key signaling players now identified, the team is hopeful that future efforts can focus on possible treatment strategies for this form of the disease.

“The tau pathway looks to be a very promising treatment target for familial FTLD associated with PGRN mutations,” Okazawa adds. “We’re very excited to see how our findings will eventually translate into clinical improvement for these patients.” 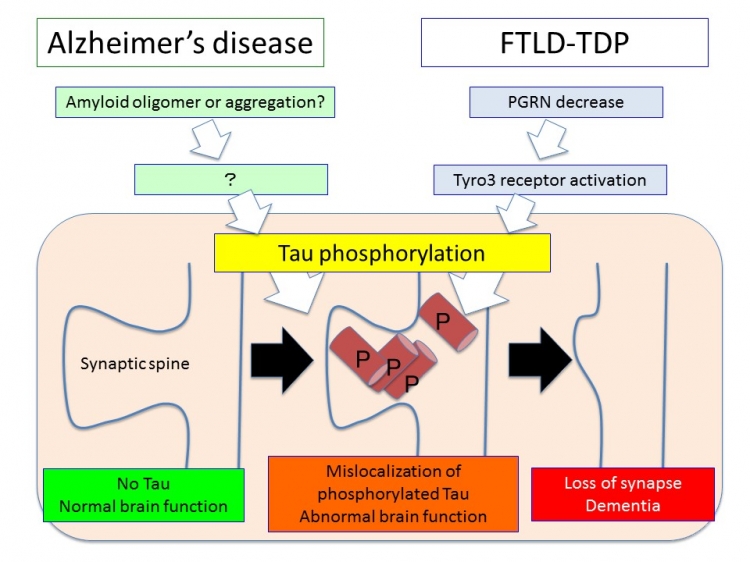 Tau phosphorylation is a common pathway across Alzheimer’s disease, FTLD-tau and even FTLD-non-tau (FTLD-TDP).

Specific pathways of Alzheimer’s disease and FTLD-non-tau (FTLD-TDP linked to PGRN mutations) merge at tau phosphorylation. The mislocalization of phosphorylated tau to dendritic spines degenerates postsynaptic spines and leads to loss of synapse function. The degeneration does not need the intracellular tau aggregation or extracellular amyloid aggregation (senile plaque). Hence the common pathology mediated by tau phosphorylation could initiate at the earliest stage of these degenerative diseases.

Frontotemporal lobar degeneration (FTLD) is a common cause of hereditary dementia, but the molecular events driving the disease are poorly understood. Researchers centered at Tokyo Medical and Dental University(TMDU) developed a mouse model to study a form of FTLD linked to mutations in the PGRN gene (FTLD-TDP). The team discovered that tau protein phosphorylation is a key early event in the pathology of FTLD-TDP, and identified key players in tau phosphorylation that represent potential therapeutic targets.