A breath of fresh air for emphysema research

Researchers at Tokyo medical and dental university (TMDU) and Osaka University have uncovered some of the mechanisms by which emphysema begins to develop, with potential therapeutic consequences for chronic obstructive pulmonary disease
Tokyo, Japan – Chronic obstructive pulmonary disease (COPD) causes illness and death worldwide. It is characterized by destruction of the walls of tiny air sacs in the lungs, known as emphysema, and a decline in lung function. Little has been known about the mechanisms by which it begins to develop. But now, researchers from Japan have found a protein that promotes the development of the early stages of emphysema, with the potential to be a therapeutic target.

COPD can be triggered by environmental factors such as cigarette smoking that result in lung inflammation. The development of inflammation involves the movement of molecules inside cells, and this “intracellular trafficking” is known to be associated with some diseases. The team searched for COPD-related proteins that are involved in trafficking and identified a protein called FCHSD1, which is associated with some diseases but with no currently known role in lung function.

It is possible to create a mouse model of emphysema by treating mice with an enzyme called elastase. The team developed a mouse line that was missing the FCHSD1 protein and studied the responses of these mice in comparison with normal mice when emphysema was induced. Normal mice showed a large increase in FCHSD1 after treatment, while mice lacking FCHSD1 were protected from the development of emphysema. These mice showed less airspace expansion owing to damage to the air sacs in the lungs, and had less inflammation and cell death, known as apoptosis.

The researchers went on to investigate the molecular mechanism by which FCHSD1 acts. A protein called NRF2 moves into the nucleus in response to stress and acts to defend against it. However, FCHSD1 binds to NRF2 and prevents it moving into the nucleus. “Mice with a FCHSD1 deficiency showed enhanced nuclear translocation of NRF2 and a smaller reduction in SIRT1 levels, which is seen to occur as emphysema develops,” explains lead author Takahiro Kawasaki, “and this reduced inflammation and apoptosis of lung cells.”

A potential therapy for COPD could therefore be to increase the activity of NRF2 to counteract FCHSD1. There are treatments currently available that target NRF2, and it may be that inhibiting FCHSD1 at the same time as targeting NRF2 could make these treatments more effective and prevent systemic complications. “Our findings may also lead to a specific therapeutic strategy to ameliorate, or even halt, the progression of emphysema by inhibiting FCHSD1,” says Takashi Satoh, senior author of the paper.

COPD is a highly significant disease. The discovery of this mechanism by which FCHSD1 acts to promote the development of emphysema could lead to new treatments for many people.

The authors declare no competing interests. This work was supported by: the Japan Science and Technology Agency (JST) through funding for Specially Promoted Research (15H05704), a Grant-in-Aid for Young Scientists (A) (16H06234), a Grant-in-Aid for Challenging Exploratory Research (T17K195570), and a Grant-in-Aid for Scientific Research on Innovative Areas (18H05032); the Visionary Research Fund from Takeda Science Foundation and the Joint research chair of innate immunity supported by Otsuka Pharmaceutical Co., Ltd.; PRIME (17gm6110002h0001), ACT-M (17im0210108h0001), and the Research Program on Hepatitis (18fk0310106h0002 and 1 18fk0210041h0001) from the Japan Agency for Medical Research and Development, AMED. 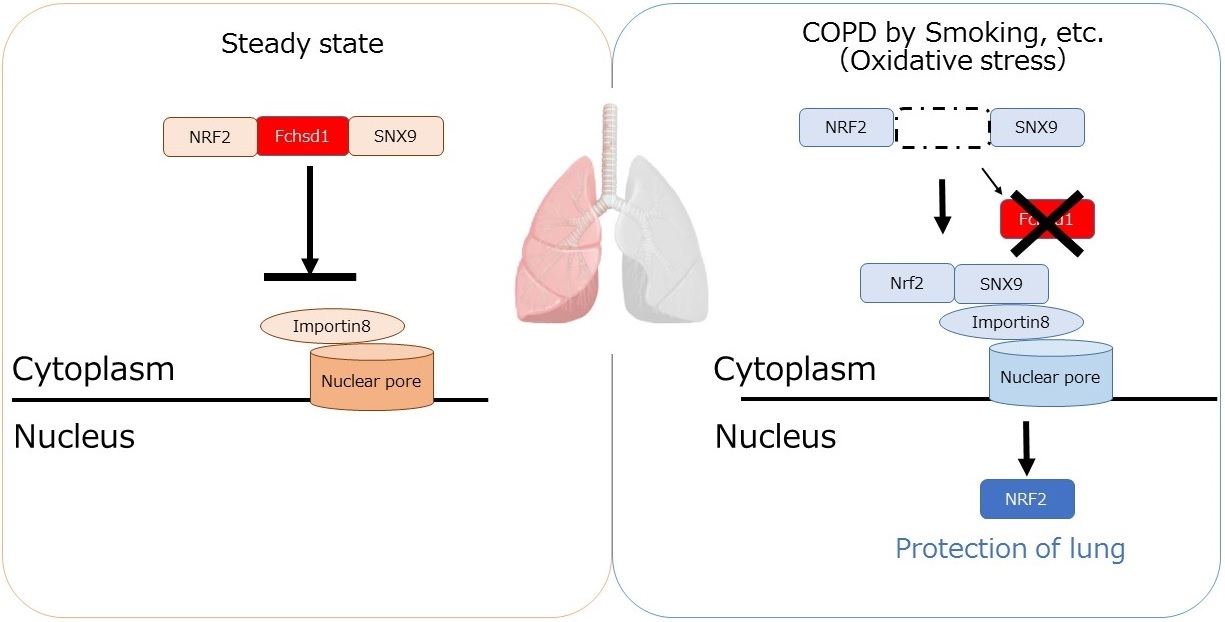 Researchers from TMDU and Osaka University have found that a protein called FCHSD1 is involved in the development of emphysema, which is destruction of the tiny air sacs in the lungs, and is a component of chronic pulmonary respiratory disease that causes illness and death worldwide. Mice deficient in FCHSD1 showed less lung damage, inflammation, and cell death. The team were able to uncover the mechanism by which FCHSD1 acts to promote emphysema, which could lead to the development of new treatments.