Getting to the root of tooth replantation challenges

Tokyo– Completely dislodging a tooth from the socket is not generally considered a reversible process. However, this injury is most common in children, whose roots may not be completely developed, meaning quick reactions could save the tooth. Researchers are continually looking to increase the chance of success in tooth replantation. Now, a team led by researchers from Tokyo Medical and Dental University (TMDU) has reported a gene delivery system that promotes the healing process in a rat model. Their findings are published in Journal of Periodontology.

Replanting a tooth as quickly as possible after it is knocked out provides its best chance of survival. Speed ensures that the periodontal ligament (PDL)—the tissue that holds the tooth in place—and dental pulp do not start to die. Fibers can then reattach, and the blood vessels and pulp tissue can continue to grow and support the tooth.

However, many factors can affect the success of replantation—for example, inflammation—which can stop the PDL regenerating.

One of the messaging pathways that controls inflammation is the nuclear factor-kappa B (NF-κB) pathway. Activation of this pathway produces the proteins that induce inflammation. And inflammation leads to osteoclasts—bone degrading cells—breaking down the tissue around the root of the tooth, often spelling the end of any hope of successful replantation.

A recently reported way of stopping the NF-κB pathway is to use NF-κB decoy oligodeoxynucleotides (ODNs), which prevent NF-κB biding to its target genes. However, getting the large NF-κB decoy ODNs to where they need to be to have an effect can be challenging.

The TMDU researchers loaded NF-κB decoy ODNs into poly(lactic-co-glycolic acid) nanospheres to give NF-PGLA. Incorporating the therapeutic cargo into the nanosphere system protected it until it reached the site of action.

“We tested our delivery system in rats by immersing extracted incisors in different solutions before replanting them,” explains study first author Kai Li. “We found that the teeth treated with NF-PGLA showed significantly greater dental root thickness, which is necessary for successful replantation.”

The researchers also found that no root resorption—dissolving of the tooth root—was observed 7 days after treatment with NF-PGLA. In addition, there were fewer osteoclasts 7 and 14 days after replantation for NF-PGLA-treated teeth.

“Application of our NF-PGLA system encouraged the healing process by preventing the exacerbation of inflammation,” says study corresponding author Yuji Ishida. “We believe that our delivery system will contribute to significantly improving the success of tooth replantation in the clinic,” adds principal investigator Takashi Ono. 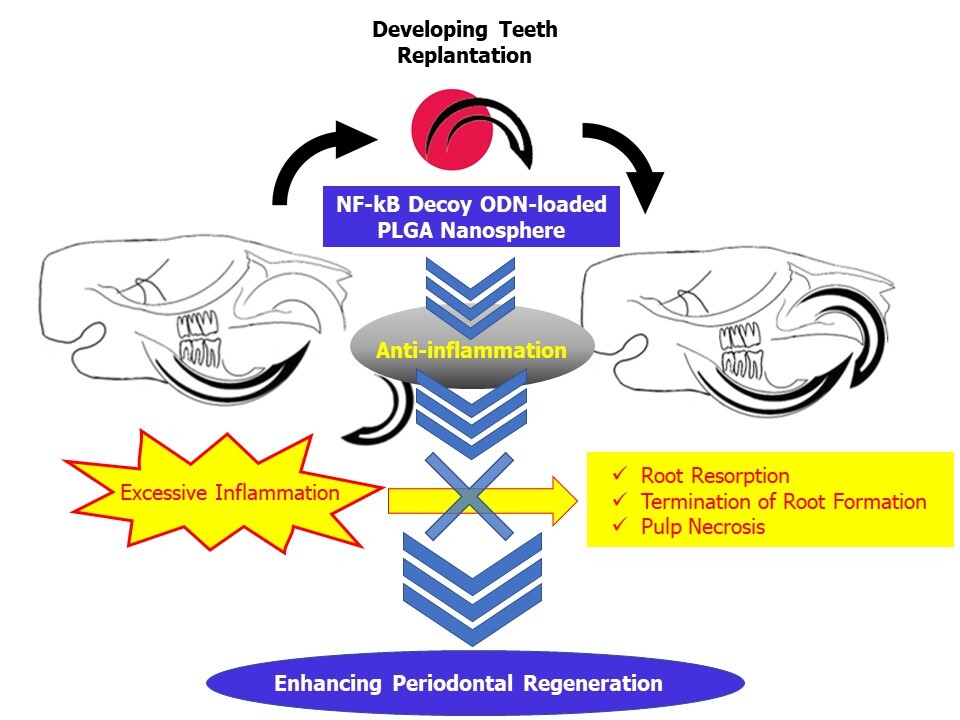 Researchers led by Tokyo Medical and Dental University (TMDU) used a poly(lactic-co-glycolic acid) nanosphere system to enhance the delivery of NF-κB decoy oligodeoxynucleotides to the roots of replanted rat teeth. The NF-PGLA treatment inhibited excessive inflammation in the periodontal ligament, which helped to prevent the root being resorbed and promoted tissue regeneration. It is hoped that this successful demonstration in rats will lead to more effective tooth replantation for patients in the clinic.