A Filter for Cleaner Qubits

A Filter for Cleaner Qubits

Researchers at the Tokyo Medical and Dental University (TMDU), RIKEN, and the University of Tokyo propose an improved method for isolating the qubits in a quantum computer from the external environment, which may help usher in the era of practical quantum computing

Tokyo, Japan – A research team at the Tokyo Medical and Dental University (TMDU), RIKEN, and the University of Tokyo have demonstrated how to increase the lifetime of qubits inside quantum computers by using an additional “filter” qubit. This work may help make higher fidelity quantum computers that can be used in financial, cryptographic, and chemistry applications.

Quantum computers are poised to make a large impact in a variety of fields, from internet security to drug development. Instead of being limited to binary 0s and 1s of classical computers, the qubits in quantum computers can take on values that are arbitrary superpositions of the two. This allows quantum computers the potential to solve certain problems, like cracking cryptographic ciphers, much faster than current machines.

However, there is a fundamental tradeoff between the lifetime of the qubit superpositions and the processing speed. This is because the qubits must be carefully shielded from interacting with the environment, or the fragile superposition will snap back to being just a one or zero in a process called decoherence. To delay this loss of quantum fidelity, qubits in quantum computers are coupled only weakly to the control line through which the qubit control pulses are applied. Unfortunately, such a weak coupling limits the speed that computations can be run.
Now, the team at the Tokyo Medical and Dental University (TMDU) theoretically show how coupling a second “filter” qubit to the control line can greatly reduce the noise and spontaneous radiative losses that lead to decoherence. This allows the connections to be strong, which lends itself to faster cycle times.

“In our solution, the filter qubit acts like a nonlinear mirror, which completely reflects radiation from the qubit due to destructive interference but transmits strong control pulses due to absorption saturation” says first author Kazuki Koshino.
This research helps bring about a future in which quantum computers can be found in every business and research lab. Many operational research firms would like to use quantum computers to solve optimization problems that were considered too intensive for conventional computers, while chemists would like to use them to simulate the motion of atoms inside molecules.

“Quantum computers are improved day by day by companies including IBM and Google. As they become faster and more robust, they can be even more widespread,” says senior author Yasunobu Nakamura.

The work is published in Physical Review Applied as “Protection of a qubit via subradiance: A Josephson quantum filter” (DOI:10.1103/PhysRevApplied.13.014051)

Figure 1:
Schematic of a Josephson quantum filter (JQF). The data qubit (DQ) to be protected and the JQF are directly coupled to a semi-infinite waveguide, through which control pulses for the DQ are applied. 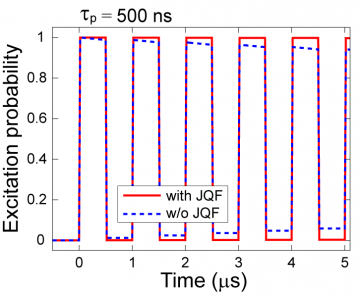 Figure 2:
Time evolution of the excitation probabilities of the data qubit under successive application of pi-pulses. The red solid (blue dotted) line shows the results with (without) the JQF.

Researchers at the Tokyo Medical and Dental University (TMDU), RIKEN, and the University of Tokyo show theoretically how coupling an additional filter qubit to the control line of a quantum computer can greatly increase the lifetime of the information stored in it. This work can help make quantum computers more robust and accurate.