Tokyo – Organofluorine compounds are highly coveted by the chemical industry for use in pharmaceuticals, agrochemicals, and materials such as lubricants and Teflon. The resultant increased demand for these compounds has prompted researchers to seek new ways to introduce fluorine into organic molecules. Many methods are now available for incorporating fluorine atoms or trifluoromethyl (–CF3) groups into molecular structures, but synthesizing more complex fluorinated compounds remains a challenge.

Now, in a study recently published in Angewandte Chemie, researchers at Tokyo Medical and Dental University (TMDU) have reported their development of a method for transforming just one of the C–F bonds in an aromatic –CF3 group. They subsequently used the technique to generate a variety of difluoromethyl (–CF2–)-containing organic compounds. 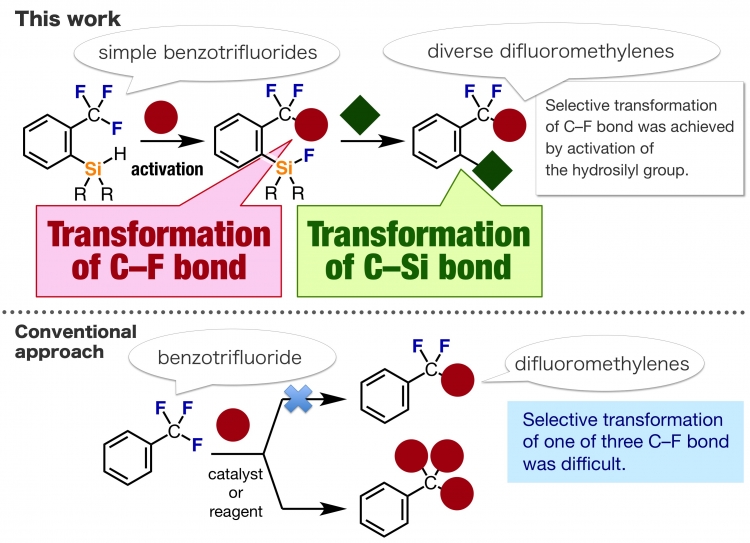 The TMDU researchers first generated a silyl cation from an aromatic trifluoromethyl compound with a hydrosilyl group in the ortho position of the aromatic ring.

“We chose this compound because we expected the silyl cation to trigger the cleavage of just one of the C–F bonds in the adjacent –CF3 group,” first author Suguru Yoshida explains.

The transformation took place selectively at the –CF3 group next to the silyl group, even when other –CF3 groups were present in the molecule. Cleavage of the C–F bond resulted in formation of a fluorosilyl group and a carbocation intermediate, which further reacted with allylsilanes to selectively give high yields of the fluorine-containing monoallylated products.

The fluorosilyl group in the product is more reactive than the hydrosilyl group in the starting material. This means the difluoromethylated products can react further if they are activated with a base. The TMDU researchers used this property to remove the silyl group completely or to generate a new C–C bond in its place. They were also able to functionalize the introduced allyl group, and expect that a wide variety of difluoromethylated products could be generated in this way.

“The scope of the reaction appears to be very wide,” corresponding author Takamitsu Hosoya says. “The reaction works very well when there are electron-rich substituents on the aromatic ring, and also gives moderate yields with electron-poor substituents.”
The TMDU researchers have also used their new reaction to introduce other nucleophiles onto the –CF2– group, generating chlorodifluoromethyl (–CF2Cl) and difluoromethyl-containing ester-substituted aromatics, and plan to incorporate other nucleophiles into the molecule in future work.

The article, “Single C–F Bond Cleavage of Trifluoromethylarenes with an ortho-Silyl Group” was published in Angewandte Chemie International Edition at DOI: 10.1002/anie.201604776

Tokyo Medical and Dental University (TMDU) researchers developed a new method for generating difluoromethyl (–CF2–) groups from trifluoromethyl (–CF3) groups in organofluorine compounds. They generated a silyl cation in a benzotrifluoride molecule that abstracted a fluorine atom from an adjacent –CF3 group and then reacted the resulting carbocation with a variety of nucleophiles. The difluoromethylated products could easily be transformed further into organofluorine compounds containing a wide variety of functional groups.