Tokyo – Spinocerebellar ataxia is a group of neurodegenerative diseases characterized by progressive incoordination of gait, and is often associated with poor coordination of hands, speech, and eye movements. There are different types of SCA, and these are classified based on the mutated (altered) gene. In spinocerebellar ataxia type 1 (SCA1), the causative gene ATXN1 and its interacting factors were determined over two decades ago. However, SCA1 remains intractable, and no disease-modifying therapy has reached the clinical bedside.

As with other neurodegenerative diseases, the understanding of spinocerebellar ataxias, including SCA1, has changed over time. The types of affected neurons are not as specific as initially believed, the effects of these disorders are not limited to single organs, and SCA might be a developmental disorder that affects cerebellar neurons during embryo formation or in early childhood.

These changes in the conception of neurodegenerative conditions have not deterred researchers at Tokyo Medical and Dental University (TMDU) to delve deep into the underlying mechanisms of these diseases. The researchers previously found the overexpression of YAPdeltaC, the neuronal isoform of the protein YAP which is involved in the regulation of gene expression, prevents transcriptional repression-induced atypical death (TRIAD) of neurons in Huntington’s disease in vitro models. TRIAD is a distinct form of cell death; it is extremely slow in comparison with apoptosis, necrosis, or autophagy.

In a new study, the researchers further tested the therapeutic effect of YAPdeltaC – this time on SCA1 pathology in mice. They published their findings in Nature Communications.

The researchers also found that YAP/YAPdeltaC functioned as a transcriptional co-activator of RORα, a protein essential for development of cerebellum through direct regulation of genes expressed in Purkinje cells, a class of GABAergic neurons found in the mice cerebellum. The supplementation of YAP/YAPdeltaC successfully overcame the toxic effect of mutant Atxn1 protein and restored the
transcriptional activity of RORα. 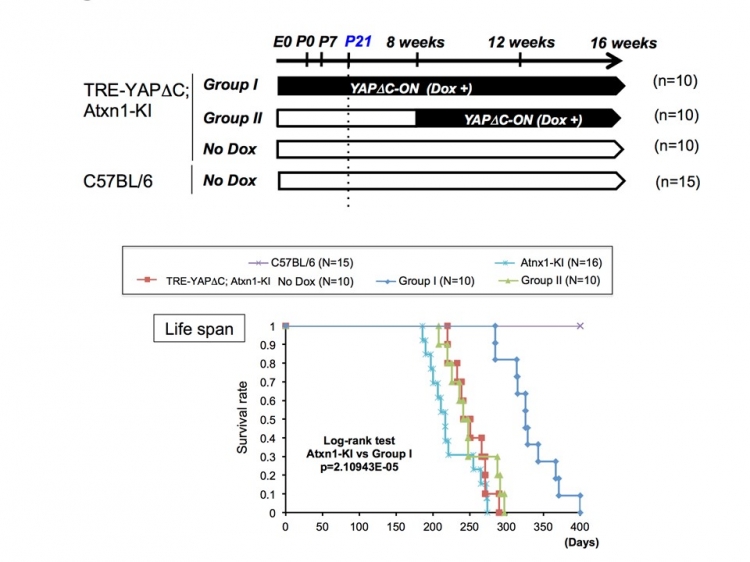 “Collectively, our results indicate that functional impairment of YAP/YAPdeltaC by mutant Atxn1 protein during development determines the adult pathology of SCA1,” corresponding author Hitoshi Okazawa says. “We believe certain molecular signatures generated during development significantly influence late-onset phenotypes, and that these signatures act by restoring gene expression to optimal levels. Therefore, identification of these signature genes would enable us to manipulate the late-onset cell death of SCA1 – and even other neurodegenerative diseases – in the future.”

The article, “Developmental YAPdeltaC determines adult pathology in a model of spinocerebellar ataxia type 1” was published in Nature Communications at DOI: 10.1038/s41467-017-01790-z.

YAP and its neuronal isoform YAPdeltaC are involved in expression and regulation of genes. A team of Tokyo Medical and Dental University (TMDU)-centered researchers found expression of YAPdeltaC during development, but not adulthood, stopped neurodegenerative disease spinocerebellar ataxia type 1 (SCA1) in mice. Notably, YAPdeltaC supplementation overcame the toxic effect of mutant Atxn1 protein in SCA1. The findings serve as valuable information for potential manipulation of late-onset cell death of SCA1.