Researchers at Tokyo Medical and Dental University (TMDU) have shown that cells from organisms ranging in complexity from yeast to mammals have a previously unidentified mechanism of degrading large numbers of excess or accumulated proteins, which improves our understanding of how order is maintained within cells.

Tokyo, Japan – A range of malfunctions regularly occur within cells, such as proteins not being properly folded up or accumulating at inappropriately high levels. Cells have various tools to deal with these problems, such as specific labels that are placed on faulty components to ensure that they are degraded, and compartments within the cells to which these components are sent to be broken down. However, it has been shown that cells with defects in these tools remain healthy, suggesting the existence of alternative pathways that can compensate for such defects. In a major breakthrough in the study of cellular housekeeping, a research team at Tokyo Medical and Dental University has identified another pathway for the large-scale degradation of proteins, which is similar in form among many different organisms.

Cells perform a dazzling array of functions, such as sensing changes in external conditions, responding to these changes by producing building blocks for use inside and outside the cell, and sorting these building blocks into different compartments within the cell or exporting them. Just like suitcases getting lost at an airport and causing a delayed plane, it is no surprise that the complexity within a cell sometimes leads to errors in this production and sorting. Cells have various mechanisms to overcome these errors and ensure the smooth running of operations. These include autophagy, whereby superfluous cellular components are walled off from the rest of the cell in a separate compartment and broken down for recycling.

Despite the importance of autophagy for cellular functions, cells that have lost the ability to perform this type of housekeeping can still maintain their normal functions. Researchers at Tokyo Medical and Dental University have made a major breakthrough in the field of cell biology by identifying another degradation pathway that could explain this phenomenon. Called GOMED, this pathway is the same in both simple and complex organisms, ranging from yeast to mammals.

“We first studied yeast cells in which normal autophagy had been blocked,” says Shigeomi Shimizu of the Department of Pathological Cell Biology, Tokyo Medical and Dental University. “We found that a truncated fluorescently labeled protein that would normally be degraded did actually get degraded, despite the autophagy process not being active.”

The team then used microscopy to investigate the location of fluorescence from this protein within the cell and the subcellular compartments involved in its degradation. This revealed the involvement of a subcompartment called the Golgi apparatus, which deals with the sorting, packaging, and redirection of cellular components.

“The fact that very similar versions of this mechanism are present from yeast to mammals suggests that it is very important,” says researcher Hirofumi Yamaguchi. “Now that we know of its existence, we can study it more, find out how it interacts with other degradation pathways, and obtain a more comprehensive understanding of how cells get rid of waste.” 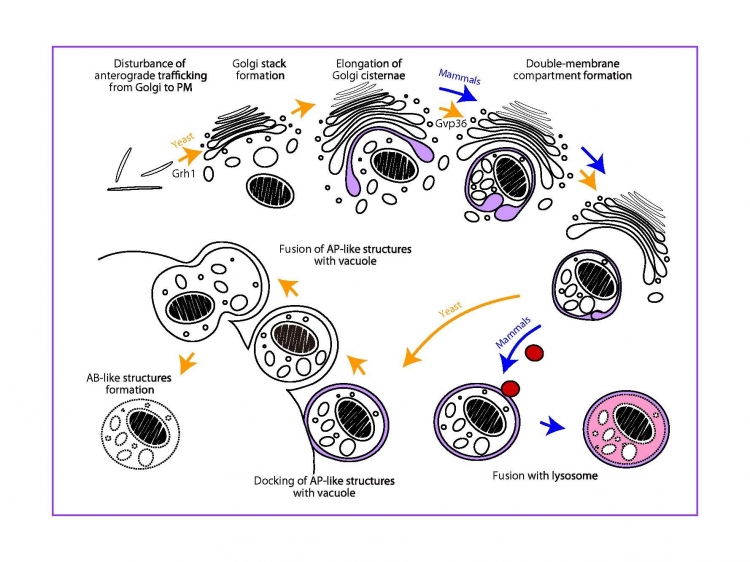 The article “Golgi membrane-associated degradation pathway in yeast and mammals” was published online in The EMBO Journal on August 10, 2016.

Researchers have discovered a new pathway by which cells degrade excess proteins. This pathway, called GOMED, is the same in organisms ranging from yeast to mammals and shows some similarities to autophagy. It involves the packaging of insulin granules using the Golgi membrane, and functioned when a defect in autophagy was introduced. This finding may reshape our understanding of how cells dispose of their waste to maintain normal functions.