Points
・ The autoimmune diseases such as rheumatoid arthritis and multiple sclerosis are caused by a recently identified T-cell subset “Th17 cells”. Researchers at Tokyo Medical and Dental University discovered that a transcriptional regulator, IκBζ, is essential for the development of Th17 cells.
・ IκBζ-deficient mice were shown to have a defect in Th17 development and a resistance to experimental autoimmune encephalomyelitis, which is a mouse model of multiple sclerosis. These findings indicate that the targeting of IκBζ will be effective in the treatment of autoimmune diseases.


A research group led by Prof. Hiroshi Takayanagi and Visiting Research Associate Kazuo Okamoto at Department of Cell Signaling, Graduate School of Medical and Dental Sciences, Tokyo Medical and Dental University revealed that a transcriptional regulator, IκBζ, is essential for the differentiation of a unique T-cell subset “Th17 cells”, which is closely related to the onset and progression of autoimmune diseases. This was achieved in cooperation with the research groups of Tohoku University, Osaka University and the U.S. National Institute of Environmental Health Sciences. This work was supported in part by Grant-in-Aids from the Japan Society for the Promotion of Science (JSPS), Grants-in-Aid for GCOE Program from the Ministry of Education, Culture, Sports, Science and Technology of Japan (MEXT), and ERATO, Takayanagi Osteonetwork Project from Japan Science and Technology Agency (JST). The research results were published online on 11 April 2010 in Nature.


Background
The immune system protects hosts from various microorganisms and other foreign substances. However, if dysregulated, the immune system reacts to self-antigens and mistakenly attack the self-tissues, causing autoimmune diseases. There are many types of autoimmune diseases: rheumatoid arthritis (RA), which has a worldwide prevalence of approximately 1 %, is a chronic inflammatory disease characterized by progressive joint destruction. Multiple sclerosis (MS) is a central nervous system disease that leads eventually to neurologic disability. Unfortunately, most of current treatments for autoimmune diseases are non-selective and thus have side effects. Therefore, there is an urgent need to develop effective therapeutic strategies that specifically target the pathway(s) involved in pathogenesis of autoimmune diseases.
Recently, interleukin (IL)-17-producing CD4+ helper T cells “Th17 cells” have been identified as a new helper T cell subset. The cytokines produced by Th17 cells such as IL-17 have multiple effects on various cell types and induce the production of proinflammatory cytokines and chemokines to attract neutrophils to the site of inflammation. This unique subset thus plays an important pathogenic role in autoimmune diseases. In addition, our previous studies demonstrated that Th17 cells function as osteoclastogenic helper T cells in bone destruction associated with inflammation such as RA. Now, Th17 cell subset has attracted considerable attention in the immunology field as an auspicious therapeutic target for autoimmune diseases.


Content of the research
In response to antigen stimulation, naïve CD4+ T cells differentiate into Th17 cells in the presence of IL-6 and TGF-β. However, the molecular mechanisms underlying Th17 cell differentiation are not fully elucidated (Figure 1). A better understanding of the mechanism of Th17 cell differentiation is required for development of effective therapeutic strategies against autoimmune diseases.
A research group led by Prof. Hiroshi Takayanagi and Visiting Research Associate Kazuo Okamoto found that a transcriptional regulator, IκBζ, was highly expressed in Th17 cells. The expression of IκBζ was induced in CD4+ T cells by the combined stimulation with cytokines (IL-6 plus TGF-β and antigen. Subsequent analyses clarified that IκBζ enhanced the expression of various genes involved in Th17 cell functions including IL-17, by directly binding to the regulatory region of these genes (Figure 2). Furthermore, IκBζ deficiency led to an impairment of Th17 cell differentiation both in vitro and in vivo. It is noteworthy that IκBζ-deficient mice were highly resistant to experimental autoimmune encephalomyelitis, which is a mouse model of MS (Figure 3).


Future potential
The research group gained new perspectives on the transcriptional program of Th17 cell lineage commitment. These findings will provide new insights into the pathogenesis of Th17-linked autoimmune diseases, and raise the possibility that the targeting of IκBζ may prove effective in the treatment of autoimmune diseases. Thus, for the future, it will be necessary to develop therapeutic strategies that specifically block the function of IκBζ or the upregulation of IκBζ expression in T cells.

Figure 1
Th17 cells play a critical role in the pathogenesis of autoimmune diseases
In response to self-antigen, in the presence of IL-6 and TGF-β, naïve CD4+ T cells differentiate into autoreactive Th17 cells, which mistakenly attack healthy tissues and cause various autoimmune diseases such as rheumatoid arthritis and multiple sclerosis. However, the molecular mechanisms of Th17 cell differentiation are not fully understood. 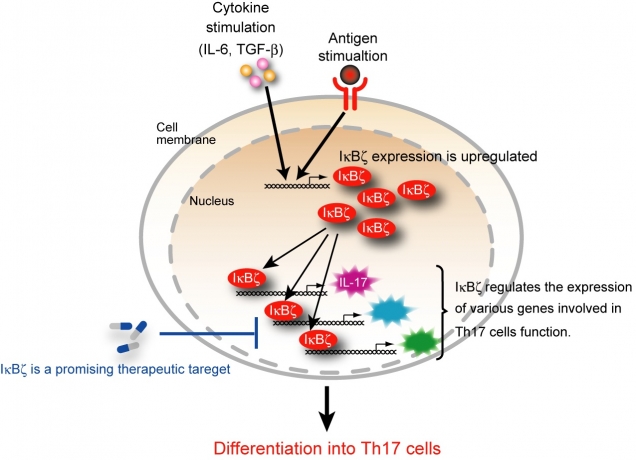 Figure 2
IκBζ is essential for the transcriptional program of Th17 development
In CD4+ T cells, IκBζ expression is induced by the combined stimulation with cytokine (IL-6 plus TGF-β and antigen. IκBζ regulates the expression of various genes involved in the function of Th17 cells such as IL-17. Inhibition of IκBζ is potentially beneficial for the treatment of the autoimmune diseases.