Published: August 26, 2021
Researchers from Tokyo Medical and Dental University (TMDU) find a genetic variant associated with a worse prognosis of the long-term lung condition in chronic hypersensitivity pneumonitis
Tokyo, Japan – Chronic hypersensitivity pneumonitis (CHP) is a long-term lung condition where the interstitial tissue surrounding the alveoli (air sacs) of the lungs becomes inflamed and develops “fibrosis”, or scar tissue. It occurs when susceptible individuals inhale allergens. The full process and circumstances underlying the development of the condition are currently unknown, but it is thought to have a strong genetic component.

Now, in a study published in the journal Chest, a team at TMDU have discovered a link between the condition and a variant in a gene known as TOLLIP. This gene encodes TOLLIP (Toll-interacting protein), which acts as a negative regulator of innate immunity. The innate immune pathway is the body’s first defense against pathogens and is also involved in the response to allergens. The researchers took a cohort of patients with CHP and looked at the genetic variation in single-nucleotide polymorphisms (SNPs), places in the genome where variation occurs at a single position in the DNA sequence.

“We found that one genotype of an SNP known as rs5743899 was associated with a higher degree of immune activation and an increase in the cellular signaling responses leading to fibrosis. This causes a progressive reduction in lung function in patients with CHP”, says lead author Shinji Katayanagi. The patients with the “GG” genotype of this SNP showed more severe disease progression and a steeper decline in the forced vital capacity (FVC), a test of lung function that measures the maximum amount of air able to be expelled from the lungs after a maximum inhalation.

The team observed that patients with the GG genotype had lower levels of TOLLIP in the lungs compared with patients with the other genotypes. They also showed increased fibrotic activity in the lungs in these patients, as they detected both a higher level of the phosphorylated form of a protein called Smad2, a major component of the fibrotic pathway, and increased levels of periostin, a marker of fibrosis. “It seems that the functional changes caused by the TOLLIP variant are associated with rapid FVC decline in CHP due to the dysregulation of fibrosis-related signaling pathways such as Smad/TGF-β and NF-κB signaling”, says senior author Yasunari Miyazaki.

The identification of the association between this genotype of the rs5743899 SNP and a poorer prognosis of CHP could prove invaluable for assessing patients at their initial diagnosis, and for guiding their treatment. 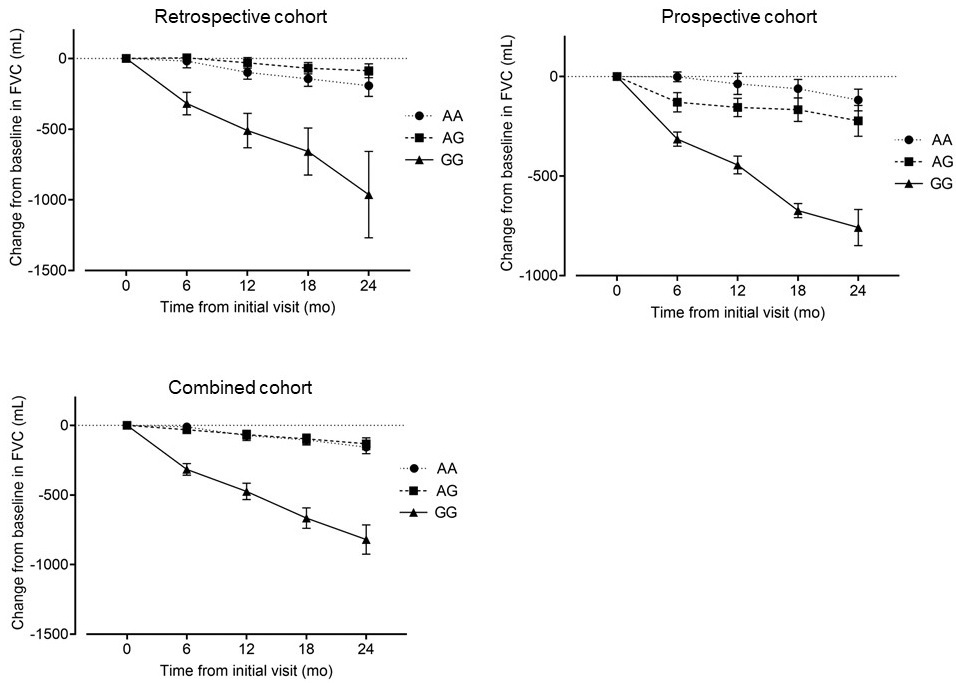 Figure 1. Mean observed changes from baseline in forced vital capacity (FVC) over time in chronic hypersensitivity pneumonitis subgroups stratified by genotype at rs5743899.
The GG genotype showed significant decline in FVC over 2 years compared with AA and AG. Importantly, these results were consistent in the retrospective and prospective cohort as well as in the combined cohort.
###
The article, “Alternative gene expression by TOLLIP variant is associated with lung function in chronic hypersensitivity pneumonitis”, was published in Chest at DOI: 10.1016/j.chest.2021.08.052

Researchers from TMDU have described a genetic variant in a gene known as TOLLIP that is associated with a worse prognosis of chronic hypersensitivity pneumonitis, a long-term lung condition where scar tissue develops in the lungs because of exposure to allergens. One genotype of this variant is linked to reduced TOLLIP protein in the lungs and increased profibrotic signaling. This discovery could be beneficial for assessing patients at their initial diagnosis and guiding their treatment.