Tokyo – Hepatitis B is a common viral infection that can lead to major liver damage or liver cancer if chronic infection occurs. The virus can remain within infected host cells for long periods despite the immune system’s efforts to remove it, yet how it manages this is unclear. Researchers need a cell model that can be infected by the hepatitis B virus for a long period while mimicking normal responses in the body.

Now, as reported in a study in Scientific Reports, a team led by Tokyo Medical and Dental University (TMDU) researchers established a pair of cell lines ideal for studying how the virus and infected host cells interact. These cell lines overcome the disadvantages of earlier models, such as cells from liver tumors, by being easily infected, maintaining uniform characteristics over a long period, and exhibiting typical immune responses to infection.

The infection models were developed from induced pluripotent stem (iPS) cells—normal cells in the body that have been genetically engineered to resemble embryonic cells—in terms of being able to differentiate into many different cell types (Fig 1). When these cells were induced to express a molecule called NTCP on their surface, they were easily infected with hepatitis B virus. This was revealed by also making this virus express a light-emitting protein similar to that found in fireflies. “We encouraged the iPS cells to adopt the characteristics of cells found in the liver and then saw that the hepatitis B virus easily entered them,” study lead author Sei Kakinuma says. “These cells then produced many viral particles, which is how the virus spreads. All the findings indicated that the cells could act as a model strongly resembling typical infection in humans.”

The iPS-derived cells were classified into two different groups depending on their level of differentiation from their progenitors. The characteristics of infection for these groups differed, providing a hint about how the hepatitis B virus persists in cells that are continually dividing.

“These cells that are easily infected but otherwise change little should be incredibly useful for learning more about this disease,” corresponding author Yasuhiro Asahina says. “We can test different drugs on them or knock out different genes in them to see the effects on hepatitis B infection.”

The resemblance between viral infection of these cell models and what actually happens in hepatitis B patients is a major advance. It suggests that future findings obtained from studying these cells would be readily transferable to a clinical context, hopefully leading to more effective treatments for this disease (Fig 2). 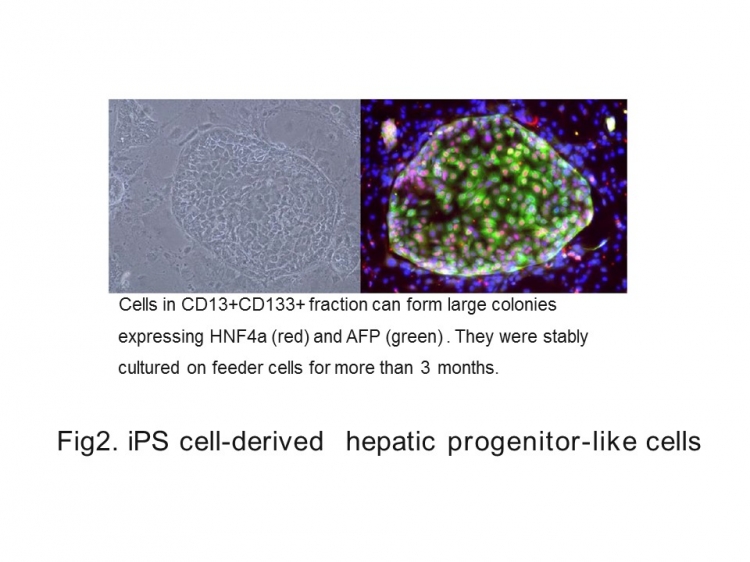 The article “Human induced pluripotent stem cell-derived hepatic cell lines as a new model for host interaction with hepatitis B virus” was published in Scientific Reports at DOI: 10.1038/srep29358

Researchers established new liver cell models derived from induced pluripotent stem cells to facilitate the study of hepatitis B infection. The models are more easily and stably infected than earlier equivalents, and exhibit immune responses more strongly resembling those in hepatitis B patients. Use of these cell models in future work should boost understanding of how the hepatitis B virus can maintain itself in the body for long periods in cases of chronic infection.