Diabetic status modifies the impact of an NAFLD-associated SNP

Tokyo, Japan - Context is known to influence many spheres. And now, researchers from Japan have found that a patients’ health context—that is, the other conditions a patient has—can determine whether a specific gene mutation is helpful or harmful. Researchers from Tokyo Medical and Dental University (TMDU) and Cincinnati Children’s Hospital Medical Center (CCHMC) have revealed that a genetic mutation with a controversial connection to liver disease confers different levels of risk depending on whether patients have diabetes.

Non-alcoholic fatty liver disease (NAFLD) is the most common liver disease, and can develop into nonalcoholic steatohepatitis (NASH) involving fat accumulation, damage, and inflammation in the liver. Known genetic variants explain only a modest fraction of the risk of developing NAFLD/NASH, and researchers disagree on the importance of certain mutations.

“The association of the glucokinase regulatory protein (GCKR)-rs1260326 mutation with NAFLD is widely debated,” says first author Masaki Kimura at CCHMC. “This mutation appears to protect patients from diabetes and chronic kidney disease, but is associated with an increased risk of NAFLD and other diseases.”

To better understand the role of GCKR-rs1260326 in NAFLD/NASH, cells were taken from 24 donors and grown into tiny liver-like organs, called organoids. Feeding them extra fatty acids resulted in fat accumulation, inflammation, and insulin resistance, traits that are seen in the livers of patients with NASH. The connections between genetic variants and liver organoid features were then closely analyzed.

“The results were very clear,” states Takanori Takebe, senior author. “We found that the NAFLD/NASH risk connected to the GCKR-rs1260326 mutation in our organoid model was very high, despite it rarely being considered to be clinically significant.”

Furthermore, the researchers found that treating patients with metformin, a drug commonly used for diabetes, only worked when patients carried unmutated copies of GCKR. However, combined treatment with the drugs nicotinamide riboside and nitozoxanide improved the function of the liver organoids with two copies of the GCKR-rs1260326 mutation.

“This finding suggests a new treatment approach that could make a real impact in the lives of diabetic patients with the mutation who do not respond to standard medication,” states Kimura.

With NAFLD affecting nearly one billion people globally, early identification of patients who need different types of care may improve NASH prevention and treatment. In addition, this study shows that studying organoids ‘‘in a dish’’ and combining this information with clinical data can offer rich insight into complex, common diseases. 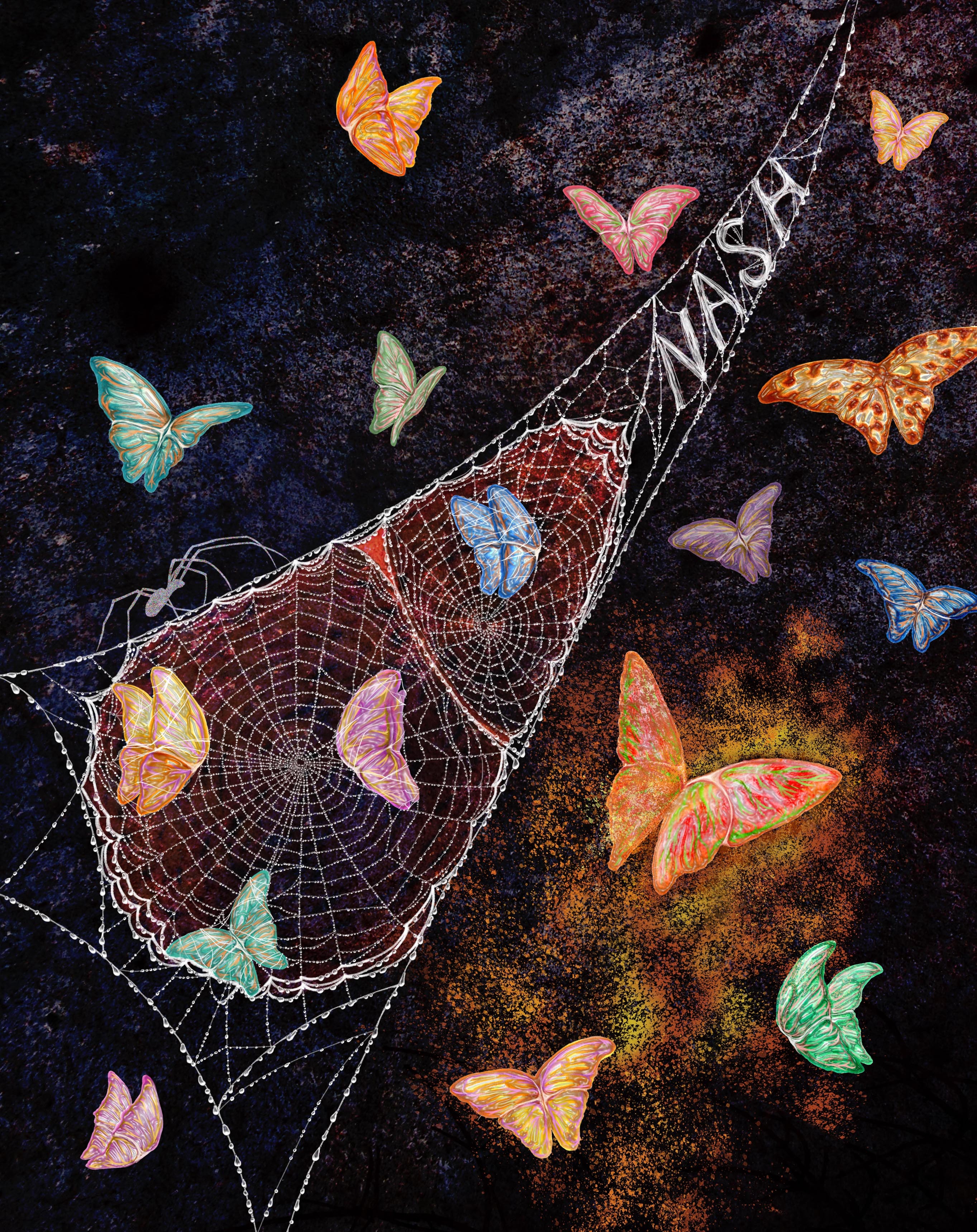 Organoid butterflies on NASH spider web
Non-alcoholic steatohepatitis (NASH) is a common disease that affect nearly billion people globally and so early identification of susceptible individuals is critical for precision hepatology. In this issue, Takebe et al. use human liver organoids and perform en masse population-based phenotypic analysis under insulin insensitive conditions to investigate key NASH-genetic factors. In the image, multiple flying butterflies with liver-like wings suggest liver organoids at “population” scale. Some butterflies are caught by the “NASH” spider web, which illustrates steatohepatitis-like phenotype. This is a metaphor that genetic association can be better captured in a certain metabolic state, enabling efficient evaluation of genetic markers for common disorders like NASH.