Tokyo, Japan – For most people, there is no scarier diagnosis than that of cancer. While treatments including chemotherapy and radiotherapy have been used since the 1940s and late 1800s, respectively, immunotherapy has more recently emerged as a viable and successful approach to cancer treatment. Indeed, evasion of the host immune system is an essential feature of tumorigenesis. Figuring out how cells do this, and disrupting it, to allow the patient’s own immune system to eliminate the cancer cells, is the basis of immunotherapy.

In a study published in August 2020 in Nature Cell Biology, a team including researchers from Tokyo Medical and Dental University (TMDU) and Harvard Medical School (HMS) have identified the regulatory mechanisms through which the PD-L1 immune check-point protein dictates the efficacy of anti-PD-L1 immunotherapy.
“We already knew that immunotherapies targeting immune-checkpoint inhibitors were somewhat successful in treating some cancer types,” says co-author Naoe Taira Nihira. “However, only a subset of patients achieved long-lasting results.”

Using a variety of advanced molecular, biochemical, and bioinformatics approaches, the researchers examined PD-L1 acetylation, localization, function, and interactions. They found that plasma membrane localized PD-L1 translocates to the nucleus by interacting with transport pathway components. Specifically, by introducing a series of mutations into PD-L1 and expressing different acetyltransferases, they determined that PD-L1 is acetylated by p300 at a specific residue within the cytoplasm called Lys263. Using similar approaches, and protein depletion by short-interfering RNAs, they also discovered that histone deacetylase (HDAC) specifically interacts with and deacetylates PD-L1.

Protein modifications, including acetylation, can affect protein stability, dimerization, or localization. However, when the team reduced the amount of HDAC2 protein in the cells, consequently increasing the acetylation level, there were no observable changes in protein stability or dimerization. Co-author Akira Nakanishi explains: “These results mean that the acetylation and deacetylation of PD-L1 at this residue play a critical role in its nuclear translocation.”

In the nucleus, PD-L1 regulates the expression of pro-inflammatory and immune-response-related genes, indicating that PD-L1 could function to regulate the local tumor immune environment to control its sensitivity to immune checkpoint-blockade therapy .


”A schematic diagram of molecular mechanism of nuclear translocation of PD-L1 and its functions.” 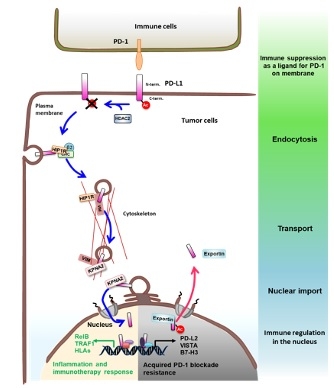 Given the health and economic burdens of cancer worldwide, new treatment approaches with increased efficacy are continually being sought. The results presented by this team indicate that targeting PD-L1 translocation can be used to enhance the efficacy of PD-1/PD-L1 blockade-based immunotherapy approaches.

The article, “Acetylation-dependent regulation of PD-L1 nuclear translocation dictates the efficacy of anti-PD-1 immunotherapy” was published in Nature Cell Biology at DOI: 10.1038/s41556-020-0562-4

Researh teams of Tokyo Medical and Dental University (TMDU) and Harvard Medical School (HMS) have uncovered how to increase the efficacy of anti-PD-L1 immunotherapy. Using a combination of molecular, biochemical, and bioinformatics approaches, they discovered that the nuclear localization of PD-L1 is controlled by acetylation at a single, specific, Lys site. In the nucleus, PD-L1 controls the expression of immune related genes. Therefore, targeting PD-L1 nuclear localization could enhance the efficacy of PD-1/PD-L1 blockade based immunotherapies.