Heteroduplex oligonucleotide (HDO) is a brand new oligonucleotide drug, pioneered by researchers of Tokyo Medical and Dental University, Osaka University and ISIS.
HDO is found to be significantly potent at reducing expression of the target RNA, and also improves the phenotype in disease models effectively. In addition, the high potency of vitamin E-conjugated HDO results in a reduction of liver dysfunction. HDO technology was expected as basic technology of molecular targeted therapy.
The results are scheduled for publication online by Nature Communications on August 10th.

Like any medical drugs, despite progress in the design of oligonucleotides, methods which further increase potency of oligonucleotide drugs and improve safety and tolerability are highly desirable. The insufficient delivery, poor cellular uptake of oligonucleotides and their inefficient access to target RNA are major impediments to in vivo silencing. Then Yokota and colleagues developed a novel short DNA/RNA heteroduplex oligonucleotide (HDO).

“HDO has a structure different from double-stranded RNA used for siRNA and single-stranded DNA used for ASO, and different functional molecular mechanisms from siRNA or ASO in the cells.” says Yokota.

HDO is composed of DNA/locked nucleic acid (LNA) gapmer as ASO and its complementary RNA (cRNA). “When α-tocopherol (vitamin E) as drug delivery moiety conjugated to ASO directly, its silencing effect is reduced because conjugated lipid interfers the mechanisms of ASO. On the other hand,” Yokota says, “When α-tocopherol is conjugated to cRNA of HDO, and α-tocopherol can improve delivery of HDO to the liver by five times, and making the gapmer DNA strand active by its release from HDO due to cleavage of cRNA by cellular nuclease (figure)”

Toc-HDO is significantly more potent at reducing the target messenger RNA compared to the parent ASO. The first author, Dr. Nishina measured the Effective Dose 50 (ED50) which means the dose required 50% reduction of target gene, Toc-HDO targeting Apolipoprotein B (ApoB) mRNA (ED50, 0.038 mg/kg) was 22.2 times more potent than the parent ASO (ED50, 0.841 mg/kg) in liver. In addition to lowering ApoB mRNA the Toc-HDO can reduce serum low-density lipoprotein (LDL)–cholesterol and the pharmacological effects lasted more than one month at a 0.75 mg/kg of Toc-HDO injection only, not at ASO injection.

“A significant improvement in activity is also observed when targeting another gene in the liver. In addition,” Yokota says, “the Toc-HDO using another chemically modified nucleic acid instead of LNA in the wing portion of DNA strand also showed a similarly enhanced potency. HDO technique can applied to any ASO previously reported. Furthermore, the highly potent of the suppression of the target messenger RNA is observed not only rodent but also non-human primate.”

Mipomersen, the first oligonucleotide drug, was approved by FDA, but not by EU due to liver toxicity.
“The high potency of Toc-HDO results in a reduction of liver dysfunction observed in the parent ASO at same silencing effect.” Yokota says, “probably due to much less administered dose of nucleotide.”

These results suggest that DNA/RNA heteroduplex can be the basic technology of the oligonucleotide drug, and opens up a new horizon for human gene therapy as a novel class of oligonucleotide drugs. Yokota says “Our team is currently investigating more detailed mechanisms of the HDO and application of ligand-conjugated HDO to another organs, including brain.” 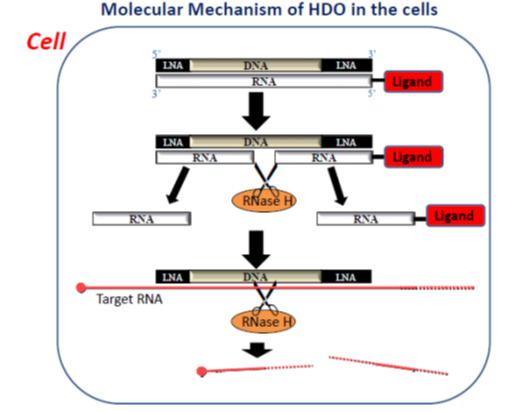