Tokyo, Japan - Normally, the heart contracts and relaxes to a regular beat. In atrial fibrillation, the upper chambers of the heart beat irregularly, which affects blood flow into the two lower large chambers. This can lead to stroke, heart failure and other heart-related complications.

Atrial fibrillation triggers were first identified in the pulmonary veins. Hence, the isolation of these veins has become one of the standard treatments for atrial fibrillation. Subsequently, other sites in the heart have been found to trigger and/or drive atrial fibrillation, including the superior vena cava (SVC). Notably, patients with arrhythmogenic SVC have long myocardial sleeves (circularly and longitudinally oriented bundles of heart cells) around the SVC and high amplitude electrical potentials within them.

Although these anatomical features in arrhythmogenic SVC all point to the possibility of genetic factors being involved in atrial fibrillation, this topic has remained largely unstudied. Furthermore, findings of genetic studies previously conducted in people of European ancestry could not be generalized and transferred to those of Asian ancestry.

This critical knowledge gap drove a team of researchers from Tokyo Medical and Dental University(TMDU) in Japan to study the clinical and genetic factors associated with atrial fibrillation in an Asian population. The team discovered two variants of single-nucleotide polymorphism (SNP), a variation in a single nucleotide that occurs at a specific position in the genome, which were significantly associated with SVC arrhythmogenicity.

“We found that among six variants identified in a previous genome-wide association study in Japanese patients, SNPs rs2634073 and rs6584555 were associated with SVC arrhythmogenicity,” said Yusuke Ebana, first author of the study that was published in July 2017 in Circulation Journal.
“We also determined that SVC arrhythmogenicity was conditionally dependent on age, body mass index, and left ventricular ejection fraction,” Ebana added.

To arrive at that conclusion, the research team conducted a meta-analysis of clinical and genetic factors of 2,170 atrial fibrillation patients with and without SVC arrhythmogenicity across three major hospitals in Japan. Surface electrocardiogram and bipolar intracardiac electrograms were continuously monitored. Additionally, a mapping catheter was placed in the SVC to map the circumferential SVC region using computed tomography (CT) or transesophageal echocardiography as a reference. All the patients were followed-up at least every three months.

“The genes closest to the two SVC variants we found were PITX2 and NEURL1, with the former reported as a left-right determinant in cardiac development,” said Tetsushi Furukawa, senior author of the study. “We speculate that the suppression of NEURL1 in SVC patients with the risk genotype could be the cause of arrhythmogenic SVC leading to atrial fibrillation,” Furukawa added. 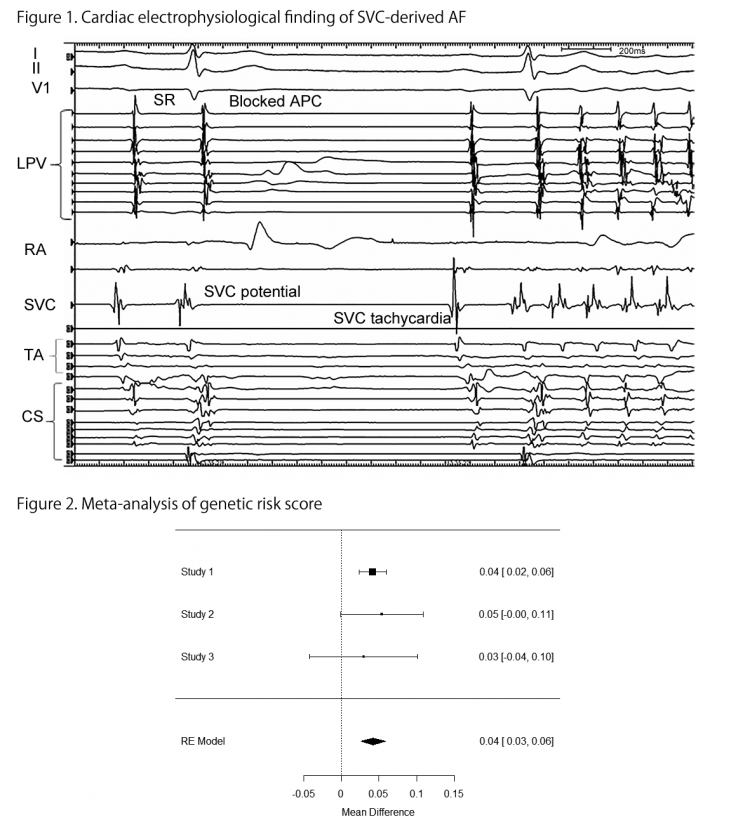 The article, “Association of the clinical and genetic factors with superior vena cava arrhythmogenicity in atrial fibrillation” was published in Circulation Journal at DOI: 10.1253/circj.CJ-17-0350

The genetic factors associated with atrial fibrillation (AF), a condition characterized by irregular heartbeat that can lead to heart failure, have never been identified – until now. Tokyo Medical and Dental University(TMDU) researchers conducted a study on 2,170 AF patients and discovered two genetic variants that were associated with irregular rhythmic beating in the superior vena cava. This study has successfully demonstrated that AF is associated with both clinical and genetic factors.