Researchers from Tokyo Medical and Dental University (TMDU), collaborating with scientists from the Marine Biological Laboratory (MBL) and RIKEN, develop a novel technique for live-cell fluorescent imaging which leads them to discover a new actin structure in starfish early embryos.

Tokyo, Japan – Monitoring alignments of the building blocks of cells is important to understand how the cells are built. By collaborating with imaging scientists at the MBL, researchers from Japan have developed a new probe which they call POLArIS, allowing real-time imaging of molecular orientations in live cells.

“In previous approaches for monitoring the orientation of the protein of interest, researchers needed to develop effective constrained GFP tagging methods which might be different for each protein of interest,” says one of the lead authors of the study, Ayana Sugizaki. “POLArIS uses an antibody-like binder that is rigidly connected with GFP, allowing both specific and versatile constrained labeling,” adds another lead author Keisuke Sato. The team used a commercially available Adhiron molecule (now rebranded as “Affimer”) as the binder molecule to link GFP to a target protein, and developed POLArIS by connecting Adhiron and GFP in a rotationally constrained manner (Figure 1). Because an Adhiron molecule that specifically binds to a molecule of interest can be easily selected from a library of molecules through phage display screening, POLArIS can be designed for any biological molecules of interest. POLArIS can be expressed in specific cell types and organelles, and will be useful for studying architectural dynamics of molecular assemblies in broad range of cell cultures, tissues and whole organisms. “From the point of view of fluorescence polarization imaging, POLArIS has significant advantages because of its genetically encoded nature,” says Tomomi Tani, a Senior Researcher at the National Institute of Advanced Industrial Science and Technology (AIST) in Japan, who has joined this project since he was an Associate Scientist at the MBL. 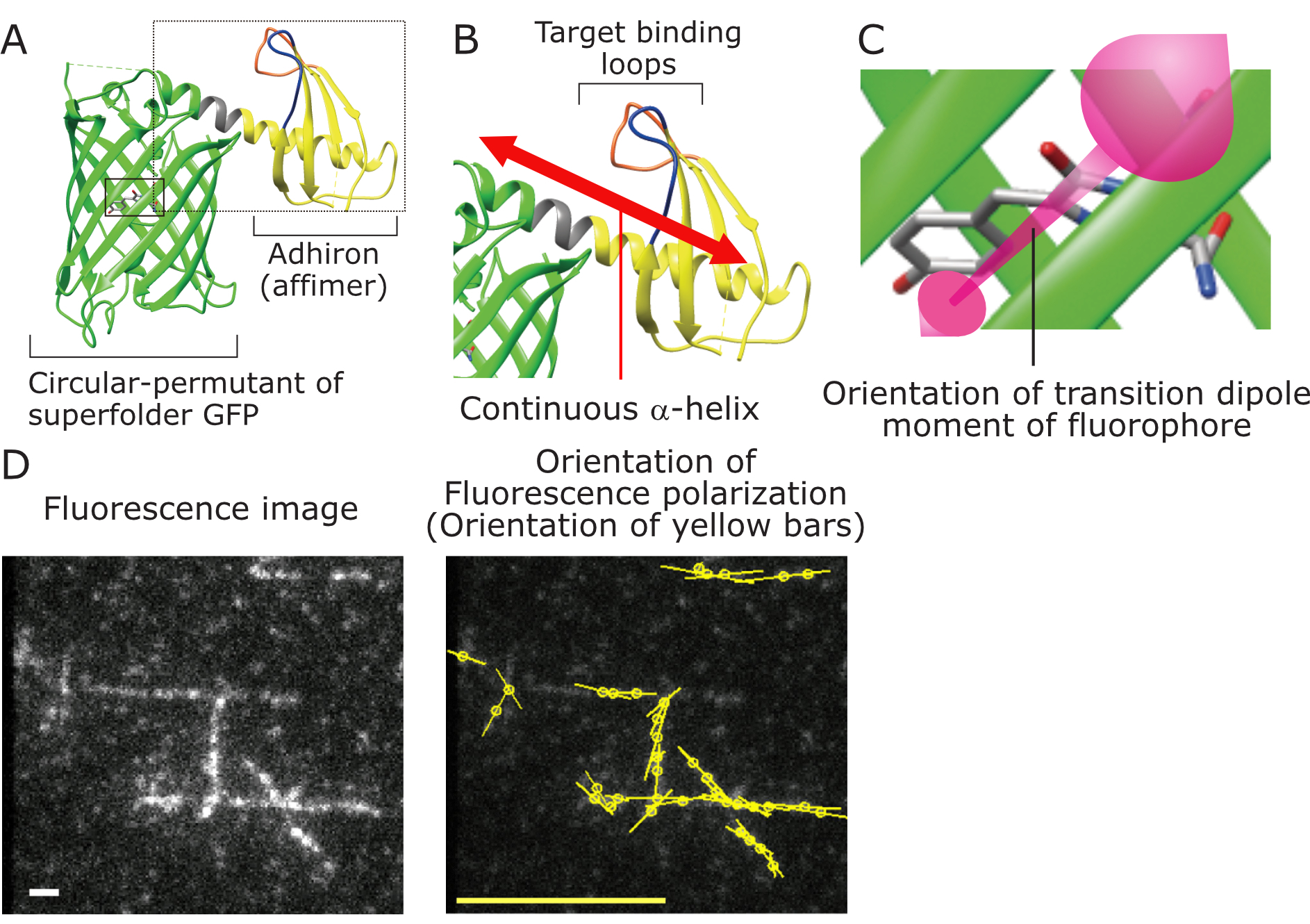 Figure 1
A. Overview of POLArIS structure. Green, Circular-permutant of superfolder GFP (cpGFP); Yellow, Adhiron (Affimer); Gray, α-helical linker connecting cpGFP and Adhiron; Blue and orange, Target binding loops.
B. Enlarged picture of the region of dashed-line box in A. cpGFP and Adhiron are rigidly connected by an α-helical linker.
C. Enlarged picture of the region of solid-line box in A. The orientation of fluorescence polarization of POLArIS reflects the orientation of transition dipole moment of fluorophore indicated by the magenta double-headed arrow.
D. Purified POLArIS protein that specifically binds to F-actin was added to actin filaments reconstituted in vitro, and was observed with fluorescence polarization microscopy. Left: Fluorescence image. White scale bar, 1 μm. Right: Polarization state of fluorescence spots in the left picture was analyzed. Orientation and length of yellow bars indicate the orientation and the strength of fluorescence polarization, respectively. Yellow scale bar, polarization factor=0.5.

By using the probe for actin, the team uncovered transient emergence and dissolution of highly ordered F-actin architecture that they named FLARE structure, in dividing cells of starfish embryo (Figure 2 and Movie 1). “We found that the structure extends up to the cell cortex in association with the astral microtubules,” says corresponding author, Sumio Terada, who had frequently visited the MBL from Tokyo, together with his colleagues in TMDU. “The astral microtubules are responsible for connecting the spindle to the cell cortex and orientating it correctly, controlling the plane of cell divisions.” The mechanisms that determine the cell division plane is the key for controlling many aspects of development, and yet a crucial mystery. The discovery of radially aligned actin architectures will shed light on the most fundamental unanswered questions of cell biology. 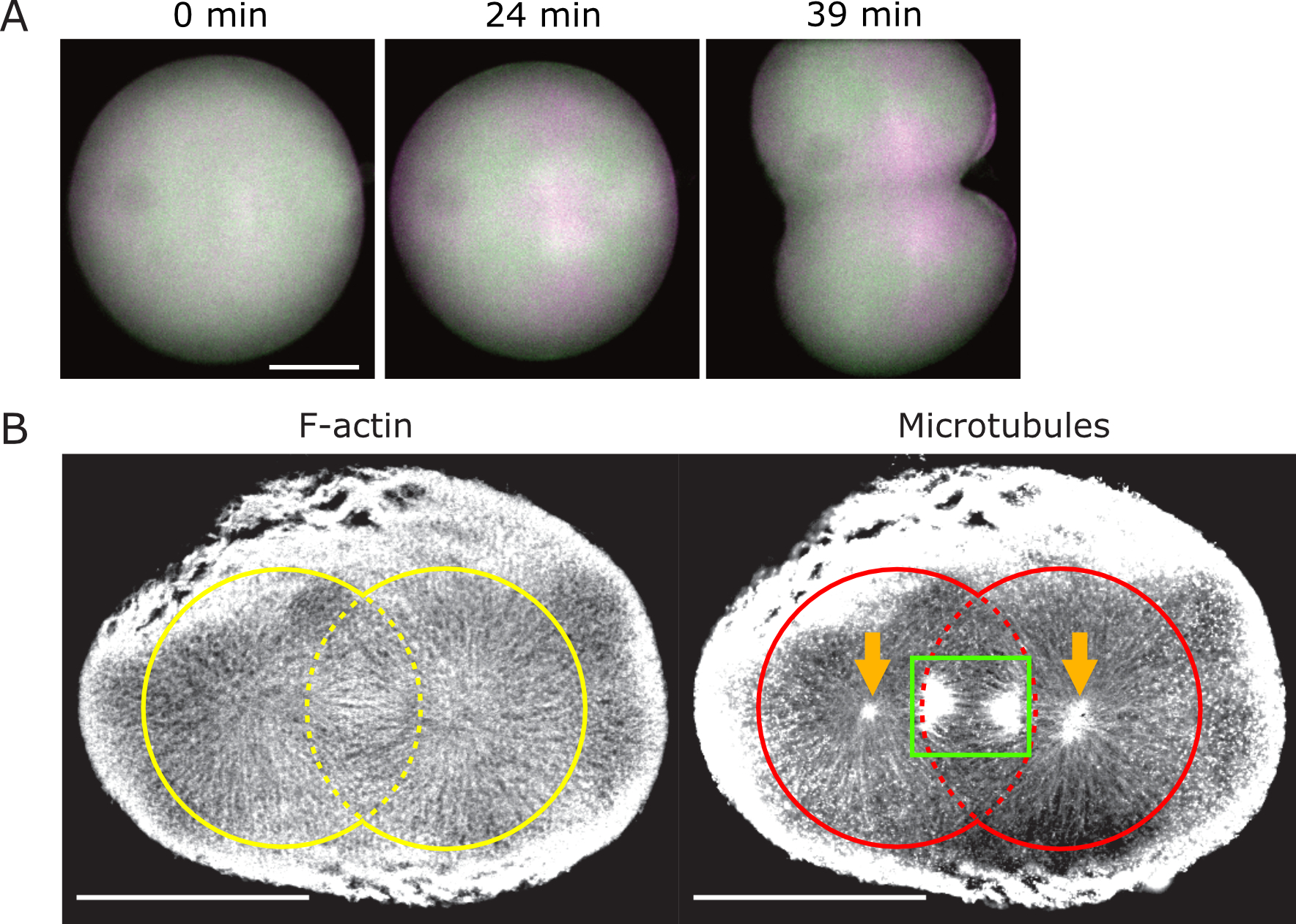 Movie 1
Time-lapse movies of the polarized fluorescence imaging during the first cleavage of a starfish embryo expressing POLArIS that specifically binds to F-actin in a rotationally constrained manner (the same egg as in Fig. 2A). Magenta parts in the left movie indicate horizontally aligned actin filaments and the green parts for those of actin filaments that are vertically aligned. Right, the same movie with enhanced contrast.
###
The article, “POLArIS, a versatile probe for molecular orientation, revealed actin filaments associated with microtubule asters in early embryos,” was published in PNAS at DOI: 10.1073/pnas.2019071118.

Researchers from TMDU, collaborating with scientists from MBL and RIKEN, developed a new probe, POLArIS, for real-time live-cell imaging that reveals the orientation of molecules and is expected to be applicable to a wide range of cell types and specimens. They tested POLArIS in starfish early embryos and discovered the existence of a new F-actin cellular architecture, FLARE, extending alongside the astral microtubules to the cell cortex. This may provide answers to some of the most fundamental questions regarding cell division.