Ventilating the rectum to support respiration

Tokyo, Japan – Oxygen is crucial to many forms of life. Its delivery to the organs and tissues of the body through the process of respiration is vital for most biological processes. Now, researchers at Tokyo Medical and Dental University (TMDU) have shown that oxygen can be delivered through the wall of the intestine to compensate for the reduced availability of oxygen within the body that occurs in lung diseases that cause respiratory failure.

To breathe is to live; for higher animals, respiration involves absorbing oxygen and excreting carbon dioxide at gills or in the lungs. However, some animals have evolved alternative ventilatory mechanisms: loaches, catfish, sea cucumbers and orb-weaving spiders can absorb oxygen through their hindgut to survive in situations where the availability of oxygen is limited. Inspired by these unique adaptations, the team at TMDU devised strategies to allow gas exchange through the lining of the intestine, a process termed as enteral ventilation or EVA.

“The rectum has a mesh of fine blood vessels just beneath the surface of its lining, which means that drugs administered through the anus are readily absorbed into the bloodstream,” first author Ryo Okabe explains. “This made us wonder whether oxygen could also be delivered into the bloodstream in the same way. We used experimental models of respiratory failure in mice, pigs and rats to try out two methods: delivering oxygen into the rectum in gas form, and infusing an oxygen-rich liquid via the same route.”

The researchers prepared the lining of the rectum by rubbing it to cause inflammation and increase blood flow; these changes were confirmed by increased genetic markers and improved the effectiveness of the oxygen delivery. However, because such a preparation requirement would be unacceptable for human patients, the researchers also tried using oxygenated perfluorodecalin (PFD), a liquid that can be safely used in the human body and is already in selective clinical use, and that can carry large amounts of oxygen and carbon dioxide. 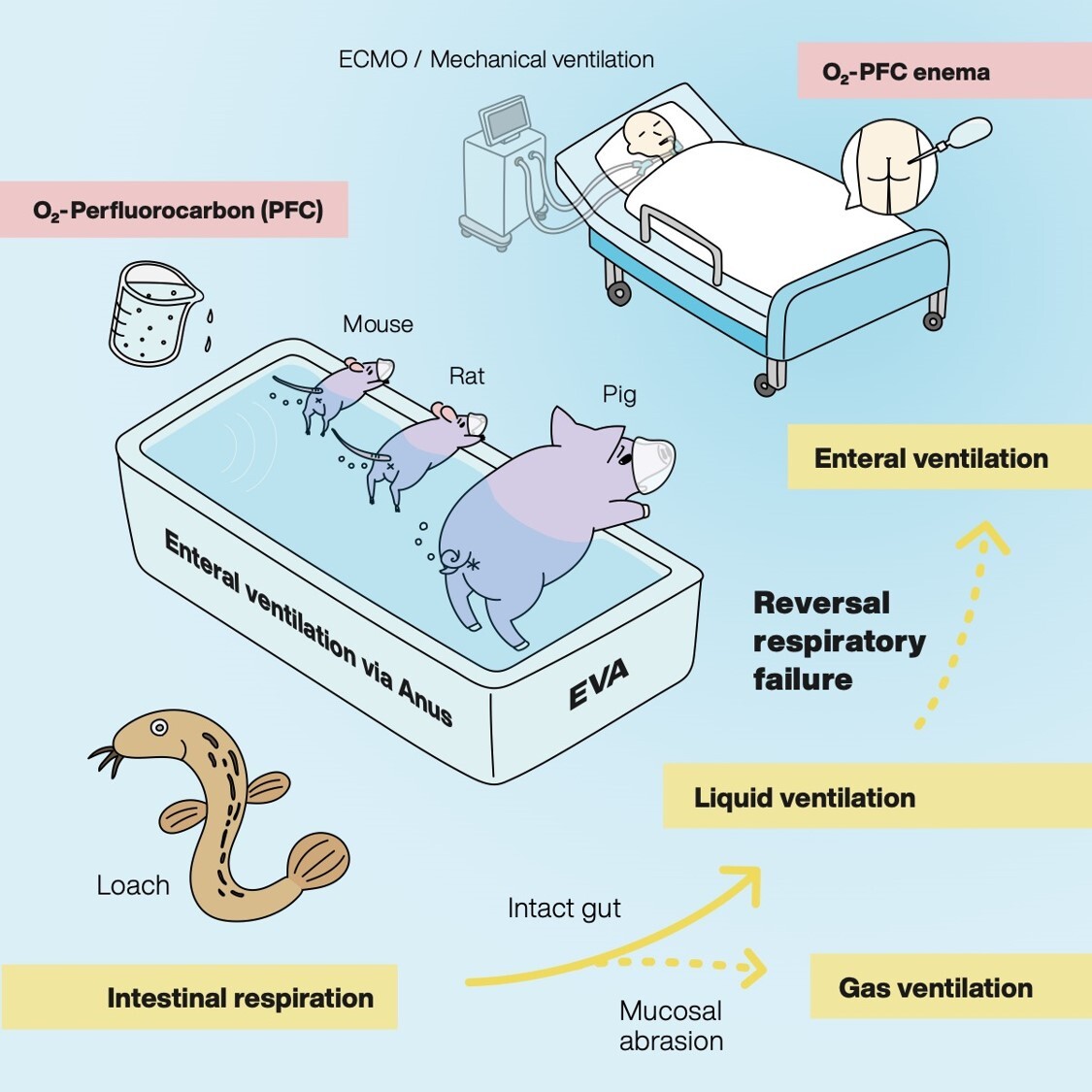 Fig 1. Schematic diagram of EVA method
Based on the fact that loaches have intestinal respiration under hypoxic conditions, the efficacy of the EVA method was examined in mammals such as mice and pigs. The EVA method may be effective for patients with respiratory failure. 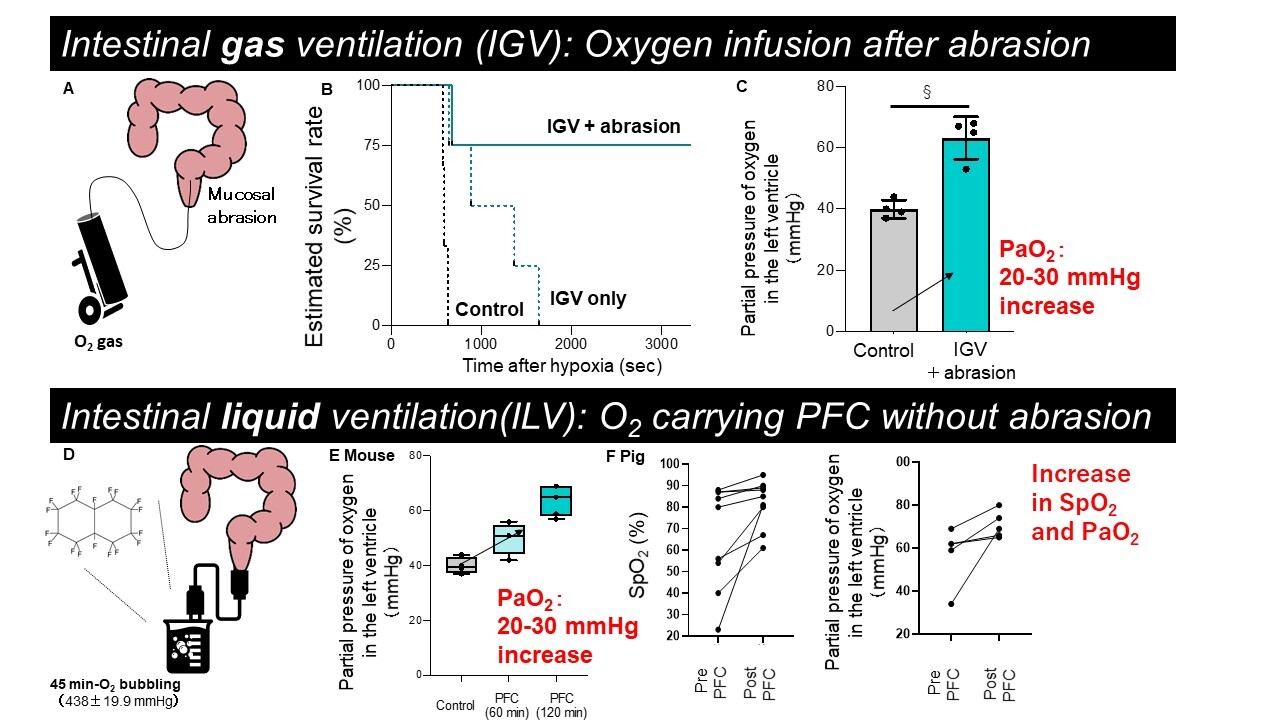 The team demonstrated that delivery of oxygen both as a gas and in liquid form was beneficial: oxygenation levels increased and behavior normalized, while survival was prolonged. The team also confirmed the improvement in oxygenation at the cellular level by immunochemical staining. Furthermore, they found that the minimal amount of PFD that was absorbed along with the oxygen caused no harm, and gut bacteria were not disrupted, indicating the safety of these methods in the animal models.

“Patients in respiratory distress can have their oxygen supply supported by this method to reduce the negative effects of oxygen deprivation while the underlying condition is being treated,” foresees Takanori Takebe, corresponding author. “Enteral ventilation showed great promise in our asphyxia-like experimental model. The next steps will be to test safety of the EVA approach with  more profound mechanistic understanding by which it works; and to establish effectiveness in humans in a clinical setting.”

Conventional therapeutic respiratory support comprises complex technological protocols such as ventilators and artificial lungs. The current SARS-CoV-2 pandemic has highlighted the high need for development of less invasive alternatives such as EVA for short-term support of respiratory function. These new findings from the researchers at TMDU may pave the way for new ventilation strategies in the future.

Researchers from Tokyo Medical and Dental University (TMDU) have demonstrated that delivering oxygen via the rectum as a gas or in an oxygen-rich liquid can support oxygen provision to organs and tissues during respiratory failure. Such “enteral ventilation” increased oxygenation, improved behavior and prolonged survival in experimental mouse and pig models of respiratory failure. Further research may allow its clinical application in human patients as a less invasive alternative to ventilators and artificial lungs.