Tokyo, Japan — Throughout an animal’s lifespan, bone tissue in the skeleton is continuously restructured in response to changes in applied force, such as those associated with exercise and locomotion. Examining how the structure of the jawbone varies with the intense chewing force, or masticatory force, may illuminate the mechanisms that lead to the reconstruction of bone tissue.

Masamu Inoue and Takehito Ono of Tokyo Medical and Dental University(TMDU)have now uncovered how and under what circumstances jawbone reconstruction takes place. Although previous studies found that the hardness of food is correlated with jaw structure, it was not yet clear whether masticatory force could directly impact bone structure. In this study, the researchers uncovered new information about the cellular and molecular changes that enable bone to adapt to changes in mechanical stress.

They did this by creating a novel mouse model of increased mastication in which mice were fed harder foods (hard diet: HD) to increase chewing force. They predict if increased chewing directly lead to changes in jawbone structure using a computer simulation. Histological and gene expression analyses revealed that the mechanical loading onto the jawbone changes cytokine expression of the osteocytes in the bone, resulting in enhanced bone formation. They recently published their findings in Scientific Reports.

“Although there was existing evidence for the correlation between variations in facial profile and differences in mastication force, evidence for causation was lacking” says Masamu Inoue, co-first author. “Additionally, the absence of an animal model of increased mastication made it difficult to study this topic in prior research.”

The researchers found that the width of the masseter muscle, which is critical for mastication, increased in the HD-fed mice. The HD led to more activation in the primary motor cortex of the brain, which controls the masticatory muscles. Thus, the HD increased chewing and the amount of force applied to the jawbone.

In vivo micro-computed tomography (micro-CT) analysis showed that mechanical load onto the jawbone by the HD affected its shape, in the way that predicted by the computer simulation. The simulation also indicated that these morphological changes redistributed the mechanical stress generated in the bone by the HD, indicating that jawbone is able to adapt its shape to changes in mechanical force.

Additionally, they found that increasing the force applied to the jawbone stimulated osteocytes to produce more IGF-1, one of main growth factors that promotes bone formation. This alteration led to bone formation, resulting in morphological changes in the jawbone.

“Our data indicate that masticatory force can prompt changes in facial structure by modulating the function of cells that regulate bone reconstruction,” says co-author Tomoki Nakashima. “This discovery—that increased chewing itself can directly change the shape of the jawbone—could facilitate the development of treatments for skeletal abnormalities, such as jaw deformities.” 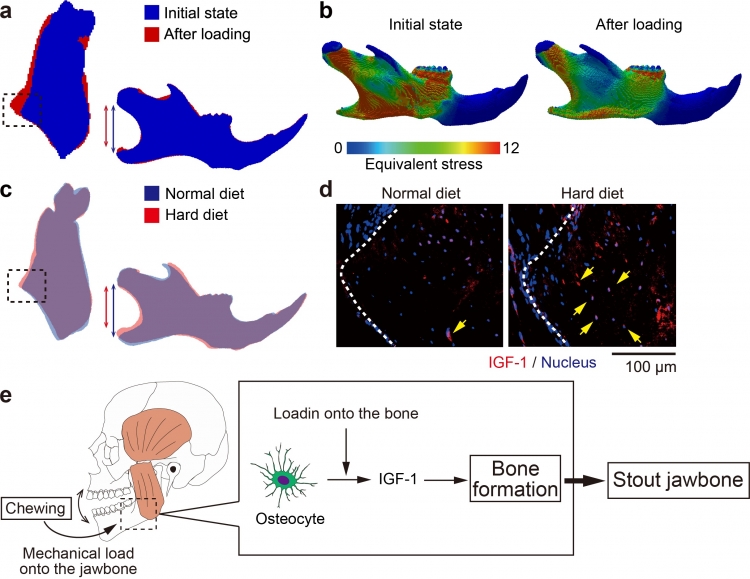 Chewing, or mastication, is thought to impact jawbone structure as bone is continually reconstructed along with alterations in mechanical load. However, the underlying mechanisms are unknown. Here, mice fed a hard diet exhibited greater masticatory force, which enhanced growth factors in the osteocytes in the jawbone and enhanced bone formation. This change was predicted by computer simulation, and confirmed by in vivo micro-computed tomography. Thus, jawbone is able to adapt to the mechanical environment to which it is exposed.