Tokyo, Japan – Immune cells protect their host from infection by pathogens. They include monocytes, which are large white blood cells that can differentiate into scavenger cells macrophages and dendritic cells in response to inflammatory signals. Monocytes are derived from blood stem cells in the bone marrow via an intermediate cell type, the progenitor cell, which is slightly more differentiated than stem cells. Previous research identified a common monocyte progenitor cell (cMoP) in mice that only develops into monocytes. Now, Tokyo Medical and Dental University(TMDU) has identified equivalent monocyte progenitors in humans. This expands what we know about the differentiation process of monocytes and opens up possible therapeutic applications targeting these cells.

Monocytes, macrophages, and dendritic cells express different proteins on their cell surface. The team screened these proteins to identify two (CLEC12A and CD64) that could be used as markers depending on high and low levels of expression. Human umbilical cord blood was then used as a source of a progenitor cell type of monocytes and granulocytes. The team divided this cell population into four subgroups according to the marker expression levels.

One of these subgroups was a population of cells expressing high levels of both CLEC12A and CD64. Growing small colonies of cells in the lab, the researchers showed that this subgroup only developed into monocytes, indicating that they were equivalent to the mouse cMoPs identified previously. Another subpopulation expressing high level of CLEC12A and intermediate level of CD64 could differentiate only into granulocytes and monocytes, while the remaining subgroups lacking CD64 expression could generate dendritic cells. This indicates that the original progenitor contained a mixture of cell types.

Human and mouse cMoPs were shown to share the expression of a number of genes that are typical of progenitor rather than mature cells, and the gene expression characteristics of monocytes ‘monocyte signature’ was also more evident as cell types became more committed into differentiating into monocytes. “Focusing on the expression level and pattern of cell surface proteins, we observed a sequential differentiation process from granulocyte/monocyte progenitors via cMoPs to pre-monocytes then monocytes that was supported by gene expression studies,” corresponding author Toshiaki Ohteki says. “This updates what we know about the human blood cell developmental pathway.”

As monocytes give rise to tumor-associated macrophages (TAM), osteoclasts, and colitogenic macrophages, this finding might shed light also on possible therapeutic applications targeting cMoPs and monocytes.

The work has been published as “Identification of a human clonogenic progenitor with strict monocyte differentiation potential – a counterpart of mouse cMoPs”. 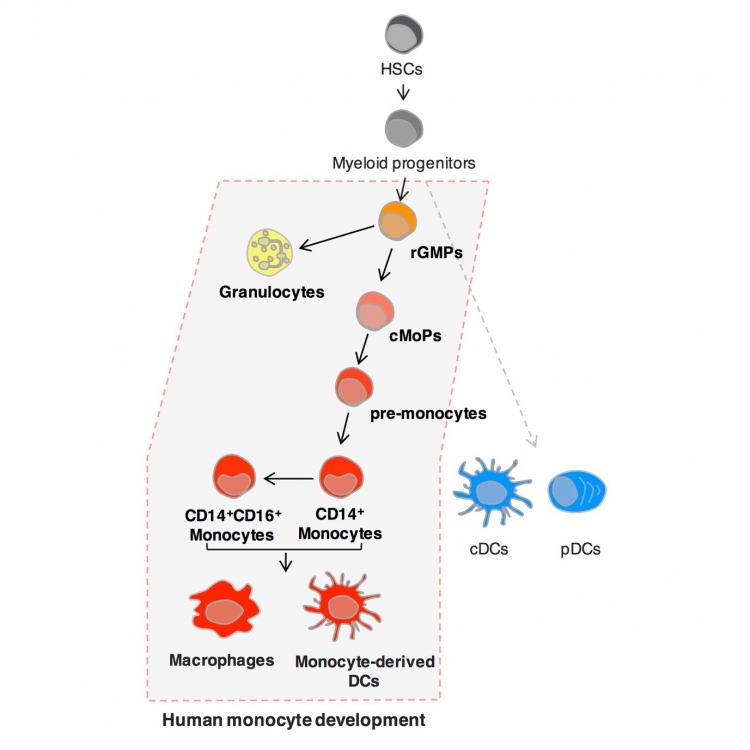 Fig: Identification of human common monocyte progenitor (cMoP)
Monocytes arise from hematopoietic stem cells (HSCs) via sequential intermediate progenitors in the bone marrow (BM), and inflammation can prompt tissue-infiltrating inflammatory monocytes to differentiate into macrophages and monocyte-derived dendritic cells (DCs), which are associated with inflammatory diseases. A common monocyte progenitor (cMoP) that is restricted to the monocyte lineage has been identified in mice but not in humans.

Tokyo Medical and Dental University(TMDU) research has identified a human blood cell type that can only differentiate into monocytes, and is equivalent to mouse cells identified in earlier work. The cells can be recognized by their expression of particular membranous signaling proteins, and were shown to be part of a sequential differentiation process into monocytes. This alternative road map for immune cell development may lead to new targeted therapeutic applications.