HIV has been Had

HIV has been Had

Researchers at Tokyo Medical and Dental University (TMDU) synthesize and test the anti-HIV activity of CD4-mimicking molecules that have an attached polyethylene glycol unit, which may lead to improved treatments to prevent the development of AIDS

Tokyo, Japan – A team of scientists led by the Institute of Biomaterials and Bioengineering at Tokyo Medical and Dental University (TMDU) have created novel molecules that prevent human immunodeficiency virus (HIV) particles from attacking immune cells. This is accomplished by injecting compounds mimicking the protein the virus usually uses to enter the cells. This work may lead to new treatments for HIV that may be more effective at stopping the proliferation of the virus with fewer side effects.

HIV is a very dangerous pathogen because it attacks the very immune cells, including T helper cells, that are needed for the body to fight back. An HIV particle first gains entrance to a T helper cell by attaching to a CD4 protein on its surface. Once inside, the reproduction machinery of the T helper cell is hijacked to make copies of HIV, ultimately killing the host cell. Many treatments, such as antiretroviral drugs, attempt to block this reproduction process, but finding a way to prevent the HIV from attaching in the first place would be a better approach.

Now, a team of researchers led by Tokyo Medical and Dental University (TMDU) created a new family of molecules that act as decoy CD4 proteins. The HIV particles preferentially attach with the fake molecules, instead of those at the surface of a cell. The scientists found that adding a polyethylene glycol (PEG) improved the pharmacokinetics. “Hybrid molecules that mimic CD4 and also have a PEG unit attached with an uncleavable linker showed better anti-HIV activity with lower cytotoxicity,” first author Takuya Kobayakawa says. 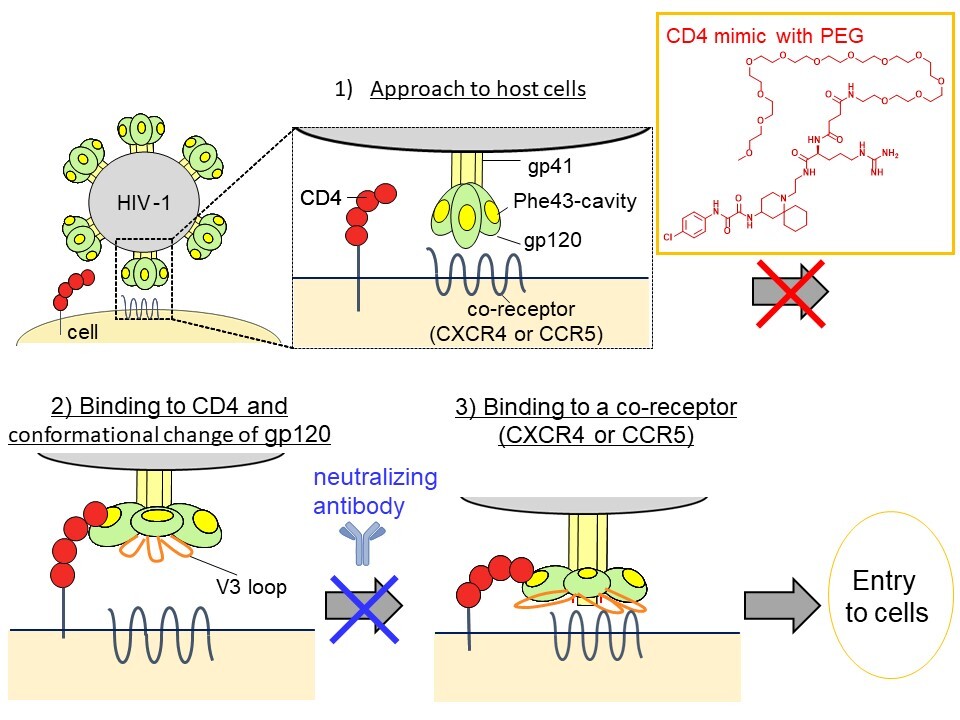 Figure title: Mechanism of the HIV entry to cells and its block by a CD4 mimic bearing PEG and a neutralizing antibody.

Mechanism of the HIV entry to cells and its block by a CD4 mimic bearing PEG and a neutralizing antibody.
The V3 loop of an HIV envelope protein gp120 is exposed by the conformational change of 2). A CD4 mimic with PEG blocks the progress from 1) to 2) (the first arrow), and a neutralizing antibody blocks the progress from 2) to 3) (the second arrow). Without these drugs, HIV enters cells.

Computer simulations run by the team supported the hypothesis that the hybrid molecule works better because it can interact electrostatically with a carboxylate group on the virus. In tests with a rhesus macaque, the hybrid molecule remained in the system longer compared with the parent compound. “These CD4 mimics have strong synergistic interactions with neutralizing antibodies for fighting HIV,” senior author Hirokazu Tamamura says. New combined treatment protocols may be developed to help take advantage of the new molecules. The work is published in the Journal of Medicinal Chemistry as “Hybrids of Small-Molecule CD4 Mimics with Polyethylene Glycol Units as HIV Entry Inhibitors.” (DOI:10.1021/acs.jmedchem.0c01153).

Tokyo Medical and Dental University (TMDU) researchers developed a class of molecules that mimic the structure of the CD4 proteins to divert HIV attachment to T helper cells. This work may lead to more effective treatments that are less likely to be affected by resistance mutations.