Prof. Tetsuya Nakamura, Prof. Mamoru Watanabe, Dr. Tomohiro Mizutani, Dr. Masayoshi Fukuda and their research team at Tokyo Medical and Dental University (TMDU) have shown the first evidence that stem cells of the small intestinal (SI) epithelium are able to reconstitute normal epithelia when grown in the lab and then transplanted back into mouse models of colonic epithelial injury. The research team hopes that their study facilitates intestinal stem cell research and builds a basis for the future development of stem cell therapy for various intestinal diseases in humans. This study was conducted as a collaborative research project between the Dept. of Gastroenterology and Hepatology, Research Center for Medical and Dental Sciences, Dept. of Human Genetics and Disease Diversity and Dept. of Advanced Therapeutics for GI Diseases at TMDU. The study, supported by MEXT KAKENHI, JSPS KAKENHI, the Regenerative Medicine Realization Base Network Program from Japan Science and Technology Agency, and Research Grants for research on Intractable Diseases from Ministry of Health, Labor and Welfare of Japan, was published online in Genes & Development on August 15, 2014 (EST).

Main findings and significance of this study

Despite having some common features, epithelia of the small intestine (SI) and colon show many differences. They differ in their structures as well as their cellular components, as exemplified by Paneth cells that reside only in the SI (Figure 1). For future advancement of stem cell therapy for SI diseases, it is essential to investigate whether SI epithelial stem cells, that are taken from the body and grown in the laboratory, are able to reconstitute the normal tissue when they are transplanted back into the body. Recent advances have enabled expansion of intestinal epithelial stem cells in culture dishes, which means that the first technical barrier has been well overcome. However, the next step, i.e., assessment of the feasibility of intestinal epithelial stem cell transplantation, has not yet been well established. The research team led by Prof. Nakamura has previously reported that cultured colonic stem cells are able to regenerate functional epithelium when transplanted onto injured colons in mice. By extending this approach, the research team has now investigated whether cultured SI stem cells could regenerate epithelia when transplanted, and also how they would behave when placed in a different environment. 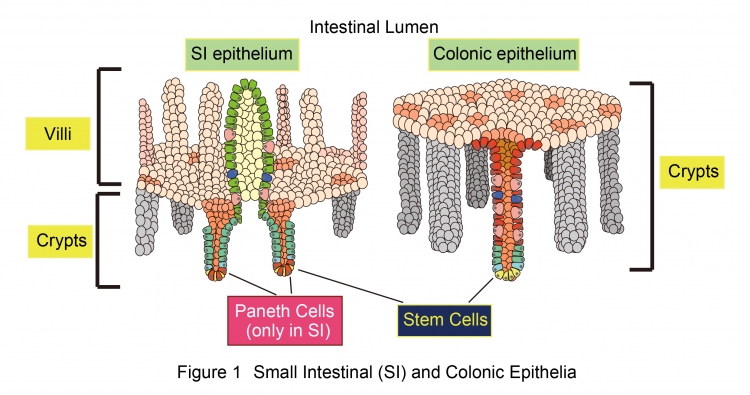 In their experiments, SI epithelial cells, obtained from genetically engineered mice in which all cells are labeled by fluorescent protein, were cultured and then used as donor cells. Meanwhile, mucosal injuries were generated on the distal-most part of the colon in mice, and these were used as recipients (Figure 2). Shortly after the intra-colonic infusion of donor cells, it was found that they could adhere to and cover the denuded colonic mucosa in recipients. Moreover, at later time points, the transplanted SI cells were shown to contain all types of terminally differentiated cells of the SI epithelium as well as the epithelial stem cells of SI phenotype, even in the colonic milieu. In addition, the intestinal villi, typical structures unique only to the SI but not to colon, were clearly visible in some parts of the graft. Together with the presence of functional Paneth cells in the transplanted epithelia, the study concluded that cultured SI stem cells are able to function as genuine stem cells to reconstitute normal epithelia of SI phenotype, even after being heterotopically transplanted (Figure 2).

This study provides the first evidence that cultured SI stem cells could be a source for cell therapy for various intestinal diseases in humans. Moreover, the study highlights the presence of epithelium-intrinsic mechanism(s) that allows adult intestinal stem cells to maintain their identity along the gastrointestinal tract. 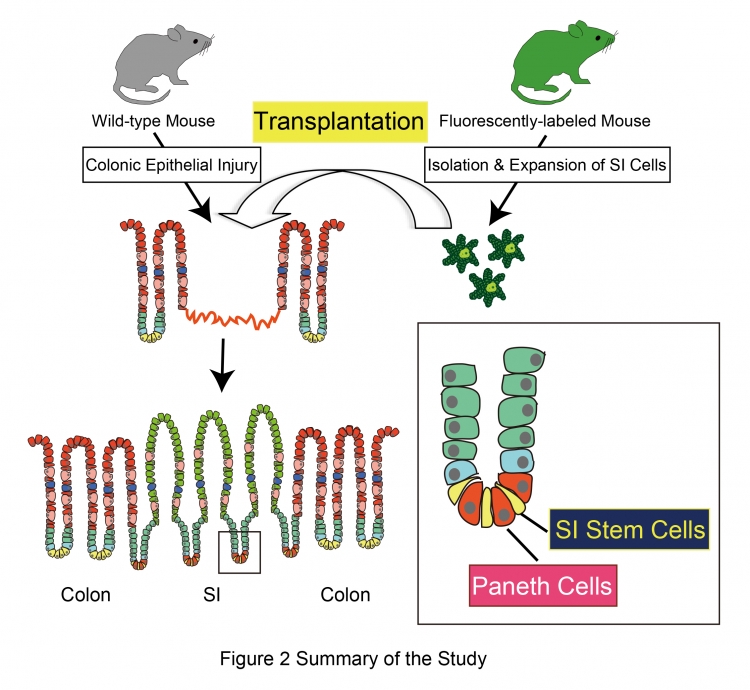