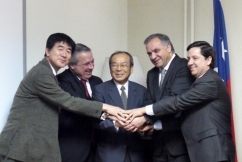 What is the Latin American Collaborative Research Center?

Currently, Tokyo Medical and Dental University (TMDU) is collaborating with the Clinica Las Condes (CLC) in Santiago, the capital city of Chile, in order to support the Chilean national project for the early detection, diagnosis, and treatment of colorectal cancer (CRC). The Latin American Collaborative Research Center (LACRC) has been established within the CLC (Fig.1) as one of TMDU’ s overseas activity centers, according to the agreement between TMDU, CLC, and the Chilean Ministry of Health.

LACRC will be a base of TMDU activities not only for supporting the CRC project in Chile but also for collaborating in clinical and scientific research. Research activities in the fields of molecular biology, translational research, and pathology will be focused on collaborative, multi-center, and transverse research projects including the CRC screening program.

LACRC will begin working from April 2010. TMDU will dispatch selected faculty members in stages. Dr. Takashi Ito, a brilliant young pathologist who has recently won the TMDU research award, will be the first TMDU faculty member to start working there. In the near future, LACRC will include an endoscopist, a molecular biologist, and a research tech-nology specialist, as core members for our collaborative activities.

In the year 2010, the Republic of Chile cerebrates the 200th anniversary of the nation’s foundation. The Chilean government has already begun a project titled “Becas Chile” in which they will provide an oppotunity for many young Chilean doctors to study abroad. TMDU will support these doctors in their clinical and research training in Japan, in conjunction with CLC and LACRC. At the same time, TMDU is planning to enable TMDU 4th year medical students to perform research (project semester scheme) in LACRC under the supervision of CLC professors.CLC and TMDU have a common policy to expand our activities in Latin America. For 15 years, TMDU had provided a JICA training course. A total of 146 doctors completed the course, and many of these doctors are now working in various Latin American countries. TMDU expects that these doctors can work together in LACRC, supported by JICA as a followup training scheme.

TMDU has just begun providing the academic support for CRC project in Chile. LACRC should be a support center for the project. Collaborative research will be done in the CLC advanced research center. In the research center, many doctors and students from CLC, TMDU, and the University of Chile will be working together.LACRC will provide overseas experience for TMDU faculty and students. TMDU doctors, working hard in the hospital, will be given a chance to concentrate on research. TMDU researchers can proceed with their own research topics independent from TMDU professors. TMDU students will be motivated in their research and international activities through such an early exposure.

TMDU activities leading to the establishment of LACRC

Over a period of 15 years (1991~2006), TMDU had provided a JICA training course for three months every year for Latin-American doctors (146 doctors total) on histopathological diagnosis of early esophageal, gastric and colorectal cancers. During the course, the doctors learned advanced technologies and knowledge for early diagnosis and treatment of gastrointestinal cancers and came to understand that cancer screening for asymptomatic people is essential for detecting such early cancer lesions.

TMDU Professor Kyoichi Nakamura and his colleagues including Drs. Morio Koike and Yoshinobu Eishi had been working in Santiago (1992~1997) for a Latin American training course in digestive diseases organized by Professor Pedro Llorens and supported by JICA. During the course, many Latin American doctors learned endoscopic and pathologic techniques and knowledge of digestive diseases focusing especially on gastric cancer.

In 2007, Chilean doctors including Dr. Francisco Lopes in CLC launched a small pilot study (3,500 people) of CRC screening with IFOBT. Based on the results, CLC and Chilean Ministry of Health planned to implement a large national project with academic support from TMDU. TMDU received a letter of intention; that is, an official application from CLC requesting TMDU support for the Chilean national project to reduce the currently-increasing mortality rate of CRC. TMDU has basically agreed with the proposal as of the end of 2008. Responding to the CLC proposal, Dr. Takashi Ohyama, TMDU President, visited Santiago to meet Mr. Alfredo Schonherr, chief executive officer of CLC, and Dr. Alvaro Erazo, Chilean Minister of Health. On 15th July 2009, they signed a memorandum of understanding (MOU) between TMDU, CLC, and the Ministry of Health for their collaboration in the national project (Fig.2). TMDU and CLC have also signed an MOU for collaboration in the training course to be held in CLC every year for five years.

According to the MOU, TMDU mission members visited CLC at the end of August 2009 to attend the symposium for early diagnosis and treatment of CRC. They were also involved in many meetings to discuss several research topics on which they can collaborate in future, including a prospective randomized trial which would be the world’s first study for elucidating the effectiveness of the IFOBT-related method to reduce the mortality rate of CRC.

When CLC mission members visited TMDU on 4th November 2009, they signed a MOU for the establishment of LACRC in CLC (Fig.3). According to the MOU, CLC shall provide an office and an official secretary to TMDU at no expense, and from April 2010 TMDU shall dispatch research staff to LACRC for the purpose of further collaborative activities. It is understood and mutually agreed that the establishment of LACRC is for the purpose of improving public health and promoting the welfare of Latin Americans through joint research and the maintenance of a partnership between TMDU and CLC.

According to the establishment of LACRC, the TMDU mission, including Dr. Kikuo Ohno, Dean of Faculty of Medicine, and Dr. Ikuo Morita, Trustee of Research, visited CLC at the end of December 2009 (Fig.4) to discuss TMDU activities in LACRC and future possibilities for this TMDU overseas research center. At the meeting with the Chilean Minister of Health, Dr. Erazo proposed to provide a national budget for the pilot study of CRC screening in the Santiago metropolitan and 5th regions. The Minister requested TMDU to dispatch pro-fessional colonoscopists to participate in the CLC training program for young Chilean doctors who will be later involved in the national project.

At the end of January 2010, the TMDU mission, including Dr. Yasuyuki Yoshizawa, Trustee of Medical and Dental Treatment, visited Santiago to sign an agreement between TMDU, CLC, and the Ministry of Health for collaboration to operate the large national program of CRC screening in Chile. This Program, which will involve a group of 72,000 people for 5 years, will classify participants by risk levels and by age (older than 50 years old), and will have the purposes:
PAGE TOP