The Xa Factor : Pushing Back on Atherosclerosis

Atherosclerosis is a chronic disease and is one of the major causes of death worldwide. The current situation as regards treatment for this disease is mainly based on drug therapy, however, the maximum efficacy of these therapies for inhibiting the progression of the disease remains at only 30%–40%.

For some time now there has been increasing evidence that a direct oral factor Xa inhibitor plays a large role in the attenuation of atherosclerosis by the suppression of protease-activated receptor 2, which we shall call PAR2. The problem to this point however, has been in coming to an understanding of the precise mechanism by which the promotion of this atherogenesis occurs.

New research by the team now shows that the administration of Rivaroxaban (RIV) in a sufficient dosage can enable the suppression of activity by the factor Xa, and effectively attenuates the atherosclerotic areas in mice. RIV is widely used as a potent anticoagulant agent for preventing cerebral embolism in patients with atrial fibrillation and pulmonary thromboembolism. Studies have demonstrated that it can be greatly effective in reducing the risk of death from coronary artery diseases and that it can also play a significant role in suppressing the progression of atherosclerosis.

In the present study, the focus was on exploring the detailed mechanism whereby RIV attenuates atherosclerosis progression and thus aids in the stability of advanced atherosclerotic lesions in mice.

Several previous preclinical studies had clearly demonstrated that RIV alleviated the progression of atherosclerotic lesions and promoted plaque stability in mice, however, details with regard to the mechanism by which RIV negatively regulates the progression of atherosclerotic lesions and plaque instability still remain unknown.

Observations made in these previous studies led the team to hypothesize that factor Xa-mediated PAR2 activation and thus played a critical role in the progression of atherosclerosis, partially through the downregulation of the autophagy machinery. The new research shows clearly that RIV actually attenuates atherogenesis by inhibiting the factor Xa–PAR2-mediated suppression of macrophage autophagy, and thus abrogates inflammasome activity.

Though previous studies supported the anti-atherosclerotic effects of RIV, there were a lot of divergence in results.  It was therefore postulated that the possibly small dosage of RIV administered was not sufficient. To solve this problem, the optimal dosage of RIV to effectively suppress Factor Xa activities in mice was determined.

The US Food and Drug Administration has approved RIV for reducing the risk of major cardiovascular events in people with chronic coronary or peripheral artery diseases. However, it is important to determine the mechanism by which RIV suppresses atherosclerosis to establish RIV as a novel anti-atherosclerotic drug worldwide. Current findings may provide strong evidence for the clinical use of RIV through a better understanding of how it actually works.  This increased clarity may help us turn the corner in treating one of the worlds most notorious diseases and alleviating the danger it presents to patients throughout the world. 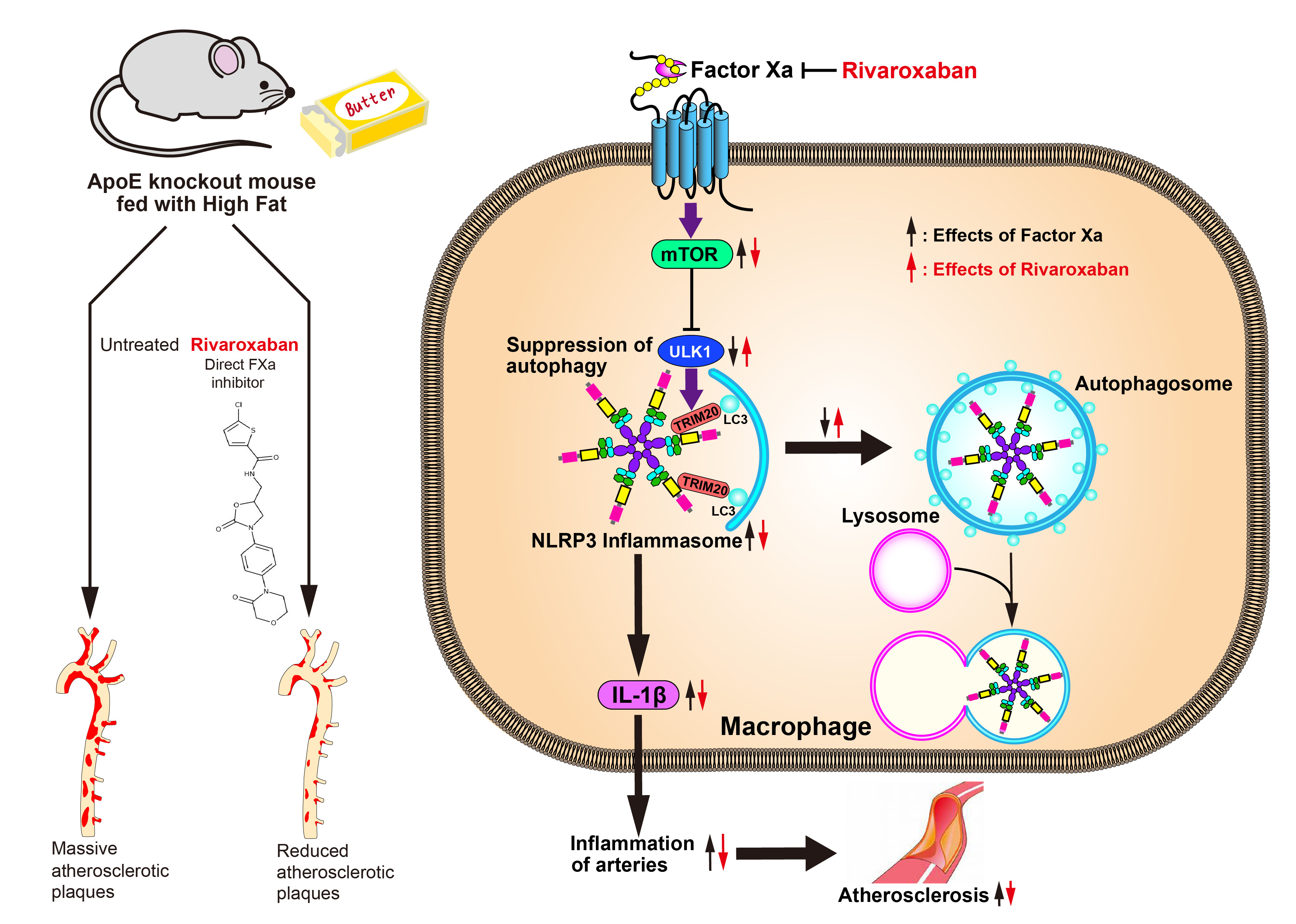