Associate Professor Miki Yokoyama of the Department of Biochemistry and graduate students, including Daisuke Yamamoto, of the Department of Maxillofacial Surgery, Graduate School of Medical and Dental Sciences, Tokyo Medical and Dental University demonstrated that the intracellular localization of claudin-1 in pathology specimens at the invasive front of tongue cancer is associated with cervical lymph node metastasis. This study was funded by the Japan Agency for Medical Research and Development (AMED) Next-Generation Cancer Therapy Research Project (P-CREATE) "Elucidation of the mechanism of malignant transformation of oral cancer and the search for new therapeutic targets based on the mechanism" (Principal investigator: Tetsuro Watabe) and the Ministry of Education, Culture, Sports, Science and Technology's Grants-in-Aid for Scientific Research. The research results were published online in the international scientific journal, Cancer Science, on December 20, 2019 (Eastern Time).

Claudin-1 is a protein that exists on the cell membrane and forms the tight junction between adjacent cells to restrict the movement of substances. In the oral cavity, claudin-1 exists in the basal layer of the stratified squamous tissue and functions as a barrier to prevent the invasion of foreign matter. Recent studies have reported that claudin-1 in cancer cells possesses a different function which contributes to the survival of cancer cells and conduces to their invasion into surrounding tissues. However, investigations of the correlation of claudin-1 expression levels in tumors including pulmonary adenocarcinoma, and prostate, rectal, colorectal, and breast cancers with their malignancies revealed conflicting findings, with some studies reporting an association of high claudin-1 expression with a lower survival rate and higher malignancy and other studies reporting vice versa. These findings suggest that, when considering the relationship between claudin-1 and malignancy, focusing on its expression level alone is insufficient.

In the present study, immunohistochemical staining of claudin-1 was performed using surgical resection specimens of tongue obtained from the Department of Maxillofacial Surgery of Tokyo Medical and Dental University. While no correlation was found between claudin-1 expression levels and the clinical pathological findings, in cases of high levels of claudin-1 expression, claudin-1 was mostly localized on the cell membrane in the tumor center whereas, at the invasive front, translocation into the cells were observed in some cases (Figure 1). When cases of high claudin-1 expression were divided into two groups, one with claudin-1 localization within the cells at the invasive front and the other with claudin-1 localization on the cell membrane, the former group was found to have a significantly higher frequency of cervical lymph node metastasis. 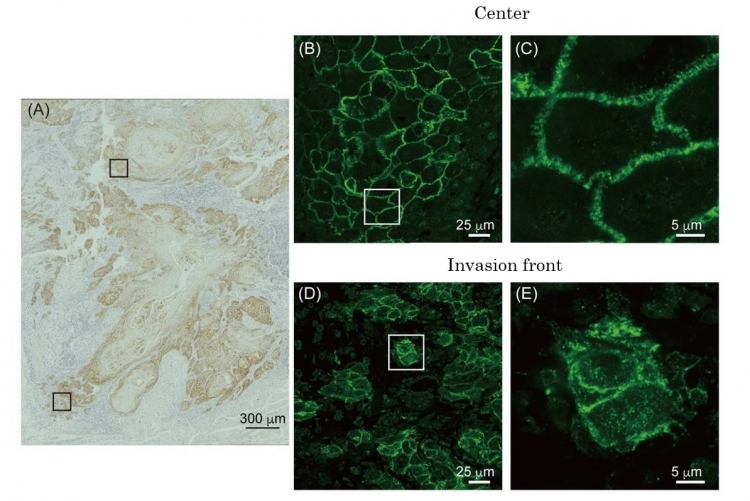 Fig.1: A pathological specimen of tongue cancer showing claudin-1 within the cells at the invasive front.

The areas immunohistochemically stained by anti-claudin-1-antibody enclosed in the squares (A) were observed using a confocal microscope after fluorescence staining (B-E).[Yamamoto et al., Cancer Science (DOI:10.1111/cas.14249)]

To investigate further the relationship between claudin-1 and cancer invasion, SAS cells derived from tongue squamous cell carcinoma were biochemically analyzed. The results of the analysis showed that claudin-1 was translocated into the cells via endocytosis, and that an endocytosis inhibitor was able to suppress the motility of SAS cells. Further, depletion of the claudin-1 within the SAS cells was found to enhance the motility of the SAS cells. These findings suggest that when claudin-1 is localized on the cell membrane and functions to conjoin adjacent cells, the motility of the cells decreases, but that when claudin-1 is depleted from the cell membrane by its translocation to the intracellular environment, cell motility increases, in other words, the likelihood of invasion increases (Figure 2). 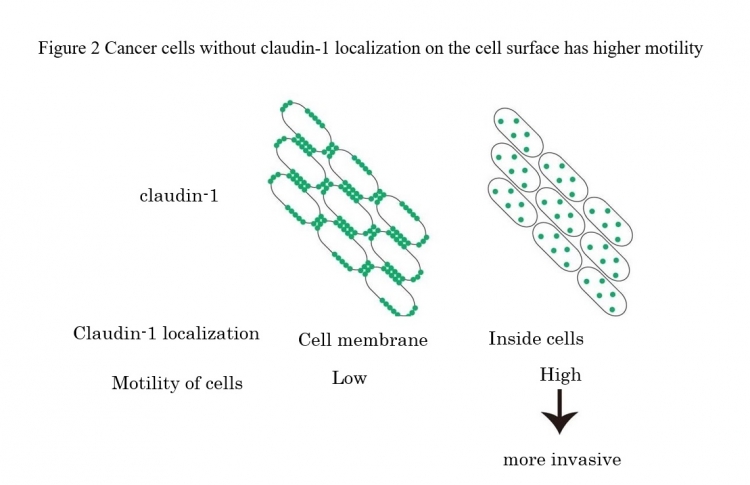 Significance of the Research Results

*1 Claudin-1
One of the 27 members of the claudin family proteins. Each claudin protein possesses a four-transmembrane structure and forms tight junction.

*2 Tight junction
A type of cell adhesion apparatus which forms between epithelial cells. Claudin-1 molecules on the cell membrane of adjacent cells bind with each other to prevent free movement of foreign matter between the cells. Tight junction also maintains cell polarity. 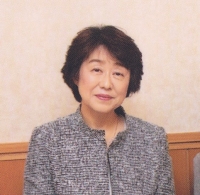